Showing posts from May, 2012
Show all

I became an Aaron Sorkin nerd about five years ago.  My dad bought me the Sports Night boxset (all two seasons of it) and during a relatively lazy and unexciting time in my life I would spend days watching both seasons over and over to the point where I'd memorized a large majority of the show's more quotable moments.  Five years later, I can probably quote roughly 50% or more of every single episode at this point.  For those who don't know, Sports Night is a sitcom set behind the scenes of a SportsCenter-esque sports news show.  I saw an interview with Sorkin once where he said that people would always ask him whether Sports Night was a drama or a comedy and his response was that it was neither which I think is the perfect answer.  Family Guy joked once that Sports Night was "a comedy that's too good to be funny" and as one of its biggest fans, it's hard not to laugh at how much truth there is in that.  It just really doesn't try very hard to be a dr
2 comments
Read more 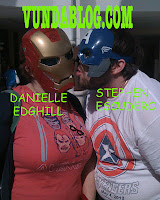 DANI & STEPHEN'S  AVENGERS MARATHON DAY  On May 3rd of the year 2012, there cam a day like no other, we took time off from work to go to AMC SUNSET PLACE and sit through a Marvel movie all day marathon. We took pictures and met cool people and got our minds blown yet again by the Avengers.   The HALF ASS-embled Avengers. I 'm really just jealous. Thor makes the team though, I have a crush on him. The Marvel Marathon consisted of all five of the previous Avenger outings, Iron Man, The Incredible Hulk, Iron Man 2, Thor, and Captain America, culminating in the midnight 3D release of The Avengers. We at Vundablog had already seen Avengers, but watching it again was no less exciting and thrilling than the first time. Plus, we got to see the scene that they had been hinting at, the "emergency filmed" scene, and let me just say, it cements my love for Joss Whedon for all time. See after the jump for more pictures from the
Post a Comment
Read more
More posts