Showing posts from May, 2013
Show all

I've waited so long to hear someone with a national voice utterly destroy PolitiFact for their ass backwards brand of fact checking that involves, among other things, including every possible interpretation of the statements they "fact check" in their final analysis of how true said statements are. Along comes Rachel Maddow to show me why I had to stop watching her in the first place by doing just a horrible job of depantsing PolitiFact. Does she outline the ridiculous reasons PolitiFact uses in their analysis of this statement (let alone other statements)?  Barely.  Does she bring in other examples of PolitiFact's overwhelming desire to appear as moderate/neutral/impartial (read: middling) as possible stomping all over any ability to truly be any sort of neutral arbiter of factual information?  Surely you jest.  Instead, in true Rachel Maddow form, she engages in a dizzying, circuitous exercise of contemptuous, condescending verbal gymnastics specifically desi
Post a Comment
Read more

RAW 5/6/13 -God dammit, Cena.  It's not bad enough you co-opted Daniel Bryan's "YES!" chants while he was fighting in a match that you cost him?  You had to cut an ENTIRE PROMO based on co-opting his chants?  This is incredibly annoying, even for you.  I can't even believe I just said that but there it is. -THANK YOU VICKIE *clap clap clapclapclap* -Seriously, though, I'm really starting to love Vickie and her "EXCUSE ME"s.  Not so much that "Cougar" necklace, though. -Seriously, though, John Cena is ten years old.  There are few things in wrestling less compelling than him insulting people.  In five minutes he has derided Ryback for "running away screaming like a little girl" because he wisely decided against a match against The Shield that most likely would have ended up with him getting the crap kicked out of him, called him a "complainer" for calmly explaining his legitimate issues with Cena, done a super fuc
Read more

-Sting won't settle for the best.  He needed the best of the best.  So he called the 44-year-old.  To be fair, Angle is 10 years younger than Sting, which probably makes him an up-and-comer in the eyes of The Icon. -So I'm assuming AJ Styles has been told by TNA Creative to avoid speaking at all costs.  So, for about the 74th time, AJ shows up to face someone who has called him out only to say and do nothing except a lot of brooding and then symbolically walk away.  Angle ain't having it, gets physical with AJ, leading to a brawl, which leads to Stung getting laid out by 3D for the first time ever (which I honestly enjoyed more than a little bit).  So now we still don't know who the third man on Stung's team is.  God help me if it's Hulk freaking Hogan.  (JO-SEPH-PARK!  JO-SEPH-PARK!  JO-SEPH-PARK!)  Meanwhile this AJ Styles storyline continues to go absolutely nowhere and take fucking forever to do it thanks in no small part to AJ's unique communication
Post a Comment
Read more

Bush is at his wacky antics again this week in a montage! Even Rocky had a montage.
Post a Comment
Read more

Here at Vundablog.com we want to honor and respect the comic book gods. And one such god is Steve Ditko. In Search of Steve Ditko is a fascinating documentary narrated by Jonathan Ross of the BBC. This documentary is a great chance to see lots of cool Steve Ditko art and learn about the man who designed the Spiderman suit and some of the most influential comics of all time. They not only talk about the Marvel books like Spiderman and Dr. Strange but also his later creations at Charlton Comics like the Question and Mr. A and his DC creations the Creeper, and Hawk and Dove. Ditko's story themes and morality tales are dissected by comics greats like Joe Quesada, John Romita, Alan Moore, Mark Millar, Neil Gaiman, and Stan Lee. The documentary explains Ditko's complicated objectivist political ideology that falls in line with over-hyped writer Ayn Rand.  Alan Moore talks about how Rorschach is inspired by Ditko's work. Hearing John Romita worry about his art style on Spider
Post a Comment
Read more

RAW 4/29/13 Langston/Rodriguez/Colter -Big E Langston takes on Ricardo Rodriguez and Zeb Coulter in a three-way dance and the winner gets to pick the stipulation for the match at Extreme Rules?  Oh, this is GENIUS.  Especially if Big E doesn't win.  Actually, Big E winning would be way too obvious.  I fully expect him to lose.  Especially since triple threat matches are always No DQ. "NO!  DON'T COUNT TO THREE!  TOUCH MY BOOB INSTEAD!" -Wait so AJ stops Zeb from getting the win...and then just stands there while RR gets the pin? -That was seriously wildly entertaining.  A healthy dose of Big E beating the snot out of RR and Zeb, plenty of funny (Coulter collapsing and claiming his knee went out leading to RR attacking Big E with the bucket totally made me lol so hard), a particularly fun, enjoyable sequence where each of the three wrestlers intervened on behalf of their representatives in the match leading to a perfectly logical reason to have Big E out o
Read more 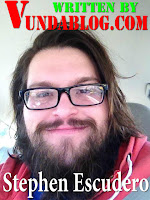 I love watching Walt Flanagan Draw I hope this web-series never stops. I need him to draw all the Doom Patrol, Metal Men, all the Challengers of the Unknown, all of Kirby's fourth world characters, and then I wanna see Walt draw the Marvel Universe. Please keep this series going smod co crew. This week Walt draws two more members of the Dark Knight Detective's rogues gallery: The Riddler and Clayface . Walt's take on the Riddler has the 60's Batman vibe. I think that series captured the Riddler most accurately of all the series villains. His green and purple design is classic and parroted by other comic book classics such as the Green Goblin and the Incredible Hulk . I like to have some orange in the suit since I grew up watching Jim Carrey riddle it up in Batman Forever . I think one of the most believable and cool designs for the Riddler was from The Batman cartoon that in the 2000's. He looks like Marilyn Manson and is a bomber who has riddle
Post a Comment
Read more

-Our show opens with Hogan claiming that he and Sting "almost came to blows" last week.  I guess if you widen the definition of "almost coming to blows" to include "having a baseball bat pointed at your throat" then yeah, they totally "almost came to blows." Hats off to you, "Heel Turn" sign guy.  I'm with you. -So last week Sting and Hogan "almost came to blows" and then this week Hogan apologizes to Sting and kisses his feet and everything is peachy again. -Hogan says a title shot isn't going to be handed to Sting nor is it going to be handed to Matt Morgan.  What IS going to be handed to both men is a match tonight to decide who gets a title shot.  This is why TNA can't have nice things. -Not only that but Sabin has finally returned after 11 months and he's in a match with a shot at the X title on the line with Xema Ion who just lost an X title match and Sonjay "Best Wrestler Ever to Go Abso
4 comments
Read more
More posts