Disney's newest film, Wreck-It Ralph is awesome. Disney has released these sweet viral videos to promote the movie and it is my extrem pleasure to share them with you. The first one is for Ralph's own game Fix-It Felix Jr. The game is similar to Donkey Kong although it also vaguely reminds me of Dig-Dug for the graphics and the fact you have to physically tap to fix the windows, the way you had to tap with Dig Dug to inflate monsters too death. I have been playing this game on my phone everytime I feel nostalgic for the film.
You can play the games made up for the movie here Fix-it Felix Jr., Hero's Duty, and Sugar Rush. The second viral commercial is for the racing game Sugar Rush. Which is sort of like Candy Land, meets Mario Cart(the title recalls san fransisco rush). The character design work is pure genius. The gameplay and names and concepts for the games are better than most new games coming out which feel like a repetitive stream of dudes in masks with guns. Sugar Rush was released in 1997 in the film's universe, and Fix-it Felix Jr. is from 1982.

The movie doesn't address the idea of console gaming versus arcade gaming but that6 is fertile ground for sequels as weel as online gaming. The film was my birthday movie this year and it was the perfect treat to my year. Last year it was Harold and Kumar 3(debatably the best of the trilogy). This is the viral commercial for Hero's Duty soon, which feels totally like a Halo ripoff in an arcade game, that the game play would be more like a TimeCrisis style shooter or House of the Dead. I hope Wreck-it Ralph get's a sequel beacuse the films universe is fertile ground for  future movies. Because it is our own videogame universe and this is a great non-chalant way to use and deal with it in a fun way on screen.
Here are some pics of me and Danielle meeting the films stars at Hollywood Studios at Walt Disney World Orlando. 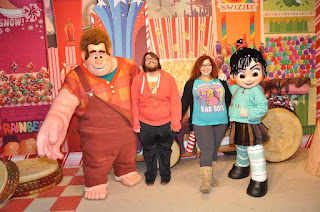 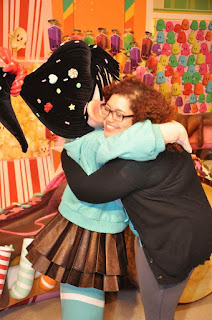 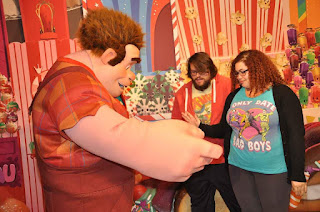 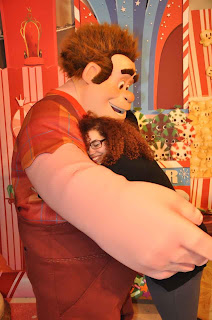 It's the best Pixar movie Pixar never made. The best part of it was the "glitch" character of Penelope von Schweetz. It reminds me of an old, cheesy, but totally true piece of advice: if you want to get the audience on your character's side, start with the saddest thing you can possibly think of. I can't think of anything sadder than a girl that desperately wants to be a racer but is a "mistake" nobody wants around.

Fastest turnover from annoying to sad in animation since the dog-creature from Don Bluth's "The Black Cauldron." (If you've seen that movie, you know what I mean.)