By Vundablog May 20, 2014
Time for a comicbook review of an unusual comic for me. Every once in a while at the comic shop, I may feel particularly random. Something odd may call to me from the shelves. This comic is one such oddity. Garfield's Pet Force 2014 Special jam-packed with two epic Garfield's Pet Force stories. 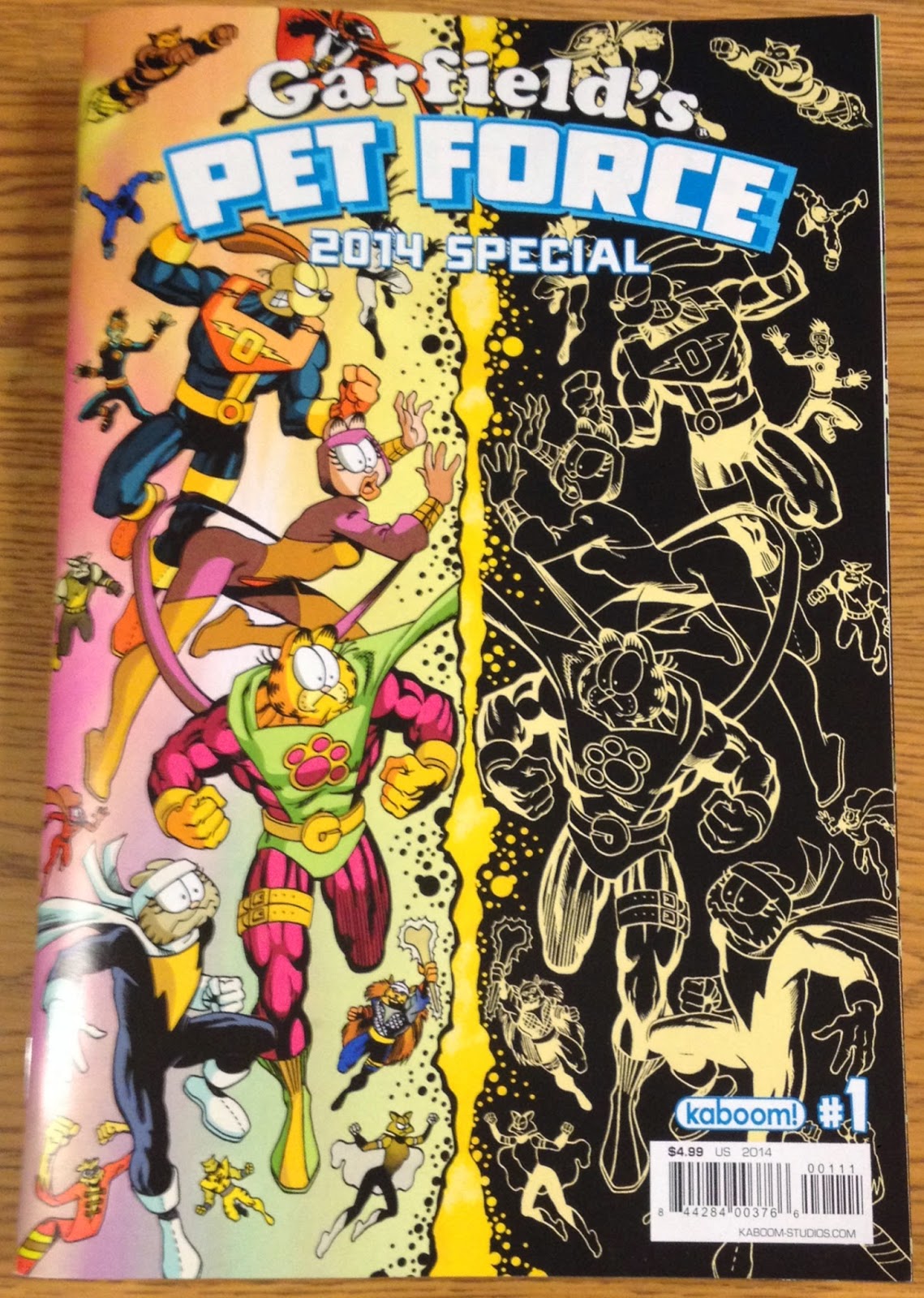 What is Garfield's Pet Force? I had no idea. I'm familiar with the concept of Oddie and Garfield and watched the cartoon a few times as a kid. I wouldn't consider myself a Garfield fan in the slightest. This comic may have changed my mind on the lasagna loving cat, though. Garfield's Petforce is Garfield as a superhero named Garzooka. Garzooka leads the Pet Force which is made up of his cartoon friends who have their own superpowers and dorky names. The stories are written by Scott Nickel. The first one is called "Cat-astrophe in the Cosmos" with pencils by Gary Barker and George Lane the third, inks were done by Mark and Stephanie Heike. 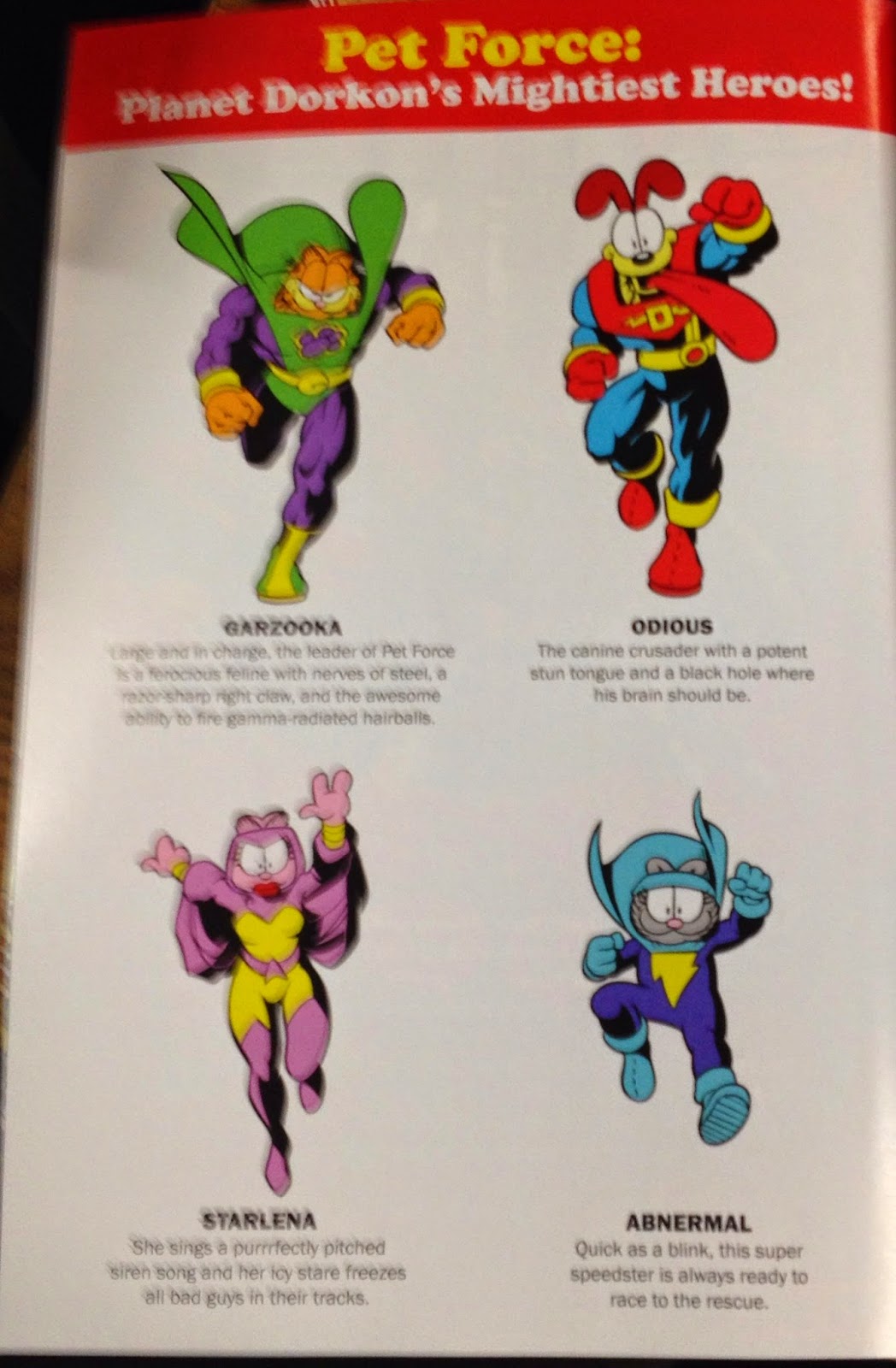 The story starts with Garzooka working out his massive biceps when the Onlooker appears. The Onlooker is a delicious spoof of Marvel comics the Watcher. His design is also reminiscent of Jack Kirby designs like Galactus. The Onlooker explains to Garzooka tat he's about to be flung into a Crisis on Infinite Earths style event. 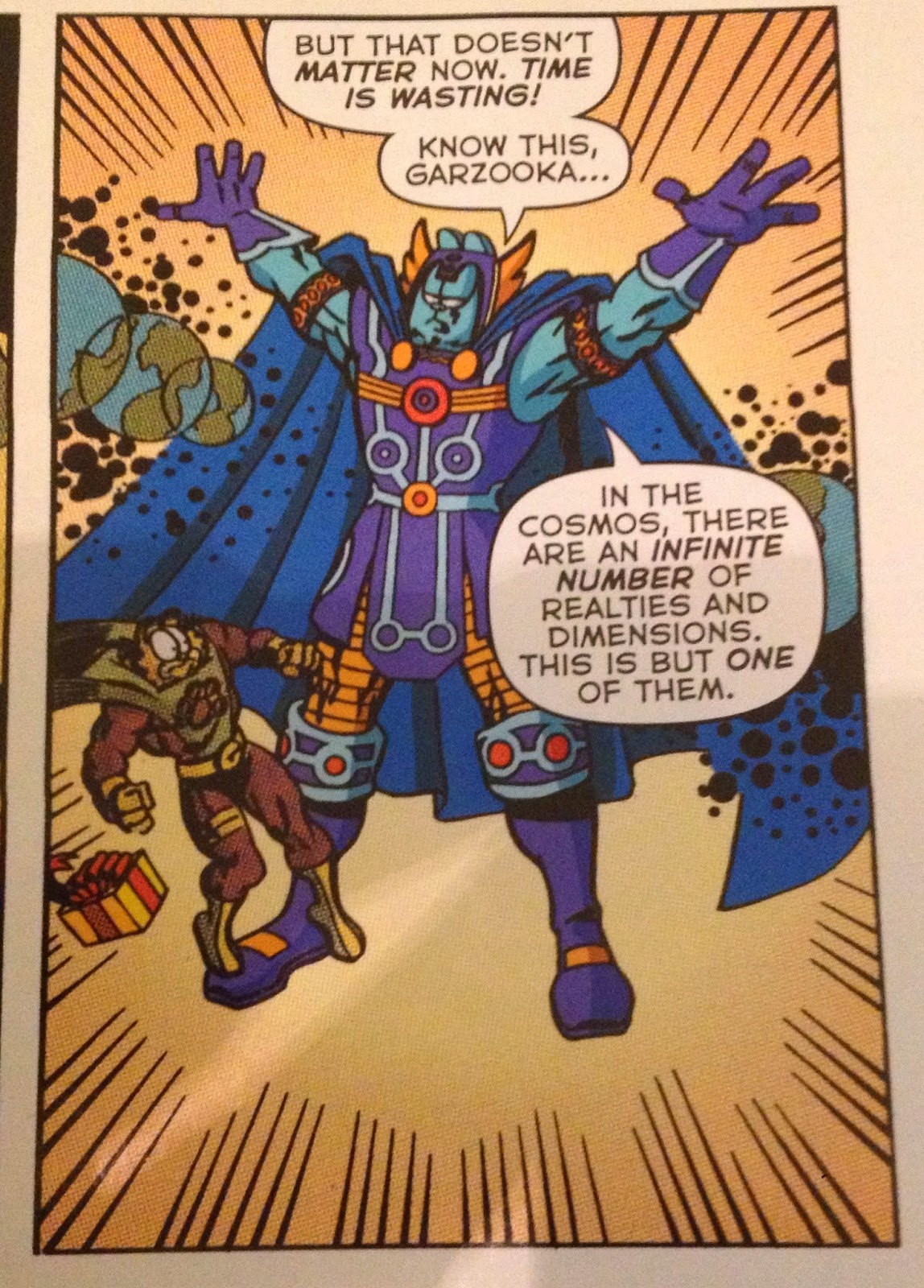 Garzooka learns of his doppelgangers on other worlds, spoofing universes like the Watchmen, the Dark Knight Returns, the Walking Dead and more. The Onlooker info dumps on Garzooka for two glorious pages and then we are taken to our b-plot. Our b-plot involves Vetvix, an evil Veterinarian, who is out to destroy the Pet Force. Vetvix uses a telepathic headband to break into a maximum security prison. She breaks out the evil Space Pie-Rat and sneaks off with six other mystery prisoners concealed psychically as a girl scout troop. 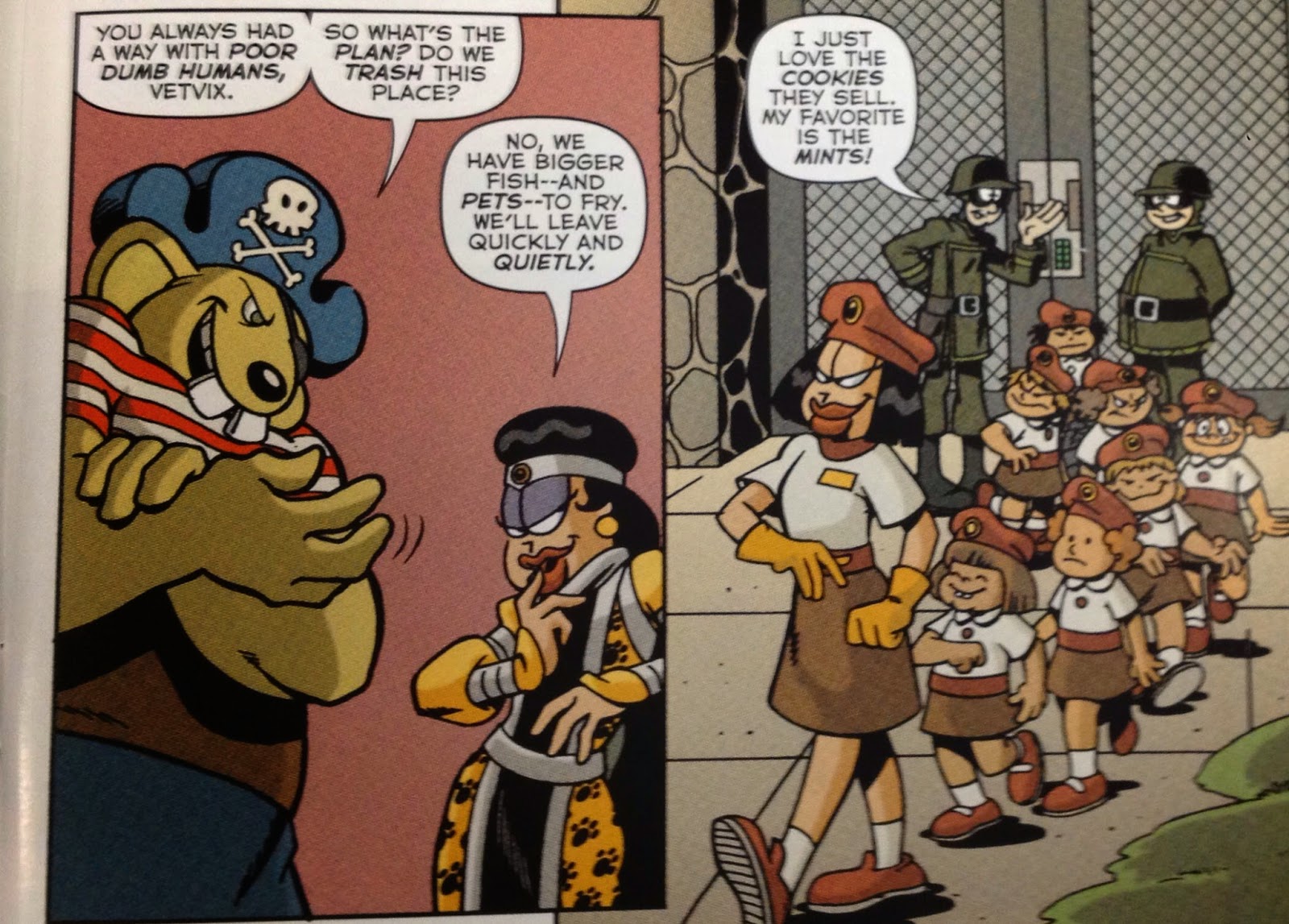 As soon as the girl scout troop is safely away from the prison they take their true forms and sound off in a villainous roll-call. There is Vetvix and Space Pie-Rat which I already mentioned. There is also K-Niner Dog of Doom who looks like a vicious attack dog. Lethal Lizard Dragon who fills the reptile quota. Bullhorn a loud goofy, overzelous bulldog with a big mouth. Dark Poodle to have a female pet member of the squad. The Mighty Thunderdog who appears to be a dog version of Thor, and last but not least Spayed. Spayed is as close as the Garfield universe can get to Spawn. These eight dastardly fiends team up to become the Evil Eight. 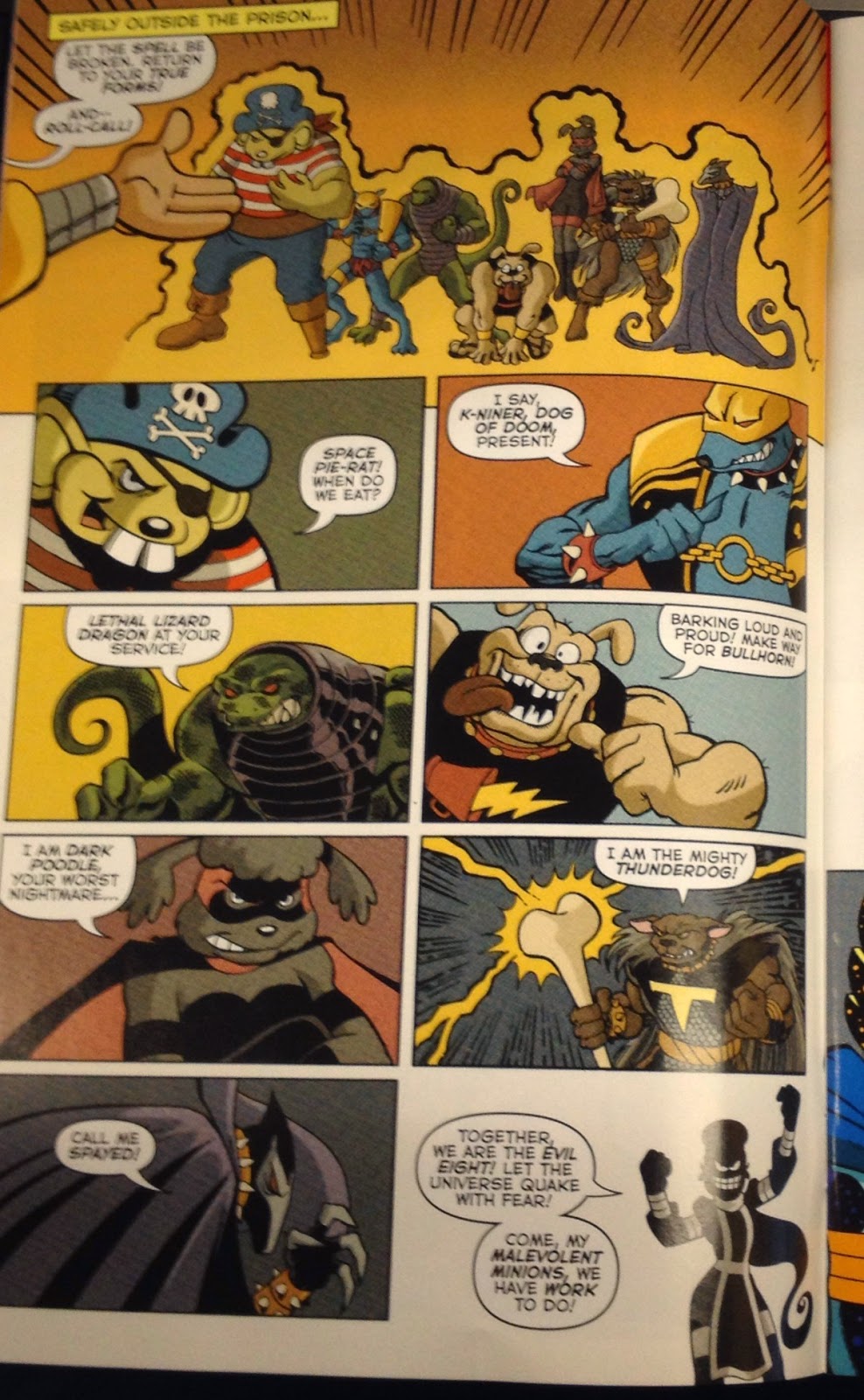 Meanwhille Garzooka is doing the reading the Onlooker asked him to when heroes from other universes start spilling into ours. Garzooka finds the differences strange as in some universe's Oddie can actually speak. The coming together of heroes is cut short as the Evil Eight shows up standing on Garzooka's front door. As can be expected the two groups face off and violence ensues. 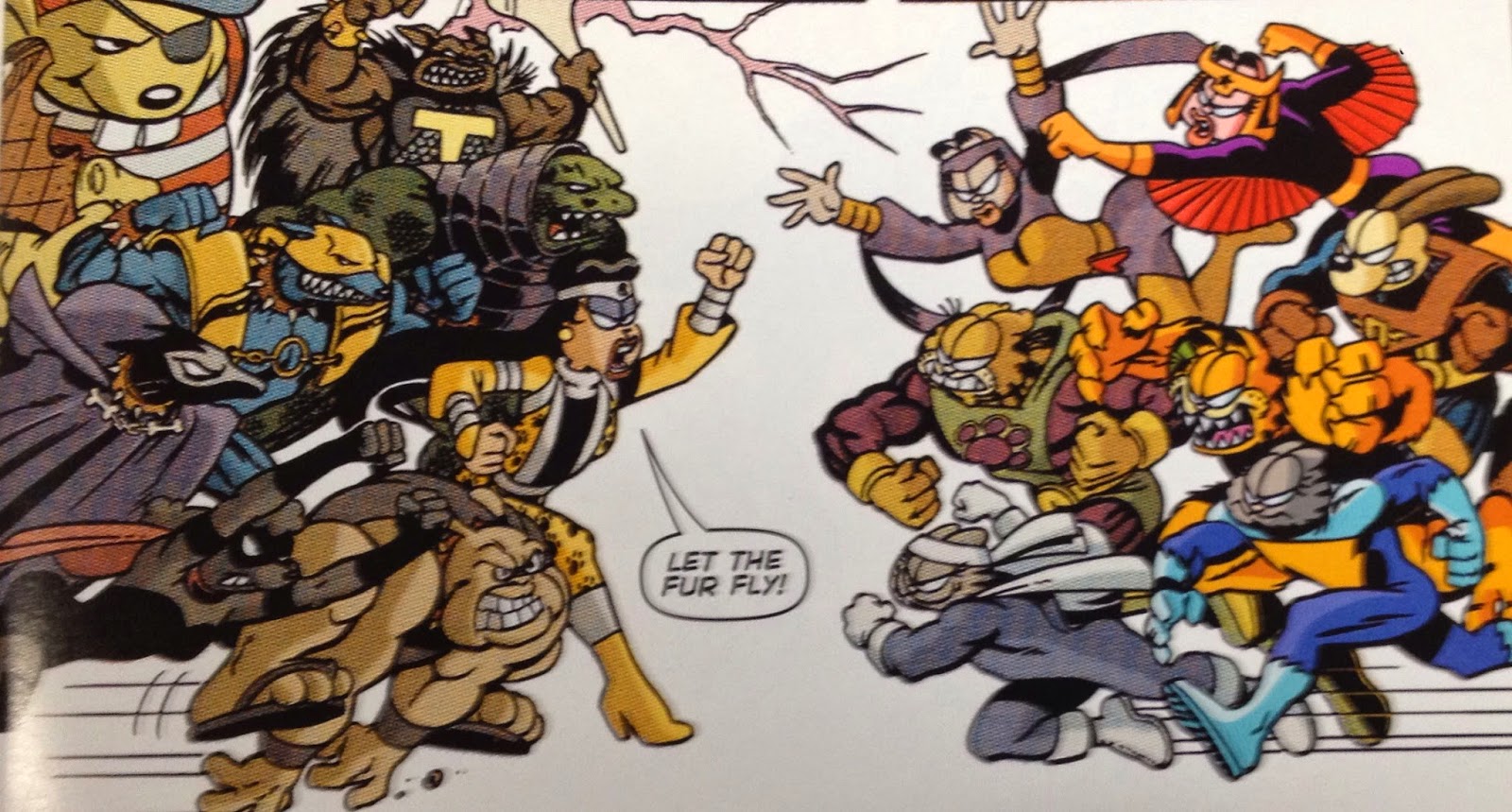 The comic continues with the fight between Pet Force and the Evil Eight. The universe gets righted in the process duplicates are erased, world's combine, and the Evil Eight are sent to a world of circus clowns. Some of the heroes end up with new powers and the Pet Force gets a new member in the Compooky a teddy bear computer that flies. The second story is just as well done and has another villain team for Pet Force to face in the Fearsome Four. I greatly enjoyed Garfield's Pet Force 2014 special. I was not expecting so much creativity to come from a Garfield comic. Jim Davis has put his creation in good hands. The art is superb and always looks on model. The stories are strong, engaging, and easy to read. I'd highly recommend this to any one whose going to come at this with low expectations and is ready to be pleasantly surprised.