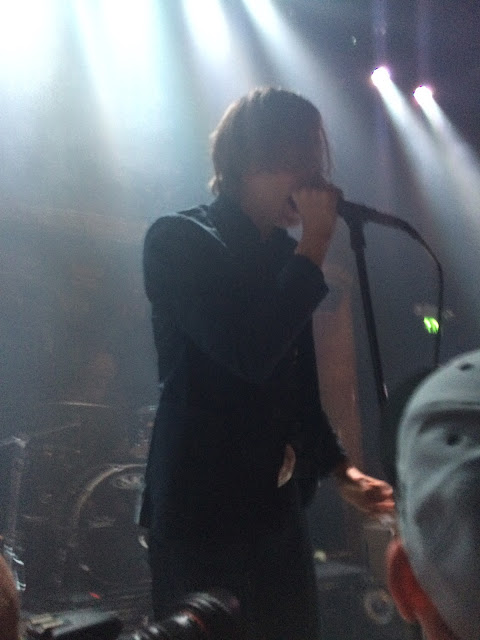 OK...so...I've been a fan of Refused since I first heard "The Shape of Punk to Come" on the last day of school in 2002 at my friend Matt's house. By that time, they were already broken up and I was more than a little heartbroken that I'd never get to see them live. In fact, for one of my assignments in Creative Writing my senior year, I wrote a fan fiction about seeing Refused live. When they reunited in 2012, I was excited, but also knew they'd probably never play anywhere near Miami because they NEVER PLAY ANYWHERE NEAR MIAMI.

Well...now I live in Berkeley! And, hey, whaddya know, Refused decided to go on tour this summer and the Great American Music Hall in San Francisco (which has famously hosted the Grateful Dead in the past and holds only a few hundred people) was one of the first dates on the tour. I pounced on a ticket the exact minute that they went on sale. I was not going to miss an opportunity like this.

The first band up was a local post-punk group called Wax Idols. They were decent enough, not really my style but good enough at what they do that I actually found myself getting into it. After them was a pretty rad hardcore pop punk type band called White Lung that I was a little more into. Also gotta give some props to Refused for having two female-fronted bands with majority female band members open their show, which was really cool to see.

I got my spot nice and close as the roadies were setting up for Refused and the energy that started rising in the venue was palpable. A lot of people had been waiting a long time for this. When the lights finally came down, the crowd erupted. People began moving around and pushing and shoving before the band even started. When they rocketed into "Elektra," the crowd exploded. I had been fairly underwhelmed by the first single from the band's first new album in 17 years and didn't expect much of a reaction to it but it really came alive when they performed it and the energy levels of both the band and the crowd were through the roof. 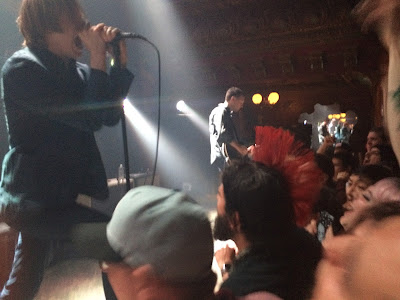 Then they started with the stuff we REALLY came to see...next up: the danceable title track off of "The Shape of Punk to Come" followed by the short burst of "Refused Party Program." As expected, chaos ensued as the whole crowd pushed its way forward to scream "REFUSED PARTY PROGRAM" in Dennis's face. That was followed by the old classic, "Rather Be Dead" off of "Songs to Fan the Flames of Discontent," which got the mosh pit worked up into quite a frenzy before going back to the dancey stuff with "Summer Holidays v. Punk Routine."

The next song in the set was a new song called "Françafrique" which continued the dancey vibe from the previous song. I previewed this song on YouTube before the show and really didn't like at all. However, even that song performed live was a lot of fun and I actually found myself almost enjoying it. Next they barreled into "The Deadly Rhythm," one of my personal favorites, and the intensity got ramped up again. One of the coolest moments of the show was when they replaced the little jazzy interlude with a tease of Slayer's "Raining Blood." As much as I love that little jazzy interlude and as cool as it would be to hear them do it live, it's difficult to translate and the energy created by any band dropping one of the greatest guitar riffs of all time into their set is amazing.

Next was yet another new song called "Dawkins Christ." This was the only new song they played that I hadn't heard previously and it was really f*cking good. I was legitimately impressed and have been trying to find a recording of it since that night. Then from the brand new, they went back to the particularly old with "Coup d'Etat," another one from "Songs to Fan the Flames of Discontent." Dennis prefaced this song with something about evolution and how he feels like it's time for a revolution, which is fitting, of course. 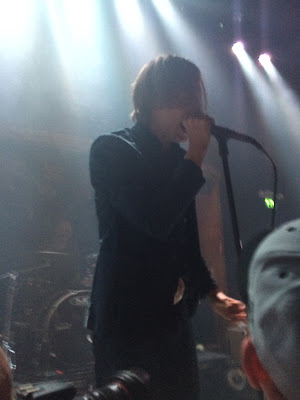 After that, Dennis told a really compelling story about how after "The Shape of Punk to Come" came out and they toured the States, they didn't really know what to think of themselves as a band, which is around the time they broke up. They got back together in 2012 and played Coachella but he said it wasn't really that good because it was this big thing and they were kinda nervous and apprehensive. They didn't know they were truly back until they played an amazing show in San Francisco and he wanted them to know that they have a special place in their heart for that and dedicated the next song to them: "Refused Are Fucking Dead."

The crowd was intense for this one, even though it's a little more on the dancey side, but it was a lot of fun and the big climax at the end had people piling on to scream along: "A NAIVE YOUNG SECRET FOR THE NEW ROMANTICS. WE EXPRESS OURSELVES IN LOUD AND FASHIONABLE WAYS." The energy continued to rise for the fan favorite "Liberation Frequency," which worked the pit and the front rows into a frenzy of pile-ons and stage-dives as they all screamed "WHAT FREQUENCY ARE YOU GETTING? IS IT NOISE OR SWEET, SWEET MUSIC? ON WHAT FREQUENCY WILL LIBERATION BE? WHAT FREQUENCY WILL LIBERATION BE?" 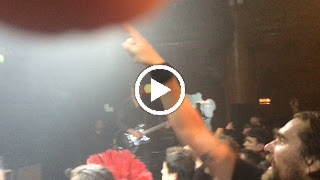 All that energy built into an EPIC closer--a song I've dreamed of seeing Refused close with--"Tannhauser." They didn't play "Derive" for obvious reasons and I'm glad they didn't. They also didn't do the violin solo at the beginning, also for somewhat obvious reasons, I guess. Would have been super cool, though, right? It still was, though.

Thankfully, the band didn't leave for too long before coming back for their encore, which makes me happy. I feel like, in some important way, the amount of time a band/artist waits before coming back for an encore is pretty much directly related to the size of their ego. But anyway, the point is, this is quite possibly one of the top 10 encores I've ever seen. Not because they did anything particularly special...because they played fucking "New Noise" and "Worms of the Senses/Faculties of the Skull"!!!

Holy mother of GOD, you guys. Great American Music Hall went FUCKING APESHIT. I probably don't have to describe this if you've ever heard either of these songs but in case you haven't: it was pure chaos. Bodies flying everywhere. Every voice screaming every word like this was their last night of their lives. Jumping up and down, flailing limbs, gnashing bones and muscle and flesh against one another. This was what many of us had waited ten, fifteen, or more years for. This was total catharsis.

Refused Are (Not) Fucking Dead.

Elektra
The Shape of Punk to Come
Refused Party Program
Rather Be Dead
Summer Holidays vs. Punk Routine
Françafrique
The Deadly Rhythm (with a tease of Raining Blood)
Dawkins Christ
Coup d'Etat
Refused Are Fucking Dead (prefaced by a story about how their 2012 show in SF proved to them they were back and gave them the confidence to move forward)
Liberation Frequency
Tannhauser (no Derive)
--
New Noise
Worms of the Sense/Faculties of the Skull