I have to admit, I had relatively low expectations for this installment of NXT TakeOver. The main event seemed like it would be decent but nothing to write home about. The undercard seemed like it had some potential but not a lot. Maybe that's why I think this might have been the best TakeOver yet--or at least the best since TakeOver Dallas. It's amazing what lowered expectations can do for your enjoyment of a thing. Maybe THAT'S why Raw is so consistently terrible and seemingly doing it entirely on purpose. At least that would be a better explanation than "no, actually they just think this is good writing." Anyway...on with the show... 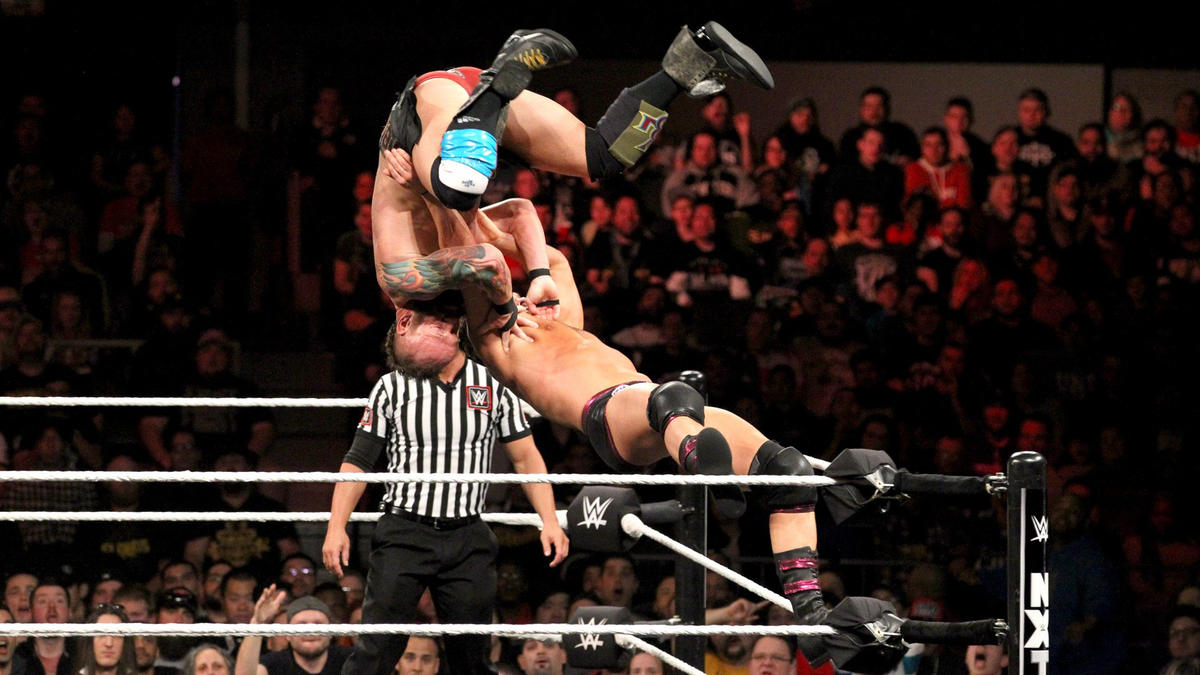 This was such a perfect example of how you can put together a GREAT match with relatively simplistic wrestling. There's really nothing complex going on here, just a compelling story being told with evocative visual imagery and great chemistry between the people involved. You don't need a bunch of chain submissions or complex reversals or crazy moves or flips or any of that stuff to tell an interesting story that people will be highly invested in. This match is basically a bunch of punches and kicks and clotheslines and Irish whips and suplexes and outside interference pieced together beautifully and the crowd is eating it up.

My only complaint is that this really, really needed to be the time to shit or get off the pot with the Tye Dillinger story. We've all been so tired of Tye constantly losing at TakeOvers for so long that, at this point, we're tired of being tired of it. Now you're structuring his entire narrative around him openly wondering if he has what it takes to be in NXT and then finding the confidence to believe that he does still belong...and...he loses AGAIN? I know you want to put over SAni+Y and I know he only lost because they interfered but moral victories are not good enough for Tye at this point. He is massively over with the NXT crowd and it's long past time to pull the trigger on his redemption story.

I was looking forward to seeing what these guys could do together but I also, admittedly, didn't really have any particularly strong feelings about either of them. Which is probably what made this the most surprising match of the night for me. This match was excellent and the main reason it was so good is that Almas and Strong have amazing chemistry together. Like it really felt like these guys were made to wrestle each other. Their reversals and their positioning and their timing was so on point. Really, really impressive stuff.

I probably had higher hopes for this match than any of the others and it definitely did not disappoint. DIY's understanding of the mechanics and psychology of tag team wrestling may be second only to The Revival. Plus the story they told here was great. DIY just trying with all their might to hammer and chisel away at these two giant boulders. They keep getting plastered for their trouble but they are two of the most tenacious wrestlers on the planet so they just keep coming and coming and coming, bludgeoning away at the immovable objects until they move. Ciampa coming in off the hot tag and just throwing all of his strength into bludgeoning the hell out of both Akam and Rezar, culminating with him hitting two MONSTER German suplexes on them was wonderful. That double spear through the ropes was sick. I couldn't believe when Ciampa kicked out of that suplex/neckbreaker/powerbomb combo. The callback to the finish of DIY/Revival with Rezar picking up Gargano and slamming him onto Ciampa (pictured above) was beautiful. Finally, the finish of DIY going for the stereo knee/kick and getting caught in the Super Collider and then getting Last Chapter'd for the win was pure poetry. NXT tag team wrestling has truly become the gold standard of tag team wrestling in the industry today and possibly even in wrestling history.

I also actually like AoP taking the titles here because although it tragically cuts DIY's title run very short, I think it's more important to put over AoP as unstoppable monsters and DIY as underdogs and having DIY beat AoP on their first try doesn't feel like good storytelling. I do hope DIY gets their titles back at TakeOver Orlando, though.

Completely out of the blue, Rollins wises up and decides to crash TakeOver and call Triple H out because NXT is Triple H's baby and he KNOWS he'll be there. Trips saunters out to the entrance way, teasing a confrontation, and then calls for security to take Rollins away. It's amazing how just having Rollins show up on NXT (where, as he mentions, it all began for him) breathes life into his character and how a simple stare-down in front of a hot crowd can take a feud that hasn't really gained much steam yet due to the absence of one of the two people in it and make it pop. Great stuff.

This is the match I probably had the lowest expectations for and was probably the weakest match of the night which is not a slight against it at all. I loved the story they told with Peyton and Billie being scared of Asuka and Nikki at the beginning and then picking their spots to gang up and sneak attack them. It eventually works on Nikki and they get a great spot (pictured above) where they double suplex her through a table. It almost seems to maybe work on Asuka until Asuka goes all psycho killer and just murders them both with kicks to the head. I also really appreciated the small detail that when one of them (I honestly can't remember if it was Peyton or Billie because whatever) went for a pin, the other one tried to help with the pin, seemingly answering the question, at least in that moment, of whether or not they were willing to work together or whether they truly didn't care which of them won the title. I feel like that could be important later. Also, I really can't wait to see Asuka and Nikki one-on-one and this match (and the entire storyline around it) did a good job of teasing that. 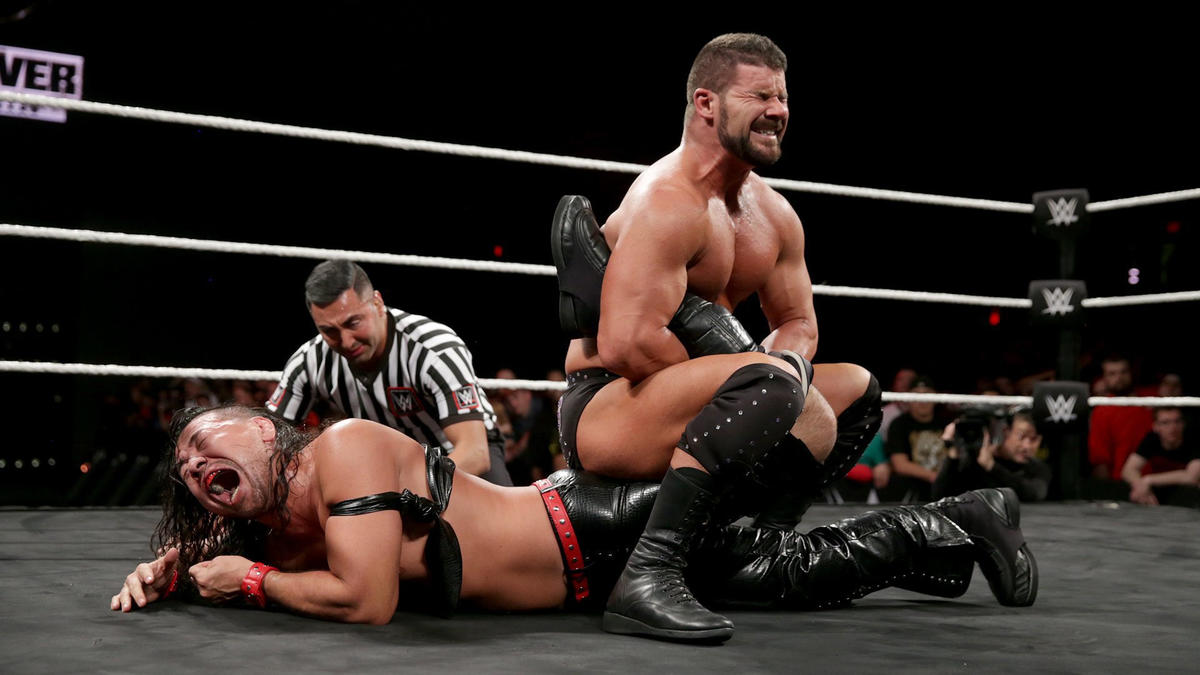 I honestly didn't expect much out of this match. Roode seemed like the only logical next contender to the title but he also didn't seem like someone who could, in any way, have the slightest prayer of defeating Shinsuke. The beginning of the match plays out like you'd expect, with Shinsuke mostly dominating. Until Roode pushes Shinsuke off the top rope to the floor and injures his neck. That's the one advantage Roode has on Shinsuke: his veteran wiles. He is the king of dirty tricks and has great ring awareness and wrestling IQ and when he finds or creates a weakness, he relentlessly exploits it. That's the story of this match. Shinsuke is clearly the better wrestler but Roode is the smarter wrestler. He relentlessly attacks Shinsuke's injured neck--which Shinsuke sells better than anything else in any previous NXT match of his. He plays dead the first time Shinsuke hypes up for the Kinshasa, causing him to let his guard down and almost get pinned. He rolls out of the ring when Shinsuke is about to go for the flying knee (the setup for the Kinshasa) and goes to the apron. He knows Shinsuke is a wild animal who will just go for the move on the apron anyway, which causes Shinsuke to injure his knee. Shinsuke hits the Kinshasa but it hurts his knee so bad that he can't go for the cover. The ref almost stops the match due to Shinsuke's injury--which Shinsuke, again, sells a million times better than anything in any of his NXT matches--but Shinsuke is 110% adrenaline and instinct so he insists on continuing and that's when Roode pounces once again, relentlessly attacking the knee and hitting two devastating Glorious DDTs for the win.

There are few things I love more in wrestling than when it puts maximum effort into getting me to buy into a story being told in the ring that I had absolutely no interest in prior to the match. It's why the main event of WrestleMania XXXI was one of my favorite matches ever--because I vehemently did NOT want Roman Reigns to win that match and yet the story they told was SO good that by the end of that match, I actually did want Roman to win. That's Bobby Roode v. Shinsuke Nakamura. There was no part of my brain that was prepared to believe that Roode was anywhere NEAR Shinsuke's league. Shinsuke is a force of nature. A tornado of bludgeoning strikes that would destroy any mortal man. He even destroyed Samoa freaking Joe three out of four times. Roode is a great character but merely an above average wrestler (both kayfabe and IRL). But what he is is smart, experienced, conniving, and relentless. And he outsmarted Shinsuke at every turn, expertly using Shinsuke's animalistic momentum against him again and again to create chinks in his armor like Smaug, and then rabidly pouncing on those weaknesses and exploiting them until they finally became Shinsuke's downfall. That is some seriously amazing storytelling. By FAR Roode's best effort yet and may have honestly been Shinsuke Nakamura's best match so far in NXT--particularly because his selling and in-ring storytelling in this match was night and day better than every other match he's had in NXT. Phenomenal work by everyone involved.

One request: Can we start Tye Dillinger's Sami Zayn redemption story that ends with him taking the title from Roode now? That is going to be LIT.

It's finally here, loyal followers: Halloween time is upon us! And what better way to spend our Quarantine-o-ween than by watching as many spooky movies in the month of October as possible! But we here at the Vundacast will do you one better because throughout the month of October, not only will we be watching as many spooky movies as possible but we will also be podcasting, writing, and live-tweeting about as many of those films as we can! We have access to all the best streaming platforms--Netflix, Hulu, HBO Max, Shudder, Criterion Channel, even YouTubeTV--and have compiled a sufficiently ridiculous watchlist of Halloween fare. We can't wait to share our thoughts with you about all our favorite Halloween classics as well as some new ones and some that are new to us. Stay tuned here on our website as well as on our official Twitter, @Vundacast , for tons of awesome Halloween movie content! For now, check out some choice selections from our list to whet your appetite for what&#
Read more