By D-Rock February 07, 2017
For the first time in three and a half years, Vundablog was LIVE in attendance at Monday Night Raw! OK, admittedly, it's kinda hard to be THAT excited about going to a Monday Night Raw considering the shitshow it's been for the last several weeks/months but hey, it's live wrestling! This show had a lot of potential based on the card and while it didn't quite live up to all that potential, it was still a pretty damn good show. Let's get to it...


The show starts with Stephanie McMahon and Mick Foley introducing CORPORATE SAMOA JOE. I don't know why I love awesome heel wrestlers selling out to the Authority and then showing up the next week in snappy suits but GOD I love that thing. Joe is ROCKING that suit, too. He and Kevin Owens look so good in suits. Foley is less than enthusiastic about introducing him and when Steph grills him about it he says he's been a Samoa Joe fan for a long time but wasn't a fan of how he made his debut. Joe cuts a typically great Samoa Joe promo explaining his history and his character and his motivations clearly. He says it took him 18 years to get here and Foley didn't help him out once during that time (which is especially great considering they were in TNA together for a couple years there) but finally Triple H gave him a chance and that's why his loyalty lies with him. He says he's putting everyone in the locker room on notice and he's going to beat up all your heroes and choke them out and wake them up just to beat them up again. Whatever they do to ruin Samoa Joe somehow, the character itself would seem to be incorruptible at the very least. He could easily be the best monster heel this side of Brock Lesnar (if you can really call Lesnar a heel) if they don't screw this up. 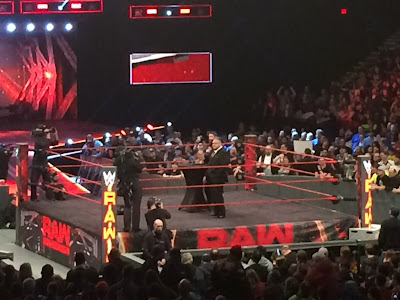 Anyway he gets interrupted by the other Samoan named Joe who cuts an incredibly Roman Reigns promo about how he's the "baddest dude in WWE" which means Joe's in "his yard" because he's the "Big Dog" or something. Whatever. The point is that it leads to Foley booking Samoa Joe v. Roman Reigns RIGHT HERE TONIGHT. Which naturally makes Samoa Joe marks on Twitter flip their shit.

I...don't really want to talk about this. I don't know why WWE refuses to acknowledge the history between these two or why they think the only way to build a rivalry is to have one of the people in it distract the other during a match and make them lose or WHY THE CONSTANT DISTRACTION FINISHES IN WOMEN'S MATCHES. Sigh. #DestinedToDoThisForever

Hey look, it's Braun Strowman cosplaying Six Months Ago Braun Strowman. This goes exactly how literally everyone expected. It ultimately leads to Strowman finding Foley in the back and demanding "competition" and Foley's like "OK, I didn't want to do this but if you REALLY want to job to Roman Reigns, I can't stop you." I feel like this is basically going to end with the Lesnar/Reigns match from WrestleMania 31 with Strowman in Lesnar's place which could be really good, especially if Reigns loses to Strowman first at Fastlane and then beats him at WrestleMania.

I've already complained enough about how massively WWE has bumbled the cruiserweights by making them wrestle the most boring, middle-of-the-road WWE match over and over instead of letting them do all the fun, exciting things that made the Cruiserweight Classic so exciting. So I'll just leave you with that tweet and move on. 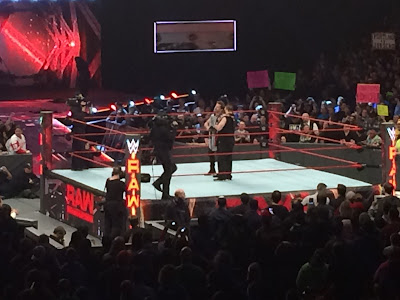 You know what sucks? Being in a room full of thousands of screaming people who are super excited about what's happening in front of them and being pretty much the ONLY person in the room who absolutely hates it.

First, let's just be clear that Jericho and Owens, as usual, were amazing throughout this episode. The highlight of this segment (maybe the entire show) for me, BY FAR, was this:

F*ck Tom Brady. And right then, at our most excellent moment together...

SPOILER ALERT: There's been a rumor making the rounds the last couple days that WWE was planning on having Owens face Goldberg at Fastlane and that the plan was for Owens to drop the Universal title to Goldberg and then, most likely, have Goldberg drop the title to Lesnar at WrestleMania. If this sounds like a stupid garbage idea, it's because it kinda is. However, I will say this: from what I've heard, the idea is that WWE wants to give the Universal title some prestige, which is fair. Finn Balor was the first Universal champ, holding the belt for a grand total of, like, what? 22 hours? Kevin Owens has been champ ever since and has been treated like a garbage mid-carder who can't win a match on his own and is the least important part of everything he's involved in pretty much the entire time. So, y'know, maybe there are better solutions to the problem (which YOU [WWE] created in the first place) than hot potatoing the belt to two part-timers.

Hell, if you want to put the title on Lesnar so badly, have HIM take it off Owens at Fastlane. At least then we get that Lesnar/Owens dream match instead of jobbing Owens out to Goldberg in like 43 seconds. I know you want to give the belt that extra rub of being around Goldberg's waist for a month--and honestly, setting aside my hatred of Goldberg for a second, it makes sense because he's easily the most over guy in WWE right now--but UGH. REALLY?! I'd so much rather see Lesnar walk into WrestleMania champion and successfully defend the title. And it would give him so much heel heat to deny everybody's favorite forty-nine-year-old the title. Then when Roman Reigns wins it from him at SummerSlam, people might actually be happy about that thing. Or, hell, maybe even stop forcing Roman down everyone's throats and have Finn take the belt off Lesnar. Or Sami Zayn pull off the miracle of all miracles. Or some combination of those three fighting each other. So many possibilities. (Honestly, though, I would love to see Reigns/Lesnar II with Reigns coming out on top. Their first match was one of my favorites of all time.)

Also I just want to give a shout-out to KO for saying that Goldberg/Lesnar would be a great undercard match for the biggest main event in WrestleMania history: Kevin Owens v. Chris Jericho, title v. title, best friend v. best friend. I actually can't wait for this next week:

But yeah, ultimately, this whole segment kinda made me feel like this: 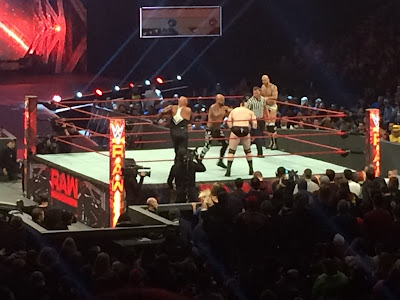 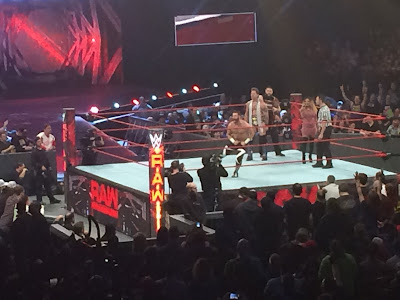 This was that stretch of the show where it starts to wear on you. Sami Zayn v. Chris Jericho for the US title was good but a little bit disappointing (and definitely not deserving of a "This Is Awesome" chant). Gallows and Anderson v. Sheamus and Cesaro was fun but ultimately obnoxious. New Day v. Shining Stars was...I mean...the Shining Stars were on Raw is all I can really say about that. That and poor New Day. Seems so long ago they were the longest reigning tag champs of all time and now they're wrestling the Shining Stars. And then there was the cruiserweight trainwreck. Beyond being several of WWE's most tired tropes rolled into one segment--1. "Everybody who's in [insert multiple participant match we're promoting] form a line at the entrance way for multiple participant promo segment," 2. "These people are all in [insert multiple participant match], let's put them in [insert different multiple participant match] to get people excited for [multiple participant match]," 3. "These people are all yelling at each other, let's put them in [insert multiple participant match]"--the match itself is BORING AS SHIT which goes back to my original complaints about the cruiserweights. Cuz man, if you think a one-on-one regular ass middle-of-the-road WWE match is boring, brace yourself for a regular ass middle-of-the-road WWE SIX MAN TAG match. WOOF. The crowd starts chanting "boring" like 0.1 seconds in because it's already conceptually the most boring thing ever and the match does nothing to assuage that boredom, especially two and a half hours into a three hour show that has Samoa Joe v. Roman Reigns coming up next. 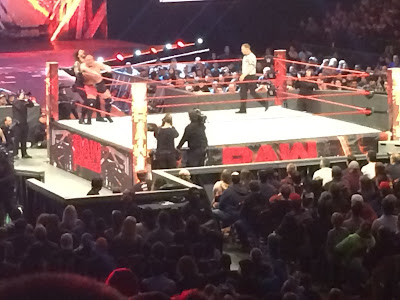 I don't know why but I was kinda expecting more out of this. Like something on the level of that Reigns/Rusev match they had right before SummerSlam that should have been the match they had AT SummerSlam. I mean it's Joe/Reigns for the first time. It's Joe's first match ever on WWE TV. The crowd was JACKED for this when it was announced and even summoned enough energy after like two hours and fifty minutes to create a big fight feel with the crowd highly polarized between the two. It was still good for what it was and one day they're gonna give these two some time to work and it's going to be a masterpiece but this just left me kinda let down. It makes sense from a booking standpoint not to give away a PPV quality match (even though WWE does this ALL THE TIME) but it's still a bummer if you paid money for a seat in the building to watch it. It was pretty great to see Strowman destroy Reigns, though.

I was surprised how many people left immediately when the main event was just wrapping up. I guess a lot of people don't really know about dark matches. But for those of us who know not to leave our seats until the PA announcers comes on and says "ALRIGHT PORTLAND THAT'S IT FOR MONDAY NIGHT RAW" we got a special little treat: BROCK LESNAR!!! He didn't do much, of course. Paul Heyman said Goldberg wasn't in the building so Brock was issuing an OPEN CHALLENGE. It's probably my own fault for actually thinking Brock would wrestle a full dark match and then letting my mind run away with the possibilities (Kevin Owens? SAMOA JOE? NAKAMURA?!?!) but I was pretty bummed out when the Big Show answered the challenge. It was pretty rad to watch Lesnar pick up the 500-pounder like a bag of potato chips and F-5 him into oblivion. I guess, in retrospect, I'm satisfied with that. Mostly. But man...those fantasy bookings...

Dani and Stephen have seen Avengers Endgame and every single Marvel Studios film in theaters and now they have things to say.

Support Smash.Miami and see how you can help and have fun! Throw us some Ko-fi money to support our efforts! Check out the hosts Star Wars The Force Awakens Wedding Proposal with the great band the Magic City Hippies.
Catch us on our Internet Radio home the Radioactive Underground RADIATE.FM Tweet the Show:  @Vundablog or @Vundacast Join us on Facebook visit our home Vundablog.com

The DC Universe App is out and Stephen and Mr. J peruse it's opening entree of content. Our dynamic duo also do a commentary track as they watch 1979's Legend of the Superheroes! We enjoy the late 70's shenanigans and critique our beloved DC for not having Steel.

and most importantly visit our home Vundablog.com