In Defense of Rob Zombie's Halloween 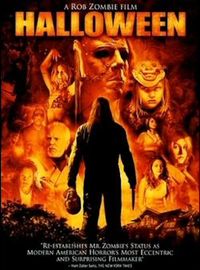 I know, okay? I know how everybody feels about remakes. Especially horror movie remakes. But it seems like there is no more unfairly maligned horror movie remake than Rob Zombie's Halloween. It's understandable. Halloween is a classic, groundbreaking film. It was the first horror movie I ever saw and one of the first R-rated movies I ever saw. I remember how much I loved the fact that it relied more on atmosphere and tension than blood and gore. I remember how much I loved the perfectly creepy soundtrack. I remember buying a Halloween mask and breathing heavily into it like Michael Myers for weeks. But what Rob Zombie did with this source material deserves a hell of a lot more respect than it gets and on this, the day that lends the movie its name, I'd like to lay out all the reasons why...

For starters, though I in no way do I endorse people relying on websites like Rotten Tomatoes to tell them what movies are good and bad--form your own opinions, please--it's interesting to note that Rob Zombie's Halloween received a 26% rating and, more interestingly, the critical consensus reads: "Rob Zombie doesn't bring many new ideas to the table in Halloween, making it another bloody disappointment for fans of the franchise." Not only is this patently false (which I'll get into in a bit) but it's also quite different from the complaints I've heard anecdotally from many fans--namely, that Rob Zombie's remake demystifies the character of Michael Myers, making him far less scary than John Carpenter's seemingly randomly violent Myers.

While I understand the argument for mystique making Myers scarier, I completely disagree. Zombie humanizes Myers in a way that, for me, makes him far more terrifying. This "perfect storm" of "interior and exterior factors gone violently wrong," as Dr. Sam Loomis describes Michael, could happen to anyone. Anyone can become a monster with the right combination of nature and nurture. It also forces the audience to empathize with Michael to some degree--maybe even see themselves or even their own children in Michael. An uncomfortable position to be in but an important one for anyone who hopes to confront the real evil that does exist in our world.

But Zombie goes even further than that--and this is the big, HUGE piece of his remake that I feel like way too many people miss. In the original Halloween, Michael simply randomly escapes somehow and goes back to his hometown for a murder spree. Zombie benefits greatly from hindsight and changes in canon between the original first and second Halloween films because it wasn't decided until the original Halloween II that Laurie Strode would actually be Laurie Myers, Michael's estranged sister. Zombie, quite brilliantly in my opinion, takes this information and uses it to give a completely different take on Michael Myers.

When Myers escapes from Smith's Grove in Zombie's remake, it's entirely premeditated. Dr. Loomis has just told Michael that he has to stop coming to see him after fifteen years of silence and Halloween is approaching so Michael picks his spot when he is being transferred to another facility to escape and find his way home. (I will never understand why the director's cut of the film replaces this scene with one where the scumbag security worker and his friend take a severely mentally unstable woman into Michael's room to rape her and antagonize him [FOR SOME REASON] into murdering them and escaping seemingly on a whim.)

But what happens when he gets there is what's really interesting. He murders and maims everyone in his path with the specific aim of finding his baby sister, armed with a picture of her that his mother brought him fifteen years prior. This picture serves as a brilliant catalyst to illustrate from a young age Michael's insane, violent protectiveness of his baby sister when a nurse has the audacity, upon seeing the photo, to remark "cute baby," prompting Michael to tear her throat to pieces with a fork (not sure why they're giving this kid a metal fork but whatever) and also in the scene at the end of his first vicious massacre where he goes to Laurie's room, picks her up, and says "Happy Halloween, Boo." As though he's just given her a great, big Halloween present.

What's really fascinating, though, is that when he finds Laurie, he doesn't kill her. He brings her to a weird room that seems to be under their old house--or at least there are no floors, just dirt. He then kneels down in front of her, takes the picture of him as a child holding her as a baby, hands it to her, takes off his mask, and slumps into a position of complete surrender, even dropping his knife. This is an incredible moment. There is still something human left in Michael. Perhaps even something resembling love. Yes, he's just been on a murderous rampage, killing Laurie's parents and one of her best friends and maiming and psychologically scarring another, but it seems, in this moment, that he's been doing all this either to protect her or to be reunited with her or both.

Of course, Laurie tries to use this to her advantage to stab him and get away but even as he chases her through the house, it's never entirely clear that he's trying to kill her. In fact, I think there's more of an argument to be made that he isn't than that he is. Regardless, I was stunned by this take on Michael Myers, especially when I went back and watched the original and discovered that none of this has any basis in the original film. Of course, how could it? Laurie being Michael's sister wasn't canon yet when the original was made. But Rob Zombie took that information and ran with it to create a truly unique take on one of the great movie villains of all time and I think he deserves some major kudos for that.
derrick mustelier