-Sting won't settle for the best.  He needed the best of the best.  So he called the 44-year-old.  To be fair, Angle is 10 years younger than Sting, which probably makes him an up-and-comer in the eyes of The Icon.
-So I'm assuming AJ Styles has been told by TNA Creative to avoid speaking at all costs.  So, for about the 74th time, AJ shows up to face someone who has called him out only to say and do nothing except a lot of brooding and then symbolically walk away.  Angle ain't having it, gets physical with AJ, leading to a brawl, which leads to Stung getting laid out by 3D for the first time ever (which I honestly enjoyed more than a little bit).  So now we still don't know who the third man on Stung's team is.  God help me if it's Hulk freaking Hogan.  (JO-SEPH-PARK!  JO-SEPH-PARK!  JO-SEPH-PARK!)  Meanwhile this AJ Styles storyline continues to go absolutely nowhere and take fucking forever to do it thanks in no small part to AJ's unique communication style... 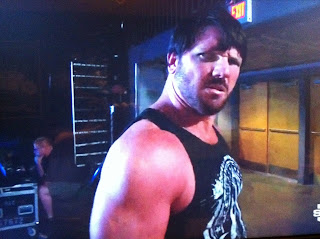 -I guess it's somewhat of a positive thing that I was actually disappointed by that Knockouts match.  At least they've created some expectation of good things in the ring.  Although I did enjoy the psychology of Tara being more interested in making out with Jessie than actually wrestling which led to Gail Kim assaulting her after the match.  Second week in a row ODB has had to pull her off of the Figure Four on the ring post--I'd love to see this lead to a Gail Kim/ODB feud.  Note to Velvet Sky: you're allowed to touch people when you clothesline them.  It's a shame she's such a mediocre wrestler because she has a great entrance theme.  I like her finisher too.


-Where can I pick up a case of "Skull with a Cowboy Hat" beer?  I think I found my drink.
-"Forget about Fortune...we could be Threetune!"  Oh, Kaz.  Let me love you.


-Oh shit, Bully's making D-Lo turn in his "colors" (black and...black...) and sit with the timekeeper to watch Doc wrestle Magnus.  If Doc loses, D-Lo's out of the club (ostensibly).  I wonder if D-Lo will try to interfere in the match.  I wonder if that interference will end up costing Doc the match.  Let's watch...
-First D-Lo tries to throw Magnus into the stairs and gets reversed out of his shoes, then he decides to interfere without actually looking at what the hell he's doing and--surprise, surprise--costs Doc the match.  Poor D-Lo just can't do anything right.  Now he's demoted to prospect for Aces & Eights--which apparently involves fetching them beer and ice and cleaning their bikes.  Bully also calls D-Lo a "bitch" for the second time tonight.  I guess that's why he thinks he should get him ice and beer and wash his bike--all clearly jobs for women (in addition to crying, apparently).


-Bad Influence and Dirty Heelz continue to make this show worth watching week in and week out.  (Although AA thrusting his crotch into Christy Hemme's face as punishment for saying the wrong names was truly awful.  TNA must have the worst HR department ever.  I was watching some old TNA the other day where Hemme was portrayed as a heel for being treated fucking disgustingly by the New Age Outlaws--who had decided to rename themselves Voodoo Kin Mafia for whatever reason--and having the audacity to get upset about it and hire "Damaja" and "Basham" to kick the shit out of them.)
-ANYWAY, the match itself was of a caliber rarely seen in TNA these days.  These guys have made looking like bumbling idiots into an art form.  The double eye rake leading to both blindly going to the wrong corner for the tag, getting decked, and then going to the center of the ring and tagging each other, thinking they had tagged their partner and taking themselves out of the ring was pure poetry in motion.  All four guys are so good at the mirror image stuff and of course they're all just damn good wrestlers and their talent was on full display in this one.  I wish these guys weren't wasting away in the tag division--four of the most talented guys in the company in ONE feud is a horribly inefficient use of talent.  TNA needs to stop trying to be WCW and just be TNA and this is a prime example.  Wasting heaps of talent while putting over a bunch of washed up dinosaurs.  Hopefully at least the non-ending of this match leads to a triple threat tag title match at Slammiversary.  That would actually be almost enough to get me to pay money for this otherwise worthless PPV.  Well, no, not really...

-This was a weird segment.  Kenny King comes out and does the cocky heel thing for a while and then introduces Chris Sabin with the utmost respect and asks him very nicely to tell his story.  Sabin then proceeds to tell King that he has NO IDEA what it's like to dedicate your life to something and have it taken away but he also has NO IDEA the kind of dedication it takes to come back from that.  He then tells King that he won't be champion much longer.  It's hard to really fault King for getting peeved and telling him he'll never win the belt as long as King is alive.  So, obviously, Sabin decides the best course of action is to clock him because wrestling.  That segment actually made me like Kenny King a lot more than I did before.

-Mike Knox is the brains of the operation.  He's a deep thinker.  I just want to hug him and never let go.
-Bully Ray says to tell D-Lo to keep the beer cold and the bikes cleaned because tonight they're going out looking for women.  Apparently they're all hiding and these guys are gonna go find them.

-So Hogan claimed earlier in the show that he got a call from someone who, if he is who he says he is, Angle and Sting will be able to just sit back and watch this guy destroy Aces & Eights.  As Angle's music hits, Hogan gets a call from this person and tells them it's now or never.  I can't say I'm brimming with confidence considering the quality of Hogan's decision-making skills lately.
-Aces & Eights come out to the ring and the first thing Bully Ray does is threaten So Cal Val and Christy Hemme.  I know TNA is based in Tennessee but the attitudes toward women displayed by the TNA talent would make a neanderthal cringe.
-Sting is so old that his make-up starts coming off before anyone even touches him.  Let's just all thank our lucky stars that he wears a shirt when he wrestles now.


-The camera cuts to backstage footage of Aces & Eights LAID OUT.  OK, you got me, I'm legitimately intrigued to see who this mystery man is.  My money is on Abyss.  It obviously has to be some kind of monster if he took out that many huge guys like that.  Oh God.  What if it's like...Ultimate Warrior or something?  Now I'm scared.
-THE MONSTER RETURNS!  THE MONSTER RETURNS!  YES!  YES!  YES!
-So I was sort of right (I was hoping for Joseph Park but this is almost as good).  My only complaint is that if Abyss had used his old music, we probably would have gotten a huge pop instead of the slow, confused crowd reaction we got.  Although even when Abyss came out, the reaction was a little disappointing.  I popped super hard.  This is the problem with trying to be WCW--you alienate the fans who would have gone NUTS for the return of Abyss and trade them in for fans that don't know/don't care who he is.  Or maybe it's just that there's so much turnover in the fanbase that when a guy disappears for a year, by the time he comes back, no one is left who knows who he is because all they care about is Hulk Hogan.  It makes me sad.
-Please let Sting get horribly injured between now and Slammiversary and Abyss take his place only to pull off his mask to reveal Joseph Park just moments before he beats Bully Ray to become heavyweight champion!  OK, so it's not gonna happen at Slammiversary but it NEEDS to happen.