Come on, dude: So we open Raw with the 10 guys who saved Daniel Bryan on Raw last week (RVD, Dolph Ziggler, Kofi Kingston, The Usos, Primetime Players, R-Truth, Zach Ryder, and Justin Gabriel, whom I will henceforth refer to as the Proletariat) all lined up on stage for what appears to be another of Hunter's delightful town hall meetings.  Trips and Steph come out and WELCOME the crowd to MONDAY NIGHT RAW like so many Vinces past, complete with Steph all-too-conspicuously dropping a cheap "GREAT TO BE HERE IN (CURRENT CITY)!"  Long story short, it turns out they brought the Proletariat out to thank them for "taking matters into [their] own hands" and "finally being men" as if this were all some elaborate test.  HHH adds that he's sure it had nothing to do with Daniel Bryan but RVD cuts him off to inform him that they were, in fact, fighting for D-Bry.  "Wow," HHH exclaims, musing that he's never heard of a wrestler fighting FOR another wrestler to be champion rather than fighting to BECOME champ.  An increasingly-less-rare valid point for 3xH but nonetheless he decides to give the Proletariat what they want, which of course is a match similar to the one Vickie made on Smackdown except equally unfair the other way--an 11-on-3 handicap elimination match against the Shield.  Hunter explains that the reasons the Proletariat are upset are all the fault of the Shield who have "run roughshod" over the WWE "since they walked in the door", totally throwing them under the bus to placate the Proletariat.  Check out the "wtf Hunter" faces on the Shield at the end of this segment...priceless: 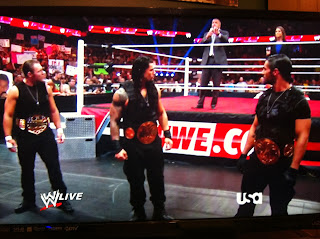 During the break, the Bourgeoisie (HHH and Steph) announce a few more matches that appear to be geared toward softening up the Proletariat for their big 11-on-3:
-Kofi Kingston v. Alberto Del Rio
-Primetime Players v. Wyatt Family
-Rob Van Dam v. Randy Orton

TEAM HANDSOME: Kingston v. Del Rio was the next match and it was a Kofi Kingston match until Del Rio, of course, started trying to break Kofi's arm (check out Kofi selling the pain in his arm when he's gearing up for the Boom Drop--brilliant).  The highlight of this match, however, was this guy: 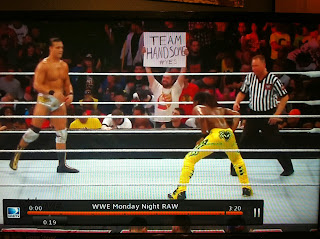 Cul-de-sac of Disappointment: Seriously, this is like Miz's greatest talent.  Last week he took a ridiculously sympathetic beating from Randy Orton and now he gets an excruciatingly condescending verbal lashing from our faithful COO.  He tells him he can't let him face Randy Orton because "God knows what he'll do to you" but allows him a platform to speak his mind via MizTV with special guest Big Show.  Fast forward to the segment and before he brings out Big Show, Miz takes care to articulate to Orton that "payback will come and it will be awesome."  You couldn't make this stuff up (except for the sad irony that someone actually does and gets paid for it).  He then begins berating the Big Show for what he's done to the things Steph has made him do and just as he calls her a "castrating witch", her music hits.  Steph then starts dropping fecal bombs of truth straight into Miz's purse-lipped mouth about how he's basically a WWE birthday clown before ordering Big Show to KNOCK HIM OUT which, oddly, he does in like 0.2 seconds flat.  Which makes me kinda think that they're building up toward Big Show having been in on it all along.  Because, seriously, how great would this be if it ended up with Big Show, HHH, Steph, and the Shield all laughing hysterically at footage of Big Show acting so tortured and conflicted about being forced to knock people out?  I mean, Shield are basically the hyenas from The Lion King anyway, right?


Randy Orton "versus" Rob Van Dam:  Once again, Orton takes the title for being the kayfabe most dangerous, brutal, sadistic dude on the show as he doesn't so much have a match with RVD as he does utterly annihilate him.  By the way, is there a more pointless plot device in WWE than Ricardo Rodriguez?  Remember when Ricardo was Del Rio's manager and they were super happy fun time best friends forever and it totally made sense and Ricardo's introduction was one of the funnest things on Raw?  You probably can because it wasn't that long ago even though it feels like it was for-fucking-ever ago.  But he's wearing an airbrushed shirt so obviously he and RVD are totally super best friends too.  Too bad they can't talk about the real reason they're best friends.

How Punk Got His Smile Back: C.M. Punk comes out and Chicago explodes, of course.  Punk continues to be the best wrestler on the mic but once again, the show is stolen by Heyman (at least in the words portion of this segment) as he rolls out on a FUCKING RASCAL SCOOTER.  OMG DYING. 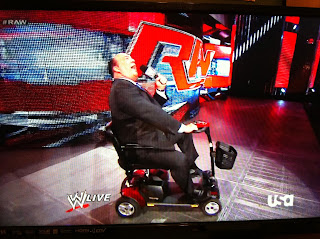 So much about this is just so YES.  Just the way Heyman talks is exactly how wrestling people are supposed to talk.  Listen to the way he says "C...M...PunKCH" or "the SECOND...Best...in the WorlDUH."  Punk's face when Heyman's Rascal "malfunctions" is perfect--although WWE should have gone with a shot wide enough for people to see him drop the mic because unless you're in the arena or perceptive enough to hear it, you'd never know it happened.  Plus, GOD THIS SUICIDE DIVE: 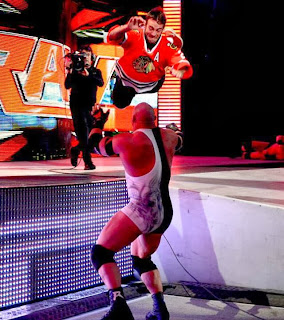 I'm excited for the Ryback/Punk feud.  People have said that their first feud was pretty lackluster--I don't really know because I wasn't watching at the time--but the feeling I get is that Ryback has progressed a lot since then, especially in the ring.  Although I've actually been hearing that there was a lot of backstage heat on Ryback for botching the table bump so that Punk barely caught the table and got banged up pretty good.  Who knows, maybe that will add some shoot heat to the feud and make it really intense?  I'd love to see those two tangle in the almighty Cell next month!

A Shieldspearean Trililoquy: My heart swelled for this.  It's been so long since the boys have done one of these wonderful handheld cam promos and I couldn't be happier to be reminded how phenomenal Ambrose is on the mic.  You are the hounds that hunt the wolves of my heart. :)

Daniel Bryan's Going to Fight II: D-Bry comes out for a little Johnny Explainer time where he explains why it's beyond ridiculous to accuse him of conspiring to cheat to win the WWE title before he's interrupted by the Shield.  But then the Shield gets interrupted themselves...


CODY AND DUSTIN!  DUSTIN AND CODY!  My heart grows three sizes and breaks the little measuring device from How the Grinch Stole Christmas.  Cody is way too good here.  Listen to him screaming "THAT WAS MY FATHER!" and tell me this isn't the most compelling storyline in WWE right now.  I hope this ends in a War Games match at Hell in a Cell with Dusty/Dustin/Cody v. Vince/HHH/Orton because holy shit you guys.

The main event was pretty much everything I love about wrestling all at once.  There's nothing I can say to do it justice and once again, HOLY SHIT THAT ENDING...


Unfortunately, I'm a little pressed for time this week and Smackdown didn't really push the narrative forward a bunch so this will be it for now...