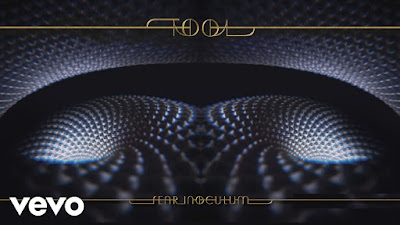 It's finally here. After 13 long years of waiting, we have finally been graced with a new Tool album and if it was possible for this to live up to the hype, it has done so. The album dropped on iTunes around 9:30 last night for those of us who pre-ordered it and I immediately listened to the entire thing in headphones and took notes with the intention of synthesizing those notes into a standard review. But nothing about this is standard. This is a culmination of Tool as a band. So I wanted to do something a little different. Something a little more in the spirit of this album. So I decided to take my notes, polish them up a bit for readability and post them as is to give a sense of the stream-of-consciousness experience I had listening to this album for the first time. I hope it works as well in practice as it sounds like it will in theory. Enjoy!

I really like this as an extended "intro." More a meditation than a song. Almost like a kirtan or a dhikr or a taize chant. Repetitive in a deeply spiritual way, for a deeply spiritual purpose. Maynard sounds INCREDIBLE on this song. Classic kinetic Tool bridge at 4:00 followed by a short homage to "Reflection." This song feels like an exploration--as meditation should. This might be the most spaced out Tool has ever been and that's saying something. The visceral, pounding riffs and rhythms are almost entirely replaced by a swirling, floating, creeping ambient tapestry of melody and texture.

Whoa this is different. This is so Tool and yet unlike anything we've ever heard from them before. If the title track was a meditation on everything that has come before, this song takes a big step into the future. I'm kinda speechless right now. Holy shit this just got serious about 6 minutes in--whatever is happening with the drums and the tabla is fucking massaging my brain cells one by one. AND HOLY SHIT THE SURROUND SOUND. Oh man this is a slow build on this bridge and it is INTENSE and GROOVING. 3 minutes building on this so far and OK HERE WE GO RIFFS ARE SLAPPING HARD AF YES LORDT.

OH MAN I LOVE THIS INTRO WITH THE PICKING. Once again very Tool but unlike anything Tool has ever done--this is becoming a theme. This album as an extension and further exploration of everything this band has ever done. God the guitar work in this song is vibrating my whole being. This is another one that's very meditative in some of the same ways as the title track. Tool is clearly a band that has matured and aged in a lot of ways. They have so much focus and confidence in what they do and they absolutely know exactly who they are and who they want to be. GOD I LOVE THIS CREEPING BREAKDOWN. TRIPPY SOLO. The drums are so heavy but the guitars are all atmosphere. Even this "heavy" riff is more atmospheric and the drums are REALLY driving it and now they drop out and GOD THIS IS GOOD. The breakdown drops and I am DEAD. It's not even heavy it just ROLLS SO FUCKING HARD. The production on this is also FLAWLESS. As crisp and tight as literally anything I've ever heard. Which makes these not-terribly-heavy riffs CUT HARD. And now the kinetic emotion of the bassline progression to give it that beautiful splash of color before going back to the CUTTING riff and drumming which brings the song to a definitive close. Wow.

Ambient trippy shit. Very sci-fi. Reminds me vaguely of the "alien spaceship landing" thing they used to do in their live shows for a while. In fact, I'm getting a strong feeling that this might be the exact thing that played over that sequence. Or at least something very like it.

This somehow feels like the centerpiece of the album in some important way. It's the song they've been playing live for the longest--at least part of it they've been playing live since 2016. The chord progressions on this album are a new direction for the band but a familiar one. Taking everything further. Following the threads of their past into the future. Evolving organically. These songs unfold like flowers blooming and with this album it's clear that the band themselves and their music has been unfolding the same way. They're doing a LOT more with vocal harmonies on this album as well. Maynard's vocals are much more subdued than ever--much more of an instrument that blends together with the others. Tool has always been a band that, more so than any other band, is made up of four equal parts that meld together as one seamlessly and this is truer than ever with "Fear Inoculum." Each "instrument" (including Maynard) has never been SO equal a contributor to the overall sound and never has the overall sound been THIS cohesive. Amazing.

The beginning of this song actually is the first thing on this album that would probably be unrecognizable as Tool if I didn't already know it was them. Wow this is beautiful and a major departure for this band. The richness of Maynard's voice and the amount of control he has is head and shoulders above the past albums. I do miss the unbridled energy his voice used to have but I love this too. It's just a different approach. A mature approach. Less emotional but every bit as beautiful. This band dabbles more in subtlety than ever on this album. They still retain their fire but it's a controlled blaze rather than a raging inferno. And mostly it's a candle flame, holding steady while simultaneously dancing wildly in the movement of the air.

This started out as a pretty standard trippy spiritual Tool interlude and just turned into some CRAZY experimental trip-hop house shit I don't even know those genres by name but this is nuts. OHHH this is totally the Danny Carey drum solo they've been doing live. Or at least something VERY much like it. That's really cool.

Here we go. The epic Tool closing song. OK SO THIS IS THE HEAVIEST SONG ON THE ALBUM APPARENTLY. "Here we go again." YUP. "It's not unlike you. We know your nature." How appropriate. This is definitely the most old school Tool song on the album but still infused with the new feel of this album. This song is as much a meditation as the rest but it's a meditation on heaviness. Exploring riffs and wailing guitars and hammering drums. EPIC riff just before 12:00. Is that a hammer dulcimer? Gorgeous. Wow the storm clouds are gathering for an epic finale to this song and this album. Is there enough time left to properly bring this beast to a close? Resolves into a modest, controlled, subtle ending. Seems fitting. With this record, Tool has made a clear thematic choice not to lose control and while it might not necessarily be a popular choice, it is a firm one and they carry it through to its logical conclusion. It's never more clear than on "7empest" that Tool is a very different band now but their essence is still the same.

Never been a huge fan of the noise tracks at the end of the last couple Tool albums. Don't dislike them just never had much use for them really. "Lateralus," "10,000 Days," and this album would all be better off ending with their closing songs than these weird noise experiments. They add nothing to the artistic statement being made. Still, a minor complaint for a leviathan of an album.