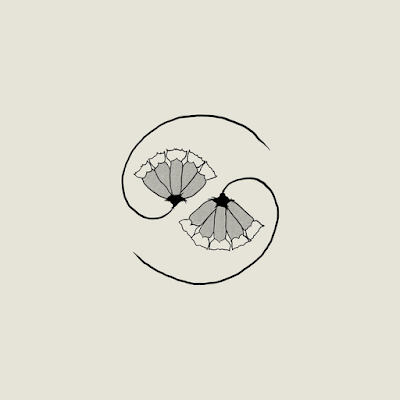 we wrote it on the road mostly. when that was still a place.

and then recorded it in masks later, distanced at the beginning of the second wave.

it was autumn, and the falling sun was impossibly fat and orange.

we tried to summon a brighter reckoning there,

bent beneath varied states of discomfort, worry and wonderment.

we fired up the shortwave radios again, for the first time in a long time.

and found that many things had changed.

the apocalypse pastors were still there, but yelling END TIMES NOW where they once yelled "end times soon".

and the transmission-detritus of automated militaries takes up more bandwidth now,

so that a lot of frequencies are just pulses of rising white static,

and the ham-radio dads talk to each other all night long.

this record is about all of us waiting for the end.

all current forms of governance are failed.

this record is about all of us waiting for the beginning,

and is informed by the following demands=

take power from the police and give it to the neighbourhoods that they terrorise.

end the forever wars and all other forms of imperialism.

tax the rich until they're impoverished.

much love to all the other lost and lovely ones,

these are death-times and our side has to win.

we'll see you on the road once the numbers fall.

This is a sort of preface written on Godspeed You! Black Emperor's Bandcamp page (I guess this is kinda like the new CD liner notes) about G_d's Pee AT STATE'S END!, the Canadian anarchist post-rock demigods' follow-up to 2017's "Luciferian Towers". In many ways this album is definitely the logical progression from "Luciferian Towers", expanding and pushing the boundaries of the newly simplified, tightly focused sound the band found on that album while also melding in certain band staples that were missing from their previous record--for example, the shortwave radios mentioned above make their appearance almost immediately in 'A Military Alphabet (five eyes all blind) (4521.0kHz 6730.0kHz 4109.09kHz).'

'Job's Lament' and 'First of the Last Glaciers' are the perfect opening musical statement for a record following up "Luciferian Towers", setting the tone perfectly for the next step in the band's evolution, followed by the hauntingly desolate menace of 'where we break how we shine (ROCKETS FOR MARY)', a noise track featuring what sound like explosions going off in the distance with an almost meditative quietude. 'Fire at Static Valley' is vintage Godspeed--apocalyptic and hopelessly hopeful. Wallowing and warbling through expansive (yet somehow claustrophobic all at the same time) dread-soaked soundscapes. Music that sounds "apocalyptic" is somewhat of a cliche at this point but there is no other way to accurately and adequately describe Godspeed's music than that it really, truly sounds like the end of the world and this piece is a prime example. So simple, so overwhelming and dripping with unspeakable melancholy that it sometimes honestly does feel like the world is ending--like the world is always ending.

The shortwave radio returns once more in '“GOVERNMENT CAME” (9980.0kHz 3617.1kHz 4521.0 kHz)' before giving way to something not quite like anything the band has ever done before: 'Cliffs Gaze'. It seems to have all the same elements we've come to know and love from Godspeed but somehow...arranged differently, maybe? And with new ones stirred in and swirling through all the old familiar notes. When the movement reaches its climax, that's right about the time an irrepressible smile beams from your face and maybe your eyes get a little misty as you think to yourself: "They did it again. I can't believe they did it again. How do they keep doing this?" It's like you can't imagine such staggering, otherworldly beauty could have come from mere human beings but it did and it does and it has and it probably will again and again and again. It seems impossible but that's just Godspeed You! Black Emperor. Impossible as ever. And it's not over yet.

The band gives you just a moment to breathe before pouring the melodies of 'cliffs’ gaze at empty waters’ rise' over you like a pitcher of sun-showers and ascending the cascading slope of light into the gates of Heaven itself, the clanging bells of 'ASHES TO SEA or NEARER TO THEE' signaling your arrival in eternity, where 'OUR SIDE HAS TO WIN (for D.H.)' wraps you in the warm embrace of salvation and soothes you into a great forever dream with its droning, dulcet strings.