I feel I must run to John Carter's defense as this film sees to be dying by indifference, at least in America. Two out of three of us here in the Vundablog sphere went to see Disney's John Carter.I know (sigh) I know, we're rolling in to save the big 250 million dollar movie by Disney one of the most prolific and biggest companies on this planet. Apparently we are of the few, who not only liked it, but dare I say loved it. In fact according to rotten tomatoes the average movie goer that saw it basically liked it, with a 69 percent audience approval rating. However, the critics score is 51 percent, which I still find impressive with a big budget sci-fi film, because those usually score low with critics. I am proud to be among the 69 percent that watched it and liked it.

It feels very silly defending a huge blockbuster of a film, a huge blockbuster owned by a corporation that has managed to make itself a global brand to almost every ethnicity, race, and age group internationally, but movies do not deserve derision simply by who's writing the checks, especially if that move was actually a fine entertaining hoopla. John Carter was such a film, and I have recommended it to everyone around me.

Our theater was pretty full, not what I would have expected for an opening weekend, but still enough to make it enjoyable and understand an audiences dynamic with a film. We saw it in 3D IMAX. I had no idea what a rare experience I was sitting through. There I was sitting with the few earthlings actually interested in John Carter, and my mind was  totally blown. It wasn't becuase of the IMAX experience it was simply for the movie. The IMAX experience is always fantastic(don't get me wrong), the way that rock music sounds better really fucking loud, the rule of thumb is movies play better on a big screen and when it comes to screens bigger is almost always better(It wouldn't really help Pride & Prejudice, but a movie like John Carter thrives off the big screen experience). So the giant sized IMAX screen was indeed magnificent. It felt as if we the audience could walk into the vast  neverending landscape of the planet Mars, or as the audience will learn to call it by it's true martian name Barsoom. As for the the 3D, to be honest, I barely noticed it. However, I do not believe that is a failure, but a success. I was so into the story and so blown away by the acting, shots, and the effects, that the 3D melted into just a standard thing. I noticed the 3D no more than I noticed the flickering light of the projector. John Carter is a movie of a movie(I don't know if  anyone else understands Stephen Speak but here's an attempt).

The 3D was pretty forgettable for me, it mainly helped to give the film atmosphere. The rest of the experience was pretty awesome since I was not expecting to find this movie decent, let alone good. As the story went on I drew more and more in to the characters, and the beautiful backdrop of Mars was even more engrossing. I think the design of the Tharks was fantastic, they captured the humanity on their faces as well as the novelty of their alien biology. That is due to Pixar's involvement, no doubt.

Edgar Rice Burroughs wrote the original novel the film is based on in 1912. Burroughs is the beloved American author who also created Tarzan. It's interesting that Tarzan, which has a richer film history, seems to be a less fresh or relevant character today, while John Carter, a character just as old, is more modern and more like the anti-heroes and science-fiction everyman badasses that prevail in comics, video games, and films in nerd-pop-culture. I heard some dumb jocks leaving the theater complaining that the names of the characters and things in the world sounded to corny.

This is the original of course it sounds corny now because everyone ripped this thing off and created the cliche. I don't see that campiness as a negative. For my part I  love that sort of camp and cheese, it must be a appreciated like a sunset, or a good game of Tetris. The story has intriguing twists that I didn't expect from a novel written in 1912. For example, the author Edgar is a side character in the story which has the postmodern literary vibe my collegiate ass thinks is so hip and cool. The dialogue had the right mix of plot and character that felt fresh fromwhere I was sitting.  For a more in depth, more hardcore, and nitpicky story review I will gladly point you to a friend Julian Perez's blog..

I agree with most of Stephen's sentiment, these tales are timeless. I will admit, even as an English major, I was never very familiar with Burrough's work. I knew about Tarzan of course, but if I had know that such a gem as 'John Carter' had existed I would have read these stories a lot sooner. John Carter of Mars is one of the reasons we have Luke Skywalker, Jake Sully, Neo, and a whole host of "stranger in a strange land" characters. To the modern audience John Carter seems cliche, but he IS the original. So have some respect modern audiences. As 'The Rock' says: "Know your role!"

On the casting front Taylor Kitsch was the perfect choice for this role. I've been a Kitsch fan for a long time, watching him grow and get better in every season of Friday Night Lights(his beloved NBC football drama). Kitsch plays Carter with the same brooding country boy "badassity" and sexual tension he invested into his character Riggins on Friday Night Lights. Lynn Collins is also pitch perfect casting able to play a princess with all the humanity, and epicness necessary.

The supporting cast had no exceptionally controversial casting choices. Everyone got hired too do what they do best. All the voice work is superb. Pixar's acting chops on CGI characters has earned them a sit down with James Lipton in the actor's studio. Willem Dafoe's vocal performance was probably one of my favorite parts of the whole film.
Also the the adorability they pump into John Carter's martian pet slug who happens to have super speed is worth $250 million.
I think that Disney pulled a Max Bialystok here and somehow made money from their giant $250 million dollar bomb. The movie is still making money overseas, but other than that this is a bonafide clunker at the U.S. box office.


Disney pulled too many punches with this movie. Primarily with their ad campaign and promotion of the film.
Why did this happen? Was it the idea of such a huge bloated budget that turned off audiences? I doubt it since they still go and watch those overburdened lights, sounds, and explosion spectacles known as the Transformers franchise. Was it the Sci-Fi? Possible, maybe only James Cameron can make anyone sit in a theater for almost three hours and care about strange new alien worlds. 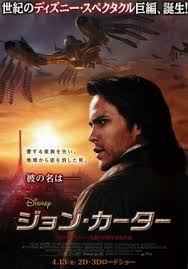 The ads were too generic for one, silhouettes of Taylor Kitsch in a red back drop with a name that no one knows or cares about is not going to bring in big audiences. It was also said that Disney lost the "of Mars" part of "John Carter of Mars" in order to attract the female audience. All I have to say is this, if the sight of Taylor Kitsch running around shirtless for an entire movie wearing a loin cloth is not enough to get them in the theater, then no amount of creative editing is going to do it.

Why not sell women with the bold feminist character of Dejah Thoris, call the movie "A Princess of Mars" and sell them on a Disney  space Princess(Just typing that gave me a nerd boner)

The movie never dragged for me, because I felt like I was living the Barsoom adventure with John Carter. The end of the story ties to the beginning in a great way and sets it up for a good formula and plot for the sequel, which may or may never come in film form but awaits the audience in book form Go watch it in theaters while you can.