The Avengers :Yeah you're gonna want to see it.

Before the terrifying Disney legal monsters come and take down this post I will commit to NO SPOILERS, though by now a few thousand people have seen the movie so I mean "eh". I saw Avengers this weekend with fellow blogger Stephen Escudero.

We were very lucky to have a last minute connect. So we woke up at 7am and we were on our way to the movies.

For a possible 10am viewing, it was however first come first serve and we could've been turned away.

The wait was pretty smooth, the anticipation was the worst thing.
The security for the event was no joke, they were protecting the movie at every turn from dastardly pirates. We got pretty good seats center and to the right.
The people running the preview event really wanted people to see the movie, they packed people everywhere they could spare with out getting them in the aisles(you know in case a fire happened, they were trying to make sure we didn't ALL die.) There were no trailers, just glorious Avengers.
THIS.MOVIE.WAS.AWESOME.

Avengers pulled no punches. It was by far the strongest of the marvel films. Strong as a stand alone piece and also flat out better than the previous marvel films. It's easily my favorite of the films under the Marvel studios banner. It had a totally unique rythym and flow that felt perfect for a Marvel superhero movie and sets the standard for superhero movies to come.

This movie is for everyone who even has a hint of affection for Avengers, and if you are a tried and true fan you are in for a treat. It has action, humor, amazing awesome heroic shots.

Hulk get some of the greatest onscreen moments and Ruffalo shines as Banner, he felt the most relatable to little old me. Everyone shines Hemsworth, Evans, Downey, Hiddleston, Jackson, Paltrow, Skarsgard, Smulders, Gregg(Agent Coulson), and especially Johannson. I want to see Scarlett in her own Black Widow movie directed by Whedon.

I would just like to take the time out to say that I am VERY proud of Joss Whedon. I hope that doesn't come off as condescending but I mean it. I have loved him since Buffy the Vampire Slayer, but he has reached a great point in his career that I really think has opened doors to the mainstream audience really appreciating his talent. It was great timing (or well coordinated timing) that "Cabin in the Woods" came out this past weekend. This is the ultimate Joss gallery on display for the next few months. These two movies are a perfect way to taste the best of Joss Whedon, the great writer, and Joss Whedon, the funny motherfucker. I will be doing a separate mini review for Cabin because it  deserves one. 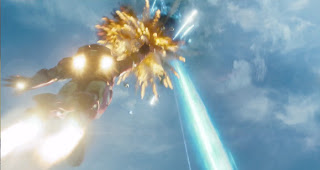 So Avengers. See it, live it, love it. I will be watching it again on May 3 as I shelled out my forty bucks for the Marvel Marathon event, which was an amazing idea on AMC's part.

Get excited people, this movie DOES live up to the hype.