Tenacious D has a new cd called Rize of the Fenix and you should own it. Why? Because they are the fucking tits, sir.

First, a Tenacious D awesome fact: Did you know they had a cameo in BIO-Dome, a super guilty pleasure movie of mine from my adolesence starring Stevie Baldwin and Paulie Shore.

I hope I didn't scare you off by opening a review of their new 2012 cd with a Bio-Dome reference. Don't worry, I'll save it right now and let the D's music speak for itself.

If you clicked over after a Bio-Dome clip and Danny Mcbride being the most badass Roadie ever then thank you very much. You're the shit. I have been enjoying a lot of new music recently thanks to Spotify. Chief among them Rize of the Fenix the new Tenacious D album. 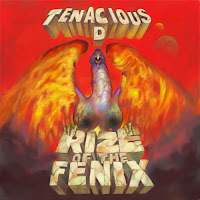 First off Rize of the Fenix is worthy of the Tenacious D leagcy. The D is back and they adress their history as they have always done with a new son the Ballad of Hollywood Jack and the Rage Kage about the disparity in fame between the bandmates. Writing their legacy in song is obviously nothing new for the D. All in all the cd sounds masterful the rock is rocking.

The jokes have all the Tenacious D taboos we love the explicit cursing and My favorite track immediately was the Bob Seger-esque ode to Roadies you just saw above. Titled simply Roadie. In the Spotify commentary by Teancious D, Jables mentions that it was inspired by all the amazing roadies and also written for his roadie video-game super hero Brutal Legend. The video for this song makes me wish it was full feature length film about Danny Mc Bride as fucked up roadie. I love the way they used color and accentuated the story of the song. The albums titular song Rize of the Fenix is probably the most obviously superb song.


This is probably one of my favorite music videos in a long time. Finally using cgi and our cultures reliance on special effects to poke fun at how overproduced music videos of today have become. The D knows how to keeps things epic and this is the D's 'Bohemian Rhapsody'. It moves musically through different jam outs and rises and falls. Another stand out favorite jam is '39' which is about bedding an older woman. Spotify has commentary tracks for every song, one of their songs 'Death Starr' was written for a Heavy Metal movie  that never got made. They also mention that riffs on this cd have been bouncing around since the inception of the D. The spotify commentary is must listen for a die-hard Tenacious D fan. 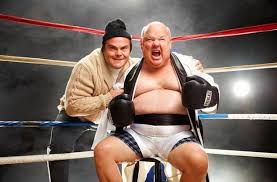 The D's workout track is in the vain of the Karate Kid song, and Rocky songs. To Be the Best is only a minute long, which is probably because Rage Kage and fans of the D can only work out for that long. :) I count myself among them. However if I filled an 80 minute cd with 80 tracks of To Be the Best, I might spontaneously combust during exercise.


The D has always had a special place in my heart. They are MY band as far as I'm concerned. Why? Because I have always felt like an un-official member. All through out high school I'd jam to Tenacious D and rock out like Jack Black taught me to. I did have a passing resemblance to Jack Black and at the time there were those among my graduating class who would call me fat Jack Black affectionately. I always enjoyed it and was proud to be allied with the D. Since then, Jack Black has been a sort of role model in my life. In fact, I can positively attribute his brand of goofy/cool/cuteness as one of the reasons I have gotten laid in my life. So thank you Tenacious D for another fantastic cd and I hope you bring the tour down to my home town.