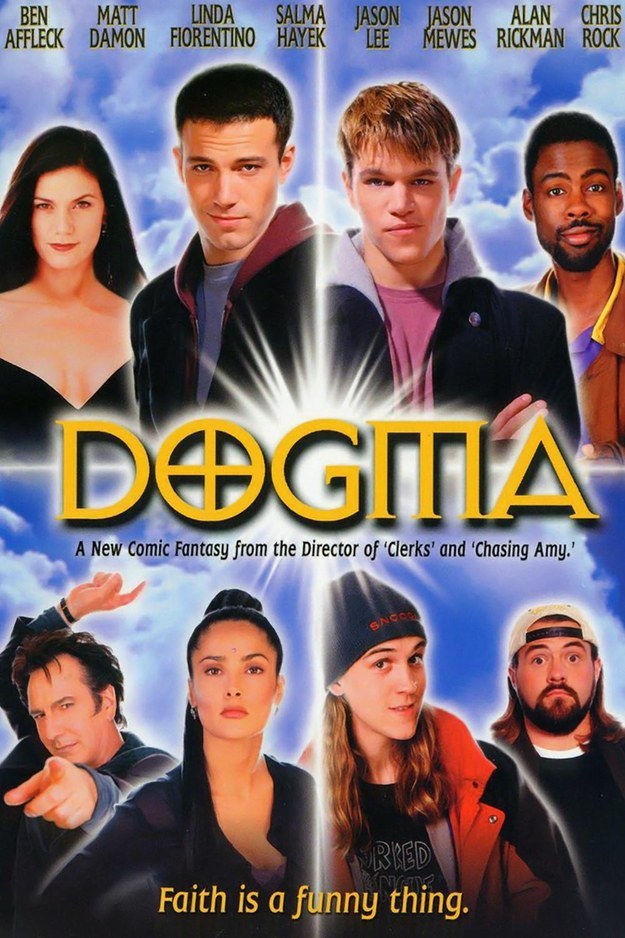 There are so many interesting theological concepts and questions being explored in this movie that it’s almost hard to know where to start. So perhaps it’s best to start where the movie starts: Bartleby and Loki. Bartleby and Loki are two fallen angels who have been banished from Heaven (to Wisconsin) for insubordination after Bartleby convinced a drunken Loki to throw down his sword and resign his post as Angel of Death. The thing I find most interesting about this is that, when Loki tells Bartleby he thinks he should resume his post, Bartleby reveals a very salient piece of information: there hasn’t been an Angel of Death since Loki resigned. So, while Loki was banished from Heaven for resigning the post, and Bartleby is banished for merely convincing Loki to resign--God ultimately decides that they were right; there should be no Angel of Death. It brings up a lot of questions about the idea of a God that would banish someone for refusing a command, subsequently conclude that they were wrong to issue said command--and, therefore, Loki (and, by extension, Bartleby) was right to disobey said command, and yet continue to punish this disobedience.

Bartleby and Loki certainly aren’t the only interesting characters in this movie.


There’s Serendipity, the Muse who has lost her inspiration. There’s Jay and Silent Bob, the goofball stoners who consistently defy expectations by stumbling onto the solutions of some of the major problems for the group and being willing to fight for what’s right. There’s Azrael, the demon who concocted the scheme to get Bartleby and Loki back into Heaven in order to unmake existence because he’d rather not exist than be in Hell.

Perhaps the most interesting supporting character to me is Rufus, Jesus’s unknown thirteenth apostle, written out of the Bible because he’s black. The idea of disciples of Jesus who were written out of the Bible is certainly not a new one. There is much discussion in many Christian circles of the many women that Christ spent quite a lot of time with and who are barely mentioned in the Bible. Rufus also brings up the Bible’s glaring gap where Jesus’s adolescence should be (omitted, he claims, to avoid embarrassment and negative impact on the public’s opinion of Jesus) as well as claiming that Jesus had brothers and sisters in order to articulate to Bethany that she is the last living relative of Jesus Christ.

Bethany is perhaps the most interesting of all the characters. She’s a Catholic who has lost her faith after being diagnosed as infertile--the revelation of which caused her husband to leave her--and now works at an abortion clinic. I love the idea of the main protagonist of the “chosen one” narrative of a religious story being one who is in crisis of faith. We see her thrust into an incredibly challenging role of savior of the world--so challenging a role that she wishes to throw it off and run away. Rufus even comforts her telling her how much she reminds him of Jesus Christ when he learned that he would have to die to save the world. It’s such a powerful and relatable idea. Most, if not all, of us have been chosen to do something important that we didn’t know whether we were capable of doing. Certainly, as an aspiring minister, this idea strongly resonates for me.

And there are so many other strongly resonant ideas, as well. Such as the idea that if Bartleby and Loki pass through the arch and receive plenary indulgence, permitting them back into Heaven, it will disprove the doctrine of God’s omnipotence and infallibility, which will destroy the world. Personally, I have to wonder why God’s omnipotence and infallibility are considered so essential to the very fabric of the universe. I never saw them as such. I also wondered why the very fact that Bartleby and Loki could have gotten into Heaven doesn’t in and of itself disprove God’s omnipotence or at least God’s infallibility.

I also did a little bit of research into plenary indulgences and what I came up with is very interesting. Apparently plenary indulgences were a concept that the early church came up with as remissions of the temporal punishments of sin. Interestingly, based on what I read, indulgences are not actually an absolution of guilt or of the resulting eternal punishment of sin which can only be absolved through confession and/or penance. Even more interestingly, I found that, apparently, in the Middle Ages, indulgences started being abused, and were, in fact, widely sold. Which makes them such a perfect microcosm of the corruption of Cardinal Glick and the Catholicism Wow! campaign which seem to be corrupting and commodifying the church under the guise of “modernization.” Cardinal Glick, it seems, in a, perhaps, almost noble (but really mostly just greedy), though misguided, attempt to bring more people to the church, has evoked a long-forgotten doctrine which became so corrupt that it became one of the sticking points of the Protestant Reformation--and which, apparently, could unmake all creation. Rufus even compares Glick’s campaign (and specifically his stated goal of “hook[ing] ‘em while they’re young”) to the tobacco industry and Glick’s only response is “Christ, if only we had their numbers.”

Another interesting moment happens when Bartleby and Loki find out the ultimate consequences of them seeing their plan out to its logical conclusion. Upon learning that they could destroy all existence by getting back into Heaven, Loki has a change of heart. Bartleby, on the other hand, does not. He is consumed by his rage at God for giving humans free will while demanding servitude of angels. He laments their being given a choice to ignore the truth and live in blissful denial of God while angels are forced to know the truth and unable to turn away from God--and, in fact, are punished severely when they do, being sent somewhere even worse than Hell: Wisconsin.

It is only when God intervenes (thanks to Bethany taking God’s human incarnation off of life support--an idea accidentally inspired by horny stoner Jay; and, interestingly, this human was, in part, being kept on life support thanks to the donations of Catholics such as those at Bethany’s church) that their plan is foiled. It is at this point that God is revealed as a woman--certainly a radical idea among most Christians. But then, Rufus reveals an even more radical idea. He says that God isn’t actually a woman--that she isn’t actually anything. In a sense, what Rufus tells us here is that God is nonbinary--perhaps agender or genderfluid. I’ve long felt this way about God. The idea of a gendered God seems so limiting to me. I can only conceive of a God that far transcends our human ideas of gender. And I love the fact that this movie challenges people to think of God in these same ways. To expand our understandings of God and come to grips with the fact that God far surpasses our human understanding. It’s no wonder this movie was condemned by some Christian groups as blasphemous.