Here we were again.  The moment I had been waiting for all year had finally arrived.  General Assembly 2013 in Louisville, Kentucky.  My good friend Jeremy Ritzmann and I had been texting back and forth for weeks about how we could barely contain our excitement.  His wife Sarah even posted on Facebook that she was cleaning their apartment in preparation for me coming because every time I come it's a blessing which truly warmed my heart.


I must have spent the better part of Friday and Saturday before I left figuring out everything I would need and packing it into one suitcase and one backpack--this included a small selection of comic books, a copy of "Behind the Kitchen Door" to have Saru Jayaraman sign, a copy of Robert's Rules (because you never know when it's gonna come up), and a multi-colored array of UU t-shirts.

I took a plane I could barely stand up straight in to Jacksonville and Jeremy was waiting for me at the terminal when I arrived.  We hugged a great, big hug that was a far-too-long time coming and then set off for Jeremy's apartment.  On the way there, we stopped at a flea market outside of town and I bought a few more comic books.

Spent the afternoon chilling with Jeremy and Sarah and their two-year-old son Judah (who is just about the smartest, coolest kid on the planet) and then later we went over to Sarah's grandparents' house to have dinner with her family.  Sarah's grandmother is a sixth generation Universalist and her mother is a very active member of their congregation (Buckman Bridge Unitarian Universalist Church) so that definitely made for an interesting and pleasant dinner.

After dinner, we started watching Game 5 of the NBA Finals between the Heat and the Spurs which was a fairly depressing spectacle to behold but didn't put too much of a damper on my evening.  Went back to the apartment and fell asleep watching the season premiere of True Blood with Jeremy and Sarah.  Having never seen True Blood, I was a bit confused but mostly just wildly entertained by how cheesy it was.  But I digress.

Not much of note happened Monday.  More chilling with Jeremy and Sarah at the apartment and making preparations for the trip to Louisville.  Spent about an hour at the pool, which was nice.  Other than that, nothing particularly interesting happened until about 11:30pm when we finally raised anchor and set sail for Louisville with our good friend Erik Slader.

The ride to Louisville was long (and the road was muddy and rough...OK not really...) and full of sleep.  Well, at least for me and Erik.  Jeremy stayed up all the way through the night, hopped up on Starbucks Doubleshots and Iced Coffee to drive the entire 13 hour drive.  We stopped in southern Georgia for Waffle House at about 3am for "breakfast" I guess you would call it (it certainly contained all the elements of breakfast anyway) and in Atlanta at 6am to have coffee at Starbucks with Tim Atkins of the UU Congregation of Atlanta but otherwise we pushed onward all through the night.


I woke up eventually to daylight and the Smoky Mountains.  I basically slept my way through Georgia almost entirely and now we were in Tennessee snaking through gorgeous mountain ranges shrouded by low-hanging clouds.  It had been much, MUCH too long since I had seen mountains so I snapped a handful of digital photos along the way. 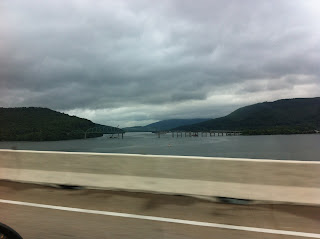 Finally, we made our way into Louisville and checked into our amazing two room suite at the Galt House just two blocks from the convention center.  After registering early to beat the crowds, we headed over to "Fourth Street Live" which is basically a whole block of bars, clubs, and restaurants where locals go to party.  We found a really cool Irish Pub called Ri Ra and found out we could reserve a room in the back for later to watch Game 6 of the Finals. We returned to Ri Ra at 9pm and while everyone else actually interacted with each other like social beings, I was glued to the flat screen TV and the rollercoaster ride of Game 6.  Not to digress too far from my point but I just have to say that I have been watching basketball for over 20 years and that was the single greatest basketball game I have ever seen in my life.  When Ray Allen hit that three, I literally ran around screaming like a maniac.  I still can't process the fact that that actually happened.  My GA was |this| close to being totally ruined (OK, not really, but hyperbole is necessary in this case).  Then a miracle happened in Miami.  And the next morning I was more ready than ever to begin my General Assembly experience...