Finally, the big day had arrived.  I spent most of the morning watching highlights of Game 6 on ESPN in the hotel room but around midday it was time for Young Adult Orientation.  It's always such a pleasure hanging with the YAs and especially hearing from the amazing YA leaders within our faith.  These folks are not the future--they are the present.  They're not standing around waiting for the establishment to hand them the reigns of Unitarian Universalism or pass the torch or whatever other idiom one might use.  They are asserting their voices within our faith, voices of progressive change screaming to be heard by ears weathered by years of polity and justice work.  The conversations, connections, and community I share each year at GA with these folks are, truly, the Roots that hold me close and the Wings that set me free.  More on that later. 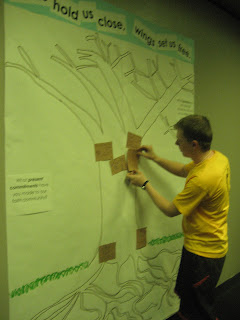 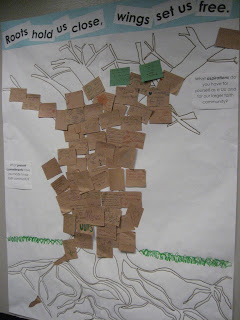 One of the most interesting things about the YA Caucus room was this awesomely creative art project the staff put together.  At Orientation, they passed out brown strips of paper and markers for folks to draw a visual representation of the congregation they're from and write a sentence about what has brought them to General Assembly this year or what present commitments they have made to our faith community.  The bark represented the present, the roots, the past, and the leaves, the future.  Three specific questions were asked for each: 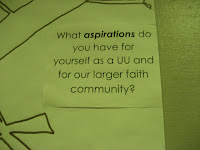 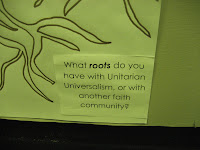 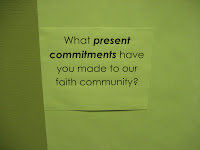 After YA Orientation, I wandered the exhibit hall with Erik and Jessica (whom everyone else had met the night before while I was screaming at a television set--OK, just kidding, I actually did partake in some conversation at halftime and after the game).  We chit-chatted with a few nice folks, especially the folks at the UUA Youth and Young Adult Offices booth. 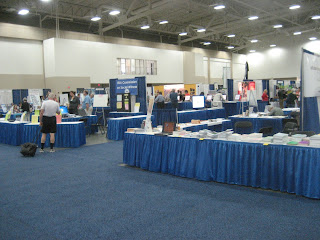 Before long, it was time for the Banner Parade.  My most sincere apologies to my fellow congregants of UU Miami for forgetting to bring our UU Miami banner with me to Louisville.  However, I was very grateful to be invited by UUA Campus Ministry Associate Kayla Parker to help carry the Campus Ministry banner along with Jeremy and herself.  It was the first in a long line of very humbling (in a good way) experiences for me at General Assembly 2013.

After an awesome banner parade and a rousing Opening Celebration came one of the MOST humbling moments of the week: I was invited by UUA Florida District Board President (and über sweetheart) Ila Klion to attend UUA Moderator Gini Courter's reception at the Marriott.  Wow.  Imagine just about every mover and shaker in Unitarian Universalism in one room sharing cocktails, hors d'oeuvres, and conversation. What an amazing experience.  I had a lengthy discussion with Rev. Darrick Jackson, Director of Contextual Ministry at Meadville Lombard Theological School on why he felt Meadville was the right place for me to pursue the ministry--and also had a similar conversation with Justine Urbikas, Meadville's Assistant Director for Recruitment and Communications.  I also had a really awesome conversation with Standing on the Side of Love campaign manager Jennifer Toth that started out being about Immigration issues, then transitioned to being about Florida, and ended up with us making plans to meet up the next night with some other Miami folks to watch Game 7 of the NBA Finals!

All that would have been the perfect end to a perfect first day of GA but just for the icing on the cake, a bunch of us went down the street and hung out at a bar called BBC with a handful of awesome YAs for some slightly intoxicated small group ministry (i.e. a bunch of awesome drunk conversations!).  But the night still didn't end there because I went back to the hotel room a little early and Erik and Jamie (our other roommate for the week) were still up watching "Through the Wormhole with Morgan Freeman" and having some deep discussion about the universe.  We all continued to theorize and philosophize about the vastness of the universe and our place in it and time travel and all sorts of other craziness until we could barely keep our eyes open anymore and then it was finally time for bed...