While Wednesday is obviously the official beginning of General Assembly, it's also more of a warm-up day as it begins at 1pm at the earliest and much later for most.  Thursday is when the action really begins and for me it started off just right.

First thing I did was head over to Panera with Erik and Jaime for some breakfast and then we all went to a workshop entitled "Six Words, One Image: A Worship Arts Immersion."  While it wasn't exactly what I expected it to be and there was a point toward the beginning where it started to delve a little too much into essentially being a commercial for Starr King School for the Ministry, it turned out to be really, REALLY cool and actually really made me want to go to Starr King (at least for that moment in time).

The reason they talked so much about SKSM was that "Six Words, One Image" is actually a highly condensed version of an intensive program offered by SKSM.  The idea is to incorporate a daily spiritual creative practice into your life by combining six words with one image to tell a story.  The origins of the idea go back to a scene of Ernest Hemingway drinking at a bar.  Hemingway turned to the man next to him and said "I could write the perfect story in six words."  The man obviously doubted the idea that any story could be told in six words.  Hemingway responded: "For Sale: baby shoes.  Never worn."


The discussion then moved on to incorporating the arts into not only worship but congregational life.  They talked about the importance of sensuality, of engaging all the senses much in the same way a filmmaker does--and how as folks grow older, they begin to move away from sensuality in favor of rationality (and how this phenomenon has roots in our Protestant and Puritan forbears).  They also talked about being intentional about cultivating truly multivocal and truly multigenerational ministry.  Lots of great ideas and inspiration; a perfect way to kick off GA.

For lunch, Jeremy and I had a meeting with our Florida District Young Adult/Campus Ministry steering committee which was wonderful.  It's great to be able to sit down with all those amazing folks and discuss all the exciting ideas we have for the committee, such as the possibility of a District YA conference in Orlando, a Regional YA conference in New Orleans, and the logistics of developing a model that will translate to the regional level so that we can begin planting committees similar to ours in other districts that eventually will be supported by Regional YACM steering committees.

After lunch it was, befittingly, time for "Choose Compassionate Consumption: From Personal Choice to Collective Action."  I took a few good notes about the UU Service Committee's "Choosing Compassionate Consumption" program and learned about some resources, but the most exciting part of this workshop for me was talking to Saru Jayaraman afterwards.  I told her I would love to get her to come speak in Miami and she gave me her card and informed me that the restaurant workers organization she formed in 2001, the Restaurant Opportunities Center United (ROC), actually has an office in Miami.  I also talked to Kara Smith of the UUSC and got a business card from her as well, which was really awesome.  But last but certainly not least, I got Saru Jayaraman to sign my copy of "Behind the Kitchen Door" and got a picture taken with her: 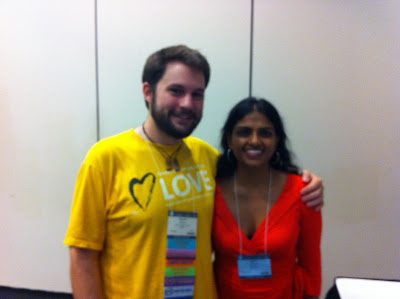 After that, it was on to "Beyond Contentment: Motivating Members to Do More."  If you know anything about UU congregations, I probably don't have to tell you how packed this workshop was.  Easily over 100 people in the room, many of whom had to sit on the floor because there weren't enough chairs.  There was just way, WAY too much great information in this workshop to discuss it all here but rest assured I will be sharing it with our congregation using a variety of avenues.  For now, I'll just leave you with the final image in the slideshow from this workshop: 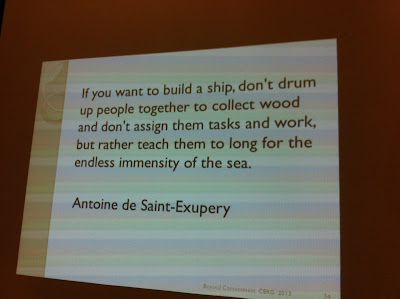 After the workshops for the day were through, it was time to worship and witness for climate justice.  There were many amazing speakers at the worship service who discussed the evils of mountaintop removal and the open air storage of coal ash that reduces the life expectancy of folks in the low-income neighborhoods where the ash is stored by about 10 years on average.  Mel Hoover gave an especially impassioned message and a plea to divest from fossil fuels (a position I immensely respect even if I don't entirely agree with it).  The "stars" of the show, of course, were renowned poet and Unitarian Universalist Wendell Berry, who shared some of his amazing poetry on the subject of climate justice, and "Bidder 70" himself, Tim DeChristopher (who is studying to become a UU minister!). 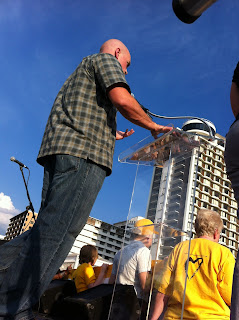 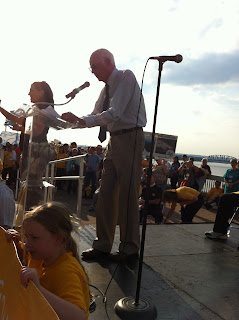 After the worship, we marched to The Belvedere for the witness event where many more amazing folks spoke, including Wendell Berry and Tim DeChristopher once again as well as Mel Hoover.  At one point, Jennifer Toth had me handing out vials of symbolic water symbolizing the waters of the Ohio River, which our witness event was looking out on and which marks the border between Kentucky and Indiana and is being polluted with more and more coal ash every day due to mountaintop removal.

After the witness event, I eventually found my way back to the hotel room, threw my Dwyane Wade Marquette jersey on over my Standing on the Side of Love shirt (the jersey is navy blue with yellow trim so it was a perfect combination!) and headed over to the Jockey Silks bar at the Galt House to watch the Heat game with Jennifer and UU Miami's own Chris Kirchner, as well as Terry and Mark from Miami/Ames, IA.  Unless you've been living under a rock, if you live in Miami, you know how the Finals turned out, so I'll just let the photos I took of the TV broadcast of the game speak for themselves...