By Vundablog July 03, 2014
I've trumpeted love for the best wrestling comic ever Headlocked before on this here Vundablog and I intend to trumpet it some more with a formal review of the Headlocked collected edition A single Step. 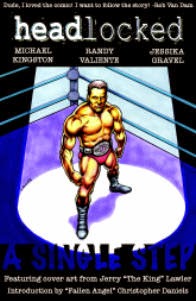 The first image of the story is the drip of blood into a puddle of blood, and the narrator asking if we've ever had a dream. Headlocked follows the life and career of Mike Hartmann a college dropout turned aspiring wrestler. Mike Hartmann is a former theater major so Mike Hartmann looks at wrestling from a dramatic perspective. He illuminates the subtleties of the performance known as wrestling. The book is very poetic in the way that it describes the story of a wrestling show and its performers. Mike Hartmann gets so enthralled from watching a live wrestling show he changes the course of his life and pursues his dream. In the collection we don't se much of Mike actually wrestling. It is as the title says "A Single Step" in his career, from leaving school to his first tryout. The art by Randy Valiente delivers the story in a raw and gritty way. The writing by Michael Kingston is beautiful, the story is enthralling, and inspires you to turn every page and makes you feel like your doing this career journey yourself. The creativity behind this awesome WFW wrestling roster is amazing. The covers by Jerry Lawler are impressive given his background, and I just wish he didn't make the wrestler on the cover look like John Cena. I would love to see this as an ongoing HBO series, but a TV show could never live up to the glory that is Headlocked the comic. I'm psyched to see Jerry Lawler and Michael Kingston at Florida Supercon and will be in attendance for the Headlocked panel. Hope to see you there.