Friday started with a very important Plenary session.  After a litany of reports from various committees and commissions and statements from (mostly unopposed) candidates for office, the Assembly finally got down to the business of passing a landmark Statement of Conscience: "Immigration as a Moral Issue."  The vote was quite swift, especially for something of this magnitude, and after incorporating a few small amendments, the 52nd General Assembly of the Unitarian Universalist Association of Congregations UNANIMOUSLY passed "Immigration as a Moral Issue."

At UU Miami, we're already beginning to take action on the statement by partnering with community members to begin an immigration detention center visitation program at the nearby Krome Processing Center.  "Friends of Miami-Dade Detainees" came out of a conference the UU Florida Southeast Cluster of congregations held on "Immigration and Mass Incarceration."  We featured prominent South Florida speakers such as Executive Director of South Florida Interfaith Worker Justice, Jeannette Smith, and President of Florida Rights Restoration Coalition, Desmond Meade.  We also had Christina Fialho, co-founder of Community Initiatives for Visiting Immigrants in Confinement (CIVIC), who not only came all the way from California to speak to us but actually came down the day before the conference and set up a tour of the Krome Processing Center to use as a sort of jumping off point for the visitation program.  Since then she has been working with us and others in the community on starting "Friends of Miami-Dade Detainees" and the progress we've been making has been very promising (including the possibility of the opportunity to make a presentation for Rep. Joe Garcia at his office and hopefully get a letter of endorsement from his office!).

After Plenary, had a little lunch and then it was time for "The Fifth Principle Task Force: It's Time!"  It was tough to skip out on several really cool-sounding workshops that were going on at the same time, but I knew how important this was.  The Fifth Principle Task Force was convened in 2006 to examine General Assembly and how it measured up in terms of living our Fifth Principle by affirming and promoting the democratic process.  As it turns out, General Assembly is not very democratic and not very representative either.

The task force produced a 13 page report which it presented to the 2009 General Assembly.  That report can be found HERE but the basic gist of it is that due to economic accessibility issues, less than 60% of UUA member congregations have been represented at GA in recent years and since 2001, the average delegate body of roughly 2,200 is less than 45% of all eligible delegates.  There is also substantial evidence that many delegates "participate in GA business with little or no guidance from or sense of accountability to their home congregation."

The next thing on the agenda was a Plenary in which the delegates split up into smaller groups in separate rooms and used Twitter to help re-imagine GA and help the Fifth Principle Task Force collect ideas on how to improve it.  Delegates were asked to answer the following three questions:

The tweets from these sessions can be found by searching Twitter for #newuuga.  Or you can just CLICK HERE.

I, however, had to skip out on this session--but don't worry, I had a very good reason. I was invited to a reception in UUA President Rev. Peter Morales's suite at the Marriott to take part in a conversation with Eboo Patel among Campus Ministry leaders within our faith. What an incredibly humbling and inspiring thing to be part of! Eboo Patel is an extraordinary young man with an incredible passion for hearing and telling stories and for finding our sacred common ground through interfaith work. 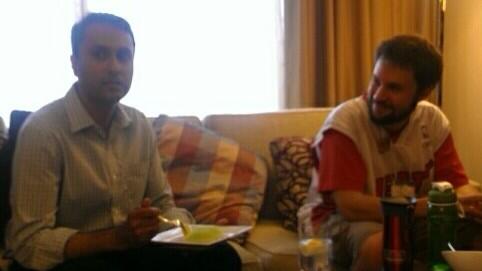 After our conversation with Eboo, it was time for his Ware Lecture.  For those who did not see it, it was really something, and I HIGHLY recommend going back and watching it on the UUA website.  The video can be found HERE.  One of the highlights (which we also discussed in our conversation beforehand) was when he said to us that we UUs do two things in terms of educating our youth on interfaith work--one of them we do very well and the other, not so much.  We're very, very good at educating our young people about other religious and cultural traditions and fostering cultural competencies in them.  However, we're really bad at teaching them how to connect those traditions back to their own faith tradition and how to articulate their own faith and their own culture to others.  It is truly not to be missed. 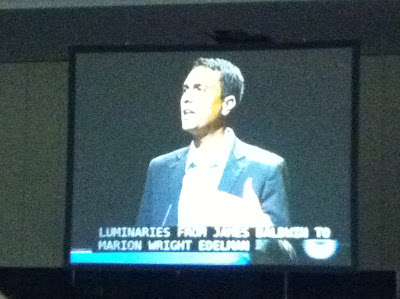 Sadly, an unfortunate incident followed the Ware Lecture.  Immediately after Eboo Patel had finished his lecture, over 700 of the 2000 people in the Plenary Hall formed a huge line to get out the door right as the Synergy Bridging Worship was beginning.  Many folks took to Twitter to either voice their frustration about this mass migration or to defend themselves for leaving early, leading to a lot of tension and hurt feelings and many a report to the GA Right Relationship Team.  Many issues led to this problem: a scheduling faux pas, seemingly designed to keep people from leaving before Synergy, lack of childcare options later in the day, many folks complained of being too tired to stay up past 8:30pm, and the list goes on.  At the end of the day, though, the Youth had an absolute blast, more people showed up for Synergy than usually do (over 1200), and the service was beautiful and inspiring.  We're all so proud of all our amazing youth and we really must take every opportunity we possibly can to lift up the amazing things they do and are.  All things considered, a beautiful end to a beautiful Friday...