SATURDAY started off inauspiciously with me (and not Jeremy) being woken up several times in the 6:00 am hour by Jeremy's cell phone alarm.  I tried putting the damn thing next to his head and he still wouldn't wake up.  Eventually I decided since I was up anyway, I'd go to Morning Worship.  It was alright, the content was interesting but overall I found it to be pretty uninspired.  The best part was making quiet conversation with Greg and becoming Twitter buddies.

After worship was Plenary, which included selection of potential Actions of Immediate Witness by voting to put 3 of the 6 proposed AIWs on the agenda, the Board of Trustees report and statements from the candidates for the Board, and debate and vote on bylaws amendments enabling regions.

After lunch, Raziq, Jeremy, Erik, and I hung out in the Exhibit Hall and talked some more with Connie, who is a UUA Congregational Life Consultant, which was quite interesting.  We also took a few minutes to vote in the elections while we were there.  Sadly, our candidate of choice for UUA moderator fell 40 votes short but Jim Key is a great guy so I'm not too concerned.

Later, I attended the workshop "Building the Movement to End the New Jim Crow" which actually lived up to its name more than I expected.  There was a particularly good presentation from one UU minister who was leading efforts in his congregation to partner with grade schools in at-risk communities to keep the kids out of the school-to-prison pipeline that seems to be growing every day.  Another initiative I really want to look into is the "Ban the Box" movement to get companies to stop forcing applicants to disclose that they're a former felon on their job application. 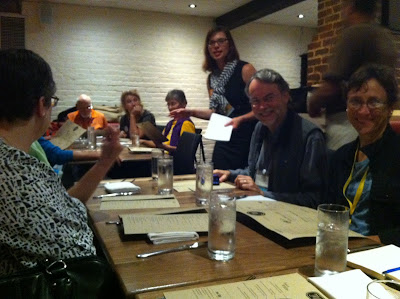 For dinner Saturday night, Jennifer Toth got a bunch of congregational leaders from Florida together at a fine restaurant called the Milkwood to network and exchange ideas and information on immigration issues and what folks are doing.  I got a lot of interest from folks regarding CIVIC and the visitation program our congregation is setting up and Jeremy also brought up the issue of human trafficking and how it relates to immigration issues.  We also discussed strategies for pressuring our respective representatives in the House to pass immigration reform.  Very awesome dinner with some delicious food and amazing service to boot. 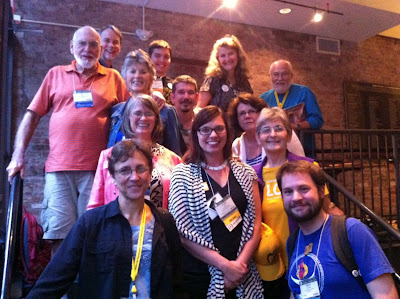 After dinner, I went to check out the Service of the Living Tradition for a few minutes but what I was there for wasn't really doing it for me so I decided to join a whole bunch of young adults at a table at BBC for more awesome conversation.  After a few hours, I started getting sleepy so I wandered back to the hotel and basically passed out talking Israel/Palestine with Erik. 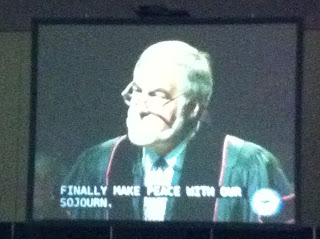 SUNDAY finally rolled around and it was time for the highly anticipated Sunday Morning Worship featuring a sermon from Rev. Dr. Bill Schulz, President and CEO of the Unitarian Universalist Service Committee.  The service was phenomenal, as expected, and Rev. Schulz made a rousing call to consider the vastness of the universe and the utter insignificance and incredible significance of our place in it.

After that, most of the rest of the day was spent with Jeremy, Lincoln, Erik, and I discussing the virtues of revolution v. reform for hours.  After that, we all slipped in for the end of the final Plenary so I could say my heartfelt and bittersweet goodbyes to everyone I could get my arms around and just like that, I was in a cab and off to Miami via Charlotte.

I've always had a love/hate relationship with my home city but when I fly into Miami at night, it's hard to remember why I hate it--although stepping off the plane into 120% humidity usually does the trick.  In the spirit of this temporary revelatory love of my city, I thought, since I've been sharing my stories of Heat Finals games, might as well close out the way I closed out my week...