I suppose, if nothing else, this blog is, for all of us, a den of nerd--a vessel with which to share our deepest, most passionately nerdgasmic excitement over (mostly) relatively benign minutiae.  I felt it was my duty, therefore, to share with the world one of my most basic foundations of my nerdiness--my love of music.  Specifically, my Top 25 Bands of All Time.  You'll notice I'm not referring to them as my "favorite" bands because this list is about a little bit more than just what I enjoy listening to.  I've made dozens of lists of my favorite bands or "top" bands but I never felt satisfied with any list based merely on my gut and so I decided to devise a formula (as nerds are oft prone to do) that factored in everything I wanted this particular list to be all about. 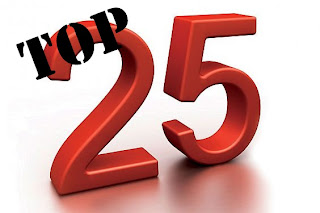 What I basically did was I took a list of 25 bands and artists (with one thrown in to reflect something I'm currently listening to a LOT of which has the potential for a spot on the list) that seemed like legitimate candidates for "all time great" status for me personally.  Then I ranked each band/artist in each of six separate categories in order to come up with a score (out of 25) in each category for each band.  The six categories are:
-Overall Positive Output -- the overall volume and quality of all the albums and songs by this band/artist which I enjoy (without any consideration for material by the band/artist which I dislike)
-Overall Enjoyment -- how often and how much I enjoy this band/artist
-Good Output v. Bad Output -- the ratio of good output to bad output, how good the good stuff is and how bad the bad stuff is (worst album is "dropped"; everyone's allowed one)
-Popular Appeal -- underground and mainstream popularity, level of critical appeal, staying power
-Best Album -- how good is their best (according to me) album?
-Mixtape Factor -- how good is one 80 minute CD of their best (according to me) songs?

Unfortunately, bands/artists get points off for the material of theirs I haven't heard yet, but this is my list after all and it's always evolving.

Today's entry will be a little different from the rest of them not only because of the introduction to the formula but also because the artist I'll be covering in this particular entry is the one I threw in to represent a band/artist I'm listening to a lot of at the moment.  The reason it will be different is because I didn't rank this band/artist using any of the above categories.  For the Top 25, I will be analyzing each album using each of the six categories and sharing the scores they received in each. However, for this entry, I have no scores, just a few words about how great Marilyn Manson is.

One of the main reasons I wouldn't be able to put Manson in the Top 25 at this time is that "Holy Wood" and "The Golden Age of Grotesque" always struck me as kind of weak and although some of the newer stuff he's released seems better, I haven't really listened to it enough to draw a conclusion.  However, everything prior to that ranges from "pretty good" to "defining moment in 90s music."

In the past, I never really got into "Smells Like Children" so when I finally did, I was surprised to find out that it was mostly remixes and weird interludes plus the classic "Sweet Dreams" cover that launched Manson's career on MTV prior to the epic "Antichrist Superstar."  I usually hate remixes but this are actually done in a pretty interesting way--the term "remix" almost seems inadequate as the songs are more "re-imagined" than anything.

"Portrait of an American Family" is the album the remixed songs come from.  This is another album I didn't get too into in the past but recently have gotten a lot more into.  There are some great hook-driven heavy rock songs with great lyrics on this album--namely the singles "Lunchbox", "Get Your Gunn", and "Dope Hat."  The Willy Wonka styled video for "Dope Hat" is probably one of my favorite Manson videos.  Truly disturbing.

"Antichrist Superstar" pretty much cemented Manson's status as the scariest dude in the music business.  Kind of a shame, considering it is also one of the most brilliantly conceived and executed pieces of alternative industrial metal concept art.  I've been listening to this album a lot lately and kind of rediscovering just how damn good it is.  Almost in the same way that Nirvana combined roaring guitars with pop hooks, "Antichrist Superstar" (perhaps more impressively) weaves pop sensibilities into everything it does, no matter how heavy it gets.  Even as he screams "FUCK IIIIITTT!!!" over buzz saw guitar riffing in the chaotic opener "Irresponsible Hate Anthem", the guitar riff is still quite catchy and the "FUCK IT!" chorus is very memorable--as is the other half of the chorus: "Everybody's someone else's nigger.  I know you are, so am I.  I wasn't born with enough middle fingers.  I don't need to choose a side."

The concept of the album itself influences the energy and the atmosphere of it.  In depicting the "beautiful people" that rule (in a fascist manner) over the disgusting masses.  "The weak ones are there to justify the strong" it says.  However, in depicting the masses and the main character who lives among them ("Little Horn" - a worm who metamorphoses into a boy and eventually into a rock star living among the beautiful people and ruling over the masses) the mood changes.  Songs like "Dried Up, Tied Up, and Dead to the World" and "Tourniquet" writhe with creepiness and then in the song "Little Horn": "Little Horn is born!"

The ultra-creepy combo of the industrial interlude "Cryptorchild" and the almost-dancey "Deformography" seem to mark the transition from worm to boy to rockstar.  In "Mister Superstar", Little Horn begins lashing out in anger at his adoring subjects and eventually the tone of the album turns overtly fascistic in the title track, complete with what sounds eerily like a sound clip of a Nazi "heil" (which sounds cooler and heavier than I really would like to admit).  By the time brilliantly creepy, crushingly heavy, yet undeniably catchy "The Reflecting God" rolls around he's openly inviting people to kill him ("SHOOT!  SHOOT!  SHOOT MOTHERFUCKER!") and if the video for the beautifully somber "Man That You Fear" is any indication, Little Horn gets his wish in the end.  There is also live footage on the "God is in the TV" video where Manson has a guy dressed like a cop come out with a shotgun and blow him away.

Once I took "Antichrist Superstar" off of constant repeat, I started rediscovering "Mechanical Animals" a bit and I really have to say that it's a highly underrated album.  It's obviously quite easy to imagine why it was viewed as a disappointment as the highly awaited follow-up to "Antichrist Superstar" but when you think about it, it takes some serious balls to release something that sounds like this after releasing something that sounds like that.  It also helps to know a little bit about the concept for this album.

The concept of "Mechanical Animals" is really quite interesting.  Half of the songs are said to be written by Alpha (a character based on Manson himself) while the other half are written by a band called Omēga (pronounced oh-mee-gah) and the Mechanical Animals.  Omēga is a gender ambiguous alien who, like Bowie's Ziggy Stardust, falls to earth and is captured and force to play with a band called The Mechanical Animals (this character is depicted in the music video for "The Dope Show").  The songs written from the perspective of Omēga are typically the most nihilistic and superficial lyrically (mostly about sex and drug use) and generally the most decadent and poppy sounding songs--they are: "The Dope Show", "Rock is Dead", "I Want to Disappear", "I Don't Like the Drugs (But the Drugs Like Me)", "New Model No. 15", "User Friendly", and "Fundamentally Loathesome").  Alpha's songs are more about love and alienation.

There's definite potential for Manson to move up onto the list--#25 Porcupine Tree is a very recent addition and could easily get knocked off in the near future by a band I've been listening to since high school.  I never got too into "Holy Wood" or "Golden Age of the Grotesque" although I've been trying to rediscover them recently.  GAOTG still seems pretty mediocre but I'm starting to get into the concept and some of the songs on "Holy Wood."  I definitely need to give some more attention to "Eat Me, Drink Me", "The High End of Low", and "Born Villain" but until then there is, sadly, no spot on the list for Marilyn Manson.  Still, he's all I've been listening to for the last couple weeks and so we celebrate him with one of the creepiest music videos ever made..."The Beautiful People"...