This past Saturday, I was privileged enough to attend the WORLD PREMIERE of a movie at the Miami International Film Festival entitled "Viva Cuba Libre: Rap is War."  The film follows Cuban activist hip hop duo Los Aldeanos as they struggle to spread their revolutionary music and message throughout the island country from the capital city of Havana--hometown of both members of Los Aldeanos--to the remote rural areas like Holguín--where two brothers were beaten and arrested for listening to Los Aldeanos.  The film was also preceded by a short film entitled "Lost Country" which documents the ideological roots that took hold during the Cuban Revolution of 1959 and Fidel Castro's subsequent rise to power.

Los Aldeanos (roughly translated as "The Villagers") is Bian Óscar Rodríguez Gala ("El B") and Aldo Roberto Rodríguez Baquero ("El Aldeano").  The two met at a party one night in 2003 where they began exchanging rhymes and the next day they had already written their first song together.  The music of Los Aldeanos is deeply and viciously critical of the Cuban government and littered with striking images of and metaphors for the social, political, and economic realities of the Cuban people.  As a result, they are often persecuted by the highly repressive Cuban government, as are their fans--in fact, much of the movie had to be shot using hidden cameras and mobile devices in order to hide from authorities.  It is extremely difficult for them to play live; often they can only play when another group invites them on stage at their shows and even then they usually can only play one song (if any) before the authorities pull the plug.  Bian and Aldo both live in poverty despite being one of the most popular musical groups in Cuba (as well as garnering widespread international popularity) because it is nearly impossible for them to distribute their music; the only way they can distribute their songs is by handing out free burned CDs on the streets. 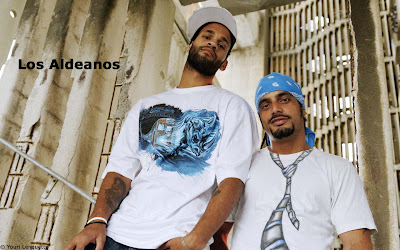 On Christmas Day 2010, brothers Antonio Michel and Marcos Maiquel Lima Cruz were celebrating on the porch of their home in Holguín, playing the music of Los Aldeanos and singing along with it while waving a Cuban flag.  Not long after, authorities showed up at their house.  According to the Cruz brothers' mother, the authorities kicked their door in, dragged the two brothers along with their mother and father out into the street, beat them and taunted them, vandalized the front of their house, and then arrested the two boys.  "Following a trial, Antonio Michel was sentenced to two years in prison and Marcos Maiquel to three," according to Amnesty International.[1]

During the filming of "Viva Cuba Libre", Los Aldeanos made a point to travel to Holguín to visit the brothers in jail and then later traveled to their home to visit their parents and speak with them--and during this visit, actually ended up writing a song about the imprisoned brothers.  The other thing that happened during this visit was that as word got around of the presence of Los Aldeanos in the neighborhood, people began streaming in, surrounding the house and asking Los Aldeanos to perform.  When police attempted to break up the mob, a melee ensued that ended up with reports of about 80 people arrested (out of a crowd of roughly 1,500).  The Cruz brothers' parents were (again) reportedly beaten during the melee.[2]

The movie is incredibly moving and passionate, featuring a lot of music video footage of Los Aldeanos with subtitles.  I know a lot is lost in the translation but even in English, the power and beauty and passion of their words shines through incredibly.  It features plenty of footage of interviews with Bian and Aldo as well as footage of them and the filmmakers talking to fans of the duo--footage that paints a painfully vivid picture of the repressive state of Cuba as many citizens are very afraid of speaking on the topic of Los Aldeanos and their message and there are even moments when people are identified as undercover police.  It also features footage of an incredibly emotional interview with the mother of the Cruz brothers that eventually sees her break down and cry because she is so afraid of what may happen to her boys in jail.

The movie builds to a poignant climax at the end when Aldo travels to the outskirts of the island to play a show while Bian must stay behind and tend to his pregnant wife who is in danger of miscarrying.  They travel by bus with a member of state security on board monitoring the trip (in one scene he warns the "cameraman" not to be too liberal with his filming, in so many words).

On the way to the show, they stop in a small town to eat and Aldo insists on traveling deeper into town, beyond the facade that is shown for tourists, to where the real people live.  They received prior warning that if they did this, they would be robbed, but what they found was basically a shanty town made up of people living in shacks made of sticks, cardboard, and whatever they can find in the garbage.  One lady they meet brings forth several small children and explains that they have been orphaned and she now takes care of them because their mother was forced into prostitution to feed them and was subsequently arrested.  After she tells this heartbreaking story, the youngest of the children (no more than 5-6  years old) looks directly into the camera and sobs that he wants them to let his mom go.  As the crew leaves the village, one of the residents exclaims: "You haven't seen anything.  Go to the other side of the hill.  Then you will be the one crying." (paraphrased)

Upon reembarking onto the bus, it becomes apparent that the state security official is very unhappy with the actions of the crew and angrily directs the bus driver to drive to the nearest police station so that he can book them for "indiscipline."  Amazingly, the footage survives the ordeal and the movie simply picks up as the crew and Aldo are being released from jail.

As they arrive in town for the show, Bian calls them to let them know that his wife is doing much better and he'll be able to make the show after all.  When the group arrives, they are told that the organizers of the show were only able to procure a venue that could accommodate 350 people for a show that would likely draw thousands.  Aldo scolds the promoter who responds that you need to get permits for shows like this much further in advance.  Aldo's response: "Permits?!  Are you kidding me, man?!"  Thankfully, the authorities eventually cave and grant the group the biggest venue in town.

After the show, Bian returns the the hospital where his wife has been giving birth to find a beautiful baby boy waiting for him.  He muses in a later interview that he just wants for his son to be able to achieve anything he wants in life and to have the kind of control over his destiny that few Cubans are afforded today.

I really, REALLY wish I had access to some of the phenomenal music video footage with subtitles that was included in the film but I'm sure that footage won't be available for quite some time.  In the mean time I was able to find a YouTube clip of a song entitled "A Veces Sueño" ("Sometimes I Dream") with an English translation of the lyrics.  It's pretty tame compared to some of their other songs but still a phenomenal song:


For those reading this who DO speak Spanish, here is another excellent song entitled "Viva Cuba Libre":


And finally, here is some really fascinating footage of Los Aldeanos playing live in Miami in 2010 overdubbed with another of their songs (footage courtesy of Miami New Times):