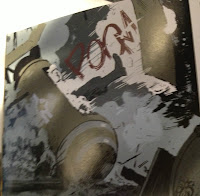 I don't pick up too many Darkhorse comics at the moment, but I will always give a chance to a new Mike Mignola comic. Sledge-Hammer 44 #1 is a World War 2 comic that could be boiled down to robot vs. Nazi robot. In this first issue there isn't much dialogue for the titular character of Sledge-Hammer. He basically gets dropped in to a battlefield hidden in a bomb. He fries some Nazi's with some electrical bolts, kicks some ass, then gets bested by an even bigger more retro looking Nazi-robot, and then gets saved by his back up, a platoon of American soldiers.

Thus far the 2 issue mini is pretty cool introduction to a new character. I assume he's a part of the Hellboy universe considering the art style, and the fact that the letters section is Hellmail and it is clearly set before the birth of Hellboy who doesn't arrive till the end of the war. And in the Hellmail section of the Hellboy in Hell issue I'm reviewing next they explain that the Sledge-Hammer robot is actually a robot Lobster Johnson fought called an Iron Prometheus. Which means I have to keep my eyes peeled now in back issue bins for Lobster Johnson issues or his back-ups in my old Hellboy comics. The art by Jason Latour is superb and emulates Mignola's art perfectly. 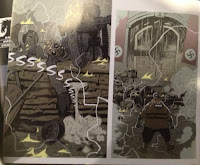 The colors by Dave Stewart both help to sell the period but are used gracefully to give exposition, in subtle ways suggesting time of day and character emotion. Dave Stewart is a bad ass colorist his work on the Umbrella Aacademy, hwich I highly recommend. That's the great thing about comics Mike Mignola is involved with, they always feel like genuine pieces of art and not just commercial fodder. The character interactions written by  Mignola and John Arcudi for the platoon is fun and sets the quasi-serious tone of the book. Sledge-Hammer's design is clean and unique, and also feels practical and plausible for the universe and time period.  I wonder how far it's changed from it's original Lobster Johnson design. I highly recommend this book and hope you'll give it a chance if it comes across your path. 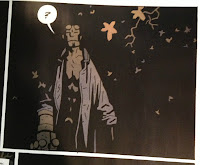 Hellboy in Hell #4 is a great read. With art by the modern comic-book legend himself Mike Mignola. Mignola has not lost a step in his art and story on this comic. I've enjoyed the last four issues despite being semi-confused at every turn. Which is usually the case whenever I've read Mignola's comics, however when Mignola confuses me I enjoy it because it feels like the kind of confusion only good ART can deliver. These Hellboy comics always manage to make their blacks and darkness look one thousand times darker than the black in a DC or Marvel comic, and it totally helps build the mystery and sell the realism of all the dark and creepy monsters Mignola introduces to us. Mignola makes you feel smart for reading a comics that doesn't asterisk you to some garbage comic, but to literary classics like Paradise Lost, or MacBeth. Hellboy in Hell is a classy affair. This issue we get major bits of back story for the Enagmatic character of Edward Gray. I love Hellboy in Hell and I can't wait for issue 5 to hit Mac's my local comics haven.
comic book comic books darkhorse darkhorse comics hellboy hellmail mike mignola REVIEW sledge-hammer 44 stephen escudero