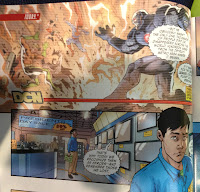 I enjoyed the heck out of Vibe #1. To be honest, I'm a huge Geoff Johns fan, and have recently realized I'm apparently also a fan of Andrew Kreisberg. I enjoyed Andrew's work on Green Arrow/ Black Canary where he introduced a pretty cool villainess named Cupid. Here Kreisberg and Geoff are trying to reinvigorate the most wacky character of the Justice League Detroit crew of the 70's (for more info on that check out comics 101 here). I also have dug his work on Mission Hill, Eli Stone, The Simpsons, and Justice League to name a few. The writers embrace the wacky world of Vibe and set the book in modern day Detroit.

The book ties in with the first storyline of the new 52's Justice League when they stopped an incursion by Darkseid into their world. Vibe was born from this event. Being caught in the blast of a boom tube granted him with special gifts and abilities which make him uniquely suited to finding and stopping Darkseid's threats. This book was so good it inspired me to go out and by the hardcover of Justice League volume 1 of the new 52 (which I will review further down the road). 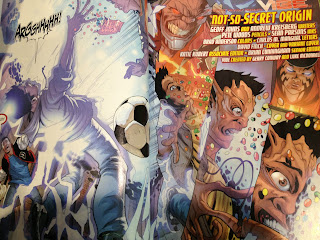 The writers handle the Hispanic leads perfectly and honestly. Vibe's costume still looks kinda dorky but maybe after a couple more bad ass moments his colors may start to look cool. The cover by David Finch is gorgeous and emphasizes the fun, cool feel of the book quite well. The pencil work by Pete Woods is evocative of Jim Lee's original art for Justice League. However, Woods may be better than Lee at delivering very interesting angles to tell the story through. 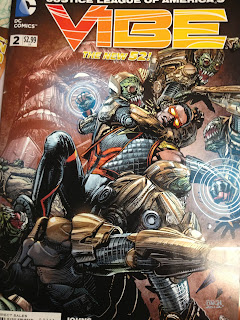 The inks by Sean Parsons are vibrant when they need to be and not too overly stylized as to slow down the story. The letters by Carlos M. Mangual aren't distracting, and I like the way he uses them in conjunction with the art so that it really feels like a thought out special effect. For example, he portrays gunfire noises as erupting like bullets from the gun. 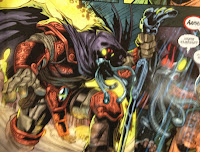 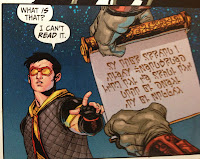 I like this book a whole lot and was eagerly anticipating issue #2. However, I was not thrilled with the cover and I am a tad annoyed at how different Vibe looks on the cover than in the actual book. His haircut and skin tone are drastically different. Also the scene of him battling several para-demons doesn't actually happen in the issue. The book's battle comes from some sort of mysterious dimension-hopping creature with a really interesting look who

is delivering a message shrouded in mystery. Agent Gunn delivers the mysterious alien message to a Gypsy who was teased in issue #1 and her first bits of dialogue and the exchange was less than awesome compared to the last book. The writing for Agent Gunn of A.R.G.U.S. makes the character feel flat and kind of awkwardly interjected into the story to get it moving a long. It's all too simple of plot and it has the dullness of the Ultimates where you're watching some guy recruit superheroes and it is as boring as a job interview. 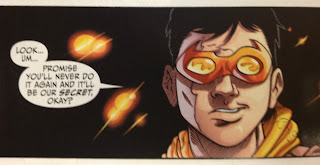 The art by Pete Woods and Andres Guinaldo is great. I am a bit miffed at his goggle mask design cause it looks identical to the one in current use by Green Arrow and also because of his hair color, at some times it makes him look like Robin.  I also enjoy the interplay among Cisco and his family and the way they interact. It's believable and helps serve the story dramatically  I like the tease for the next issue which will pit Vibe against Kid Flash, and may turn Vibe into a super-speedster character.