By Vundablog May 13, 2014
On Free ComicBook Day I picked up Bongo Comics Free For All aka the Simpsons comic. So I thought even though it's not Thursday yet we'll talk some Simpsons. First of all the cover is full of all sorts of awesome. It depicts Bart and his school chums running to a leprechaun's pot of gold full of comics. The comics have awesome names like Biclops, Superior Squad, Space Mutant Chronicles, Weasel Woman, Captain Squid, Radioactive Ape, House of Plasmo, Lil Kneesocks, True Larva, Leopard Lady, Quest Time, and more. There are leprechauns guarding the comics pot and one of them bears a striking resemblance to Comicbook guy. 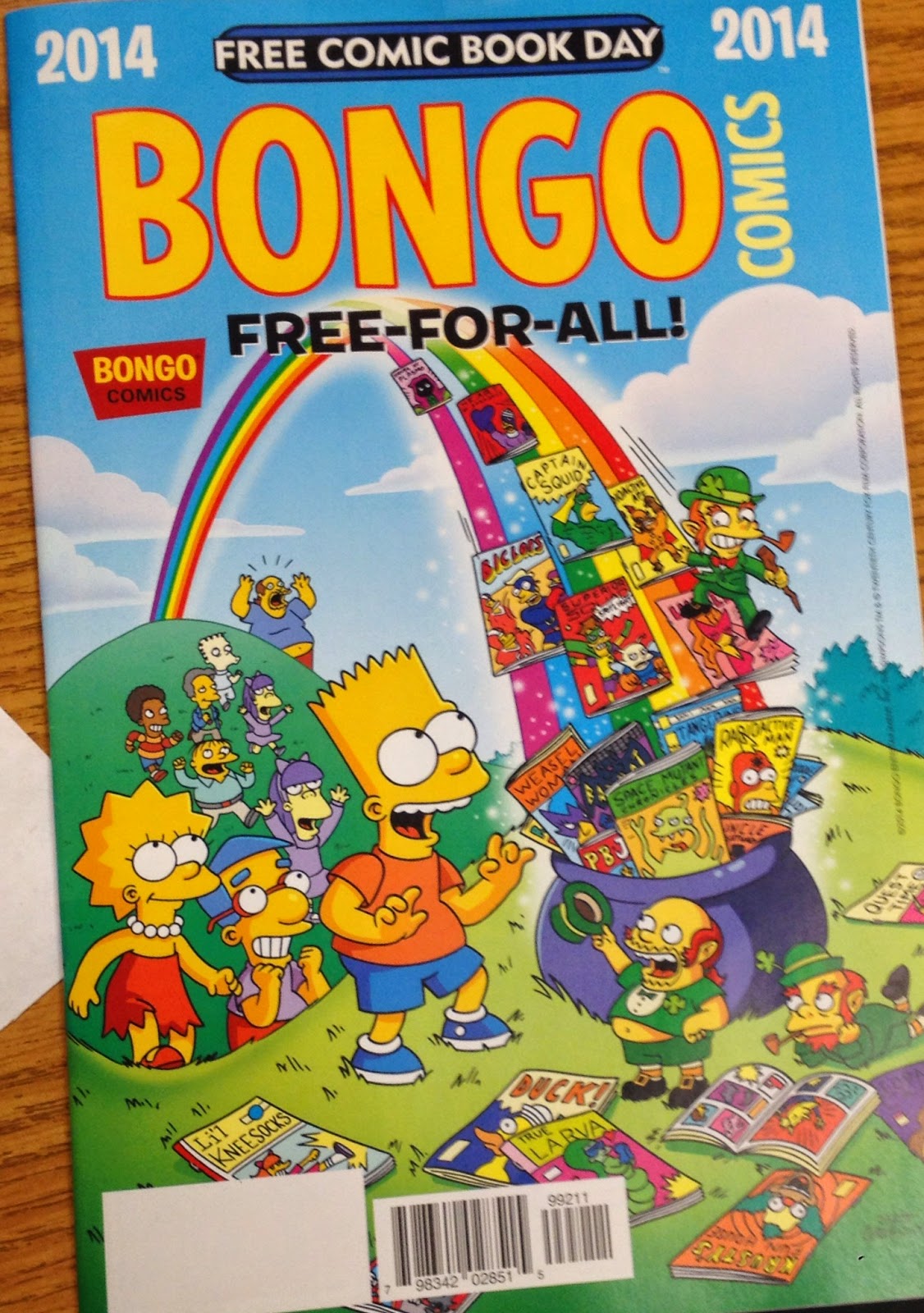 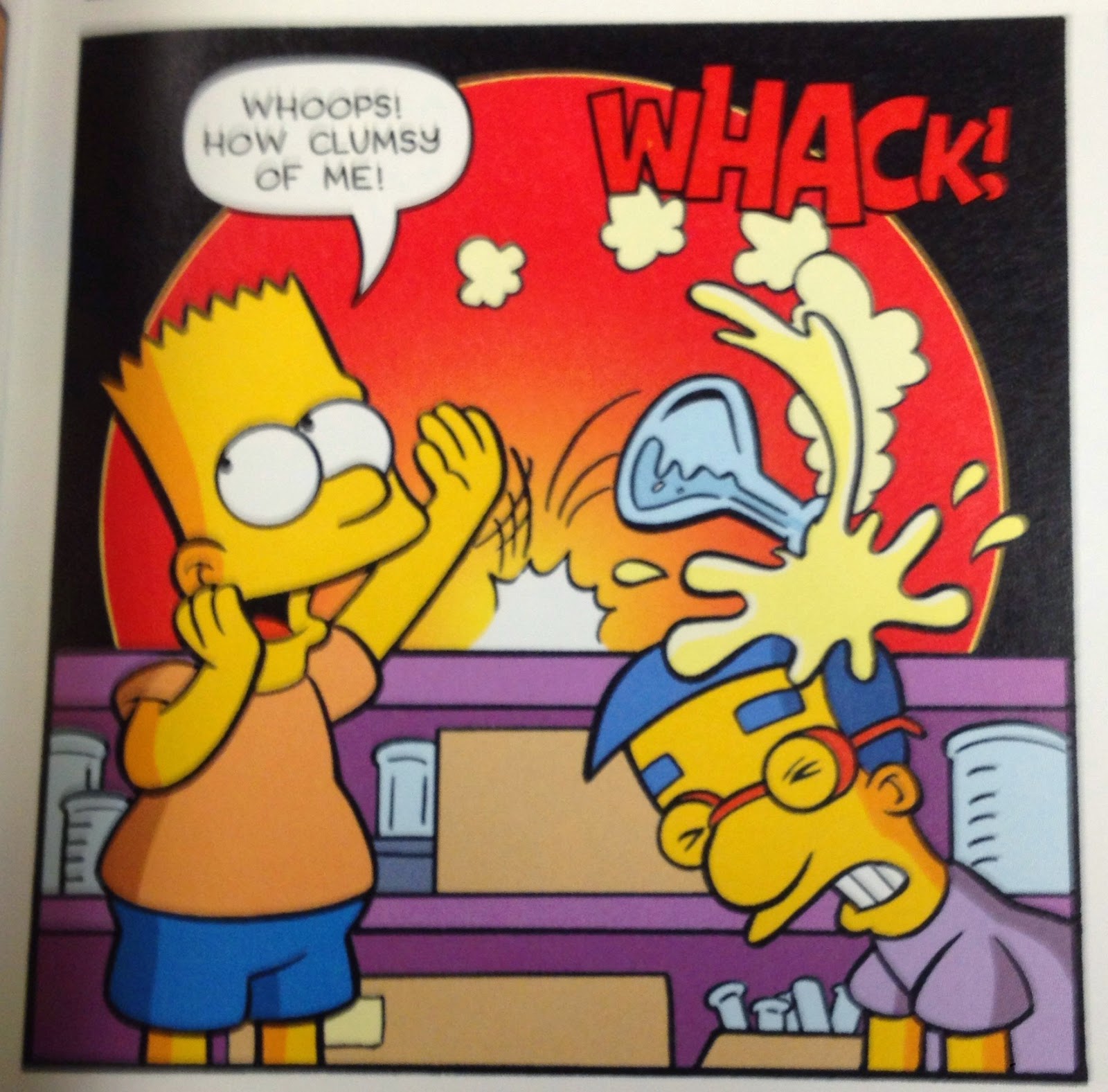 The first story in this free Simpsons anthology follows Bart and Milhouse as they attempt to get super powers. Milhouse is experimented on by Bart as they explore the accidental ways super heroes get their powers ala Spider-man and the Fantastic Four. Milhouse takes a beating in this short but it's okay because he's just Milhouse. 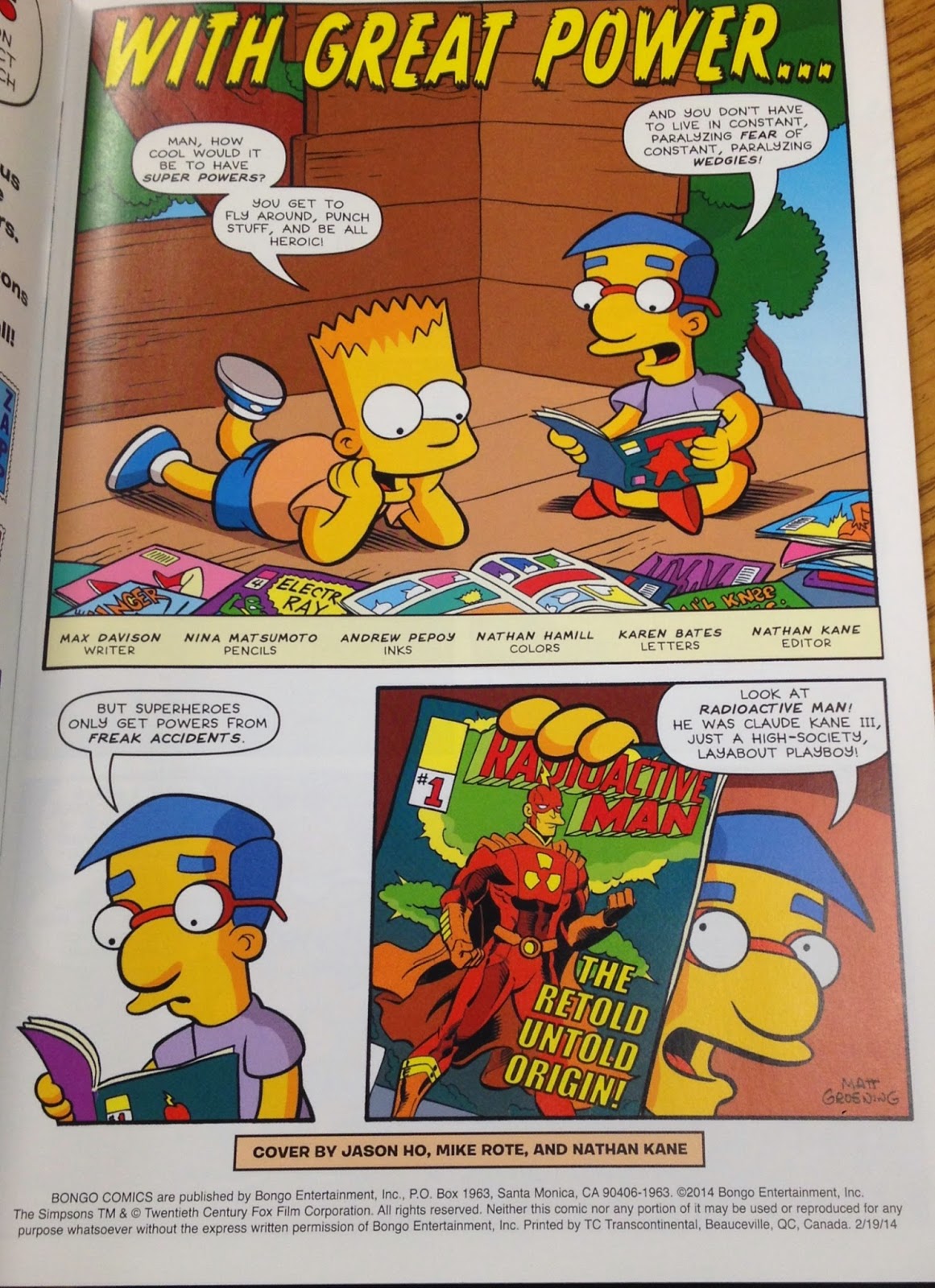 Then the comic gives you a two page Itchy and Scratchy short that doesn't need a single word to tell it's story. It parodies mad magazine's Spy vs. Spy. Then we're onto an awesome six page Mr. Burns story. Burns is looking for Smithers who has disappeared. 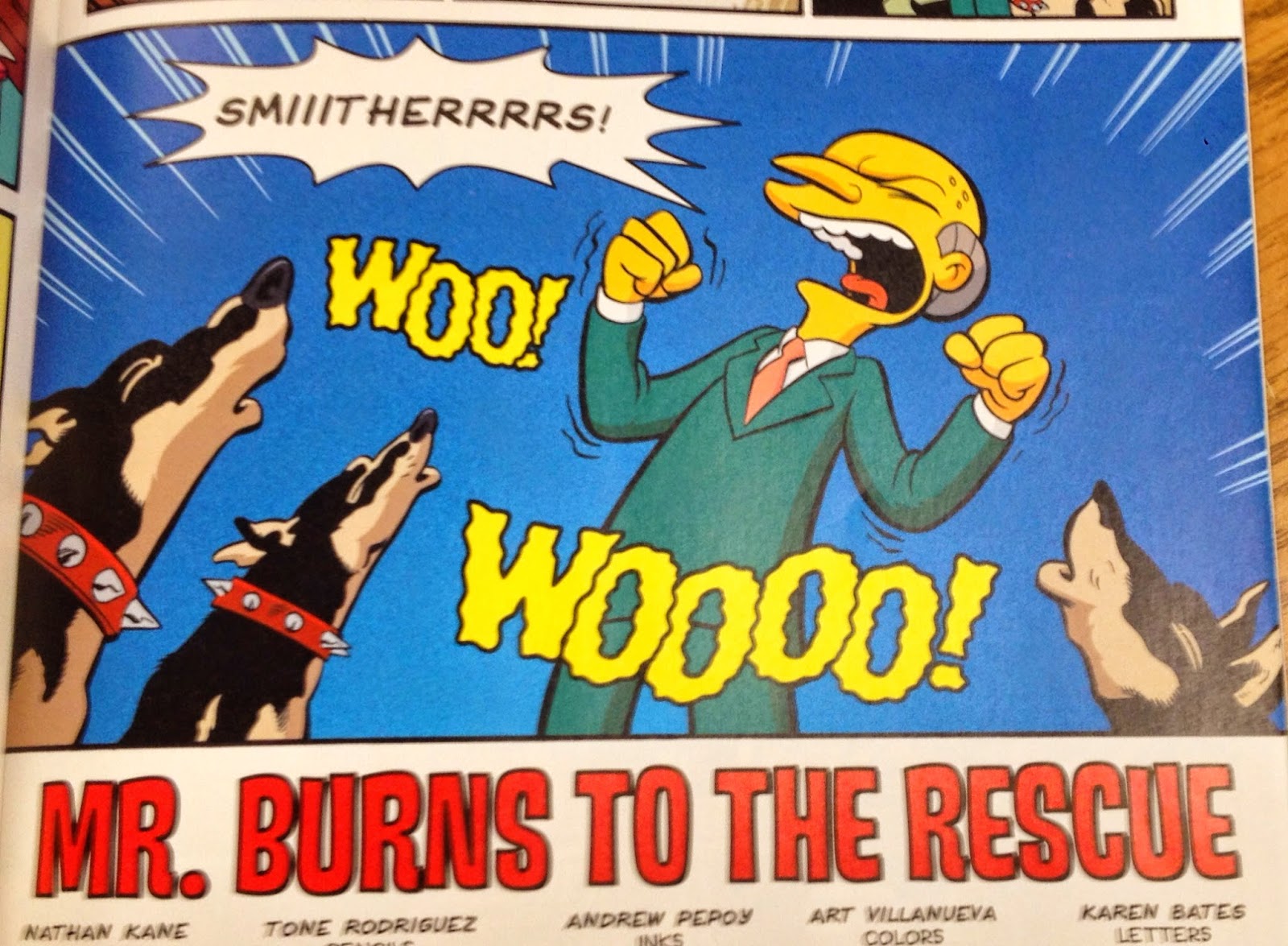 The writer Nathan Kane does an excellent job using the Montgomery Burns vernacular using words like "botheration","scullion","castigation", "lackwit", "kerfluffle", etc. Burns remembers he sent Smithers on a mission to get a left handed bacon-stretcher. Burns follows in Smithers's footsteps through his basement to find the left handed bacon-stretcher and Smithers. Their are lots of good pop culture references in this story and I dug it the most out of all the ones in this little collection. 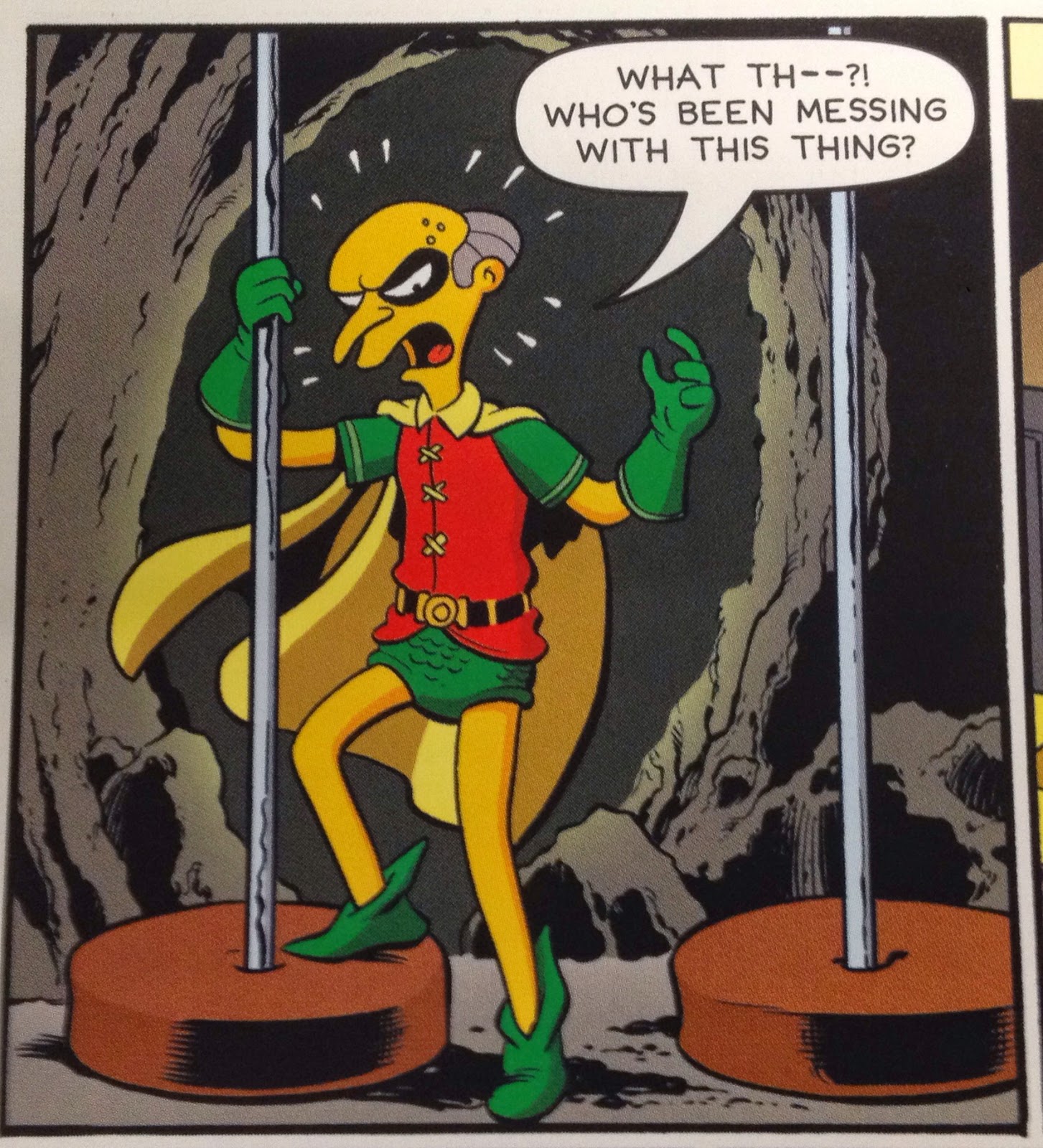 There's another two page story where Bart and Milhouse imagine their Krusty Burger fast food being made by monkeys. The two pager was stylish and simple, but didn't really connect with me. Last but certainly not least is a nine page story featuring everyone's favorite mad scientist Professor Frink. The story is called Synchronicity For Two and is written by Nathan Kane, penciled by John Delaney, inks by Andrew Pepoy, colors by Nathan Hamill, and letters by Karen Bates. The anthology finishes strong with this story about Professor Frink who's teaching Bart's class about quantum mechanics i.e. parallel universes. Martin points out that his comicbook hero Plasmo the Mystic hops between realities using magic. Frink scoffs and laughs at the possibility of magic. Until Bart touches the machine Frink brought and transports them to a magical universe.

Where it turns out Plasmo the Mystic resides.Their's a nice twist at the end with Plasmo's secret identity and the story is a lot of fun. On the last page is an awesome Where's Waldo-esque picture asking the reader to find the Ralph Wiggum in the middle of a prison riot(I found Ralph fairly easily). This Simpsons comic experience has been quite enjoyable and has inspired me to pick up a Simpsons comic or two sometime this year when I'm feeling peckish.