After a hard day's work mowing the lawn (well, not really), Ned invites Homer to his "Rumpus Room" for a beer but Homer storms off, accusing Ned of "rubbing his nose" in the fact that Ned's "family is better than" Homer's family, Ned's "beer comes from farther away than" Homer's beer, Ned and his sons "like each other," and Ned's "wife's butt is higher than [Homer's] wife's butt." 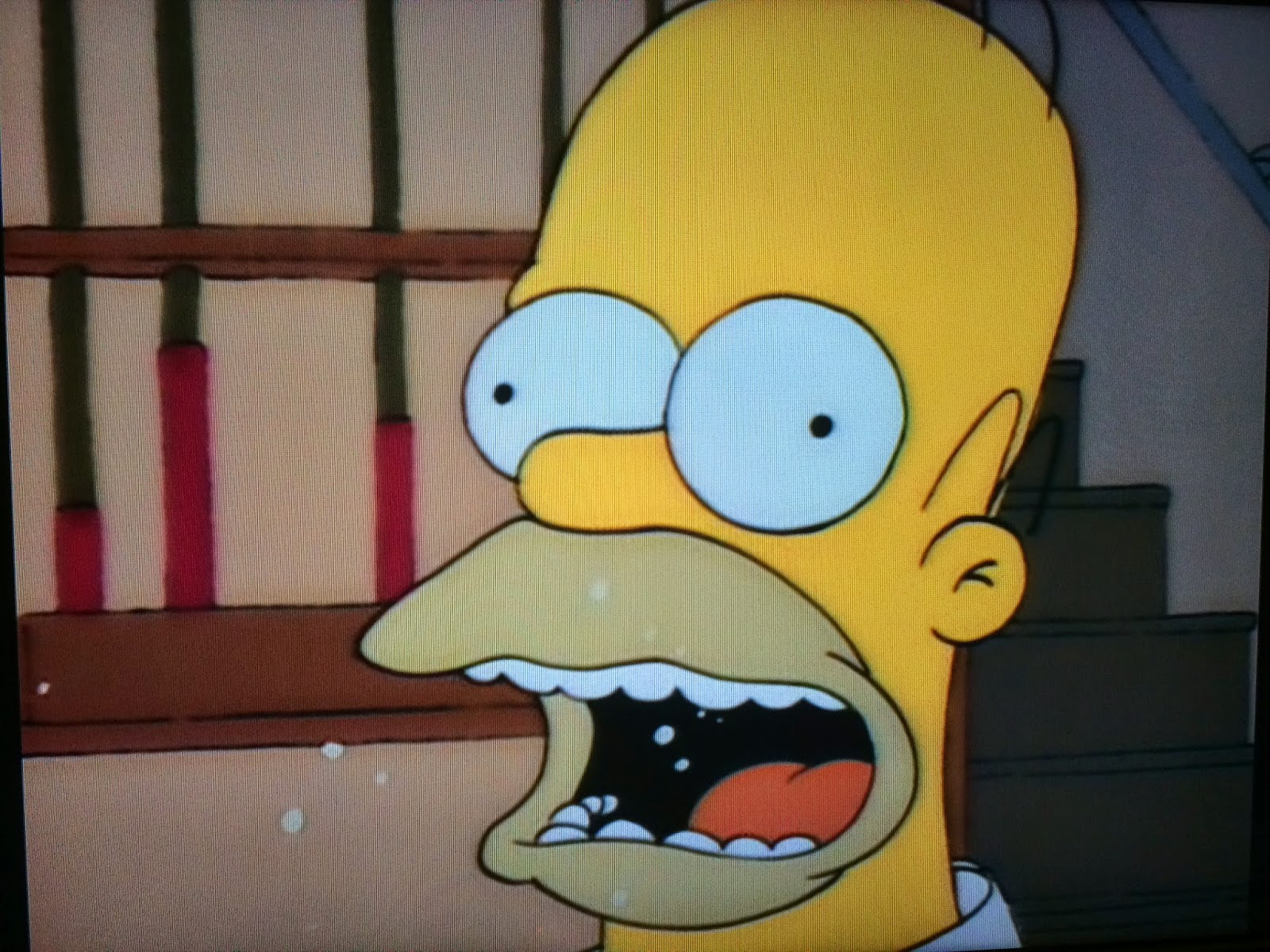 Ned writes an apology letter but Homer, Bart, and Lisa just make fun of him. Marge exclaims that she wishes the Simpsons were as close as the Flanders, so Homer decides to take everyone out for milkshakes and mini-golf, where they run into the Flanders. Bart and Todd discover that there is a mini-golf tournament coming up and Homer decides Bart must enter and win.

I have loved this episode since the ripe, young age of 6 and if there's one thing I've always loved about early Simpsons (seasons 1 through about 3 or 4ish), it's that they are all about the heart-tugging family drama and this one has it in spades. Just about every son in the world can relate to being pushed a little (or a lot) too hard by their dad to do something they don't really wanna do whether it's play sports or be a lawyer (hi dad!) or even just marry a nice girl and have another son to pass on his name. But no one delivers the pathos of the father/son relationship quite the way Homer and Bart do.

It's hard not to notice that the comedic, satirical edge is still being sharpened in the early years. The jokes are a bit more formulaic and cartoony and the tropes a bit more canned but the dramatic chops were always there and you can see flashes of what's to come. The characters are also not fully developed--at least not fully developed into what they would later become. Marge is still the fairly generic housewife, although they start hinting at her comedic timing. Lisa is far more childish in spite of still being a bookworm who knows everyone at the local library by name and can expertly navigate their card catalog system. Homer clings to shreds of common sense he would eventually eschew in later seasons.

But the money of this episode is the family and neighborly drama accented with light-hearted humor and loving satire. Homer as the overbearing, prideful father obsessed with besting his privileged but good-hearted neighbor and doing so vicariously through his son. Bart as the problem child who's never been very good at much of anything, suddenly pressured to be the best at ostensibly one of the least competitive games there is. Ned as the warm, welcoming, way-too-nice neighbor who just wants so badly to be your pal to the point of blaming himself for you being a jerk but then ultimately gets sucked into Homer's ultra-competitiveness. Even Lisa is great as Bart's spiritual guide to winning at mini-golf using geometry and Taoism.

There's just so much to love here...

-This is the first episode ever to prominently feature Ned Flanders. The character was originally conceived as a caricature but eventually became beloved by the show's conservative Christian viewers. According to one of the show's creators, Ned is very popular among members of The Salvation Army.

-One show creator's father-in-law has a mug exactly like the "MACHO MUG" Ned uses to serve Homer a beer.

-When Homer tells Bart "It is NOT OK to lose!" that line was written by James L. Brooks. It was also his idea to make the consequence of the bet between Homer and Ned that the father of the boy who doesn't win would mow the other's lawn in his wife's Sunday dress.


-Apparently, Bart usually mows the lawn but today Homer has to do it so that Bart can work on his science project, which is, apparently, The Effects of Reading Comic Books on a Potato. Bart also spells potato "potatoe" much like Dan Quayle famously did a year and a half later at the Muñoz Rivera Elementary School spelling bee in Trenton, New Jersey. 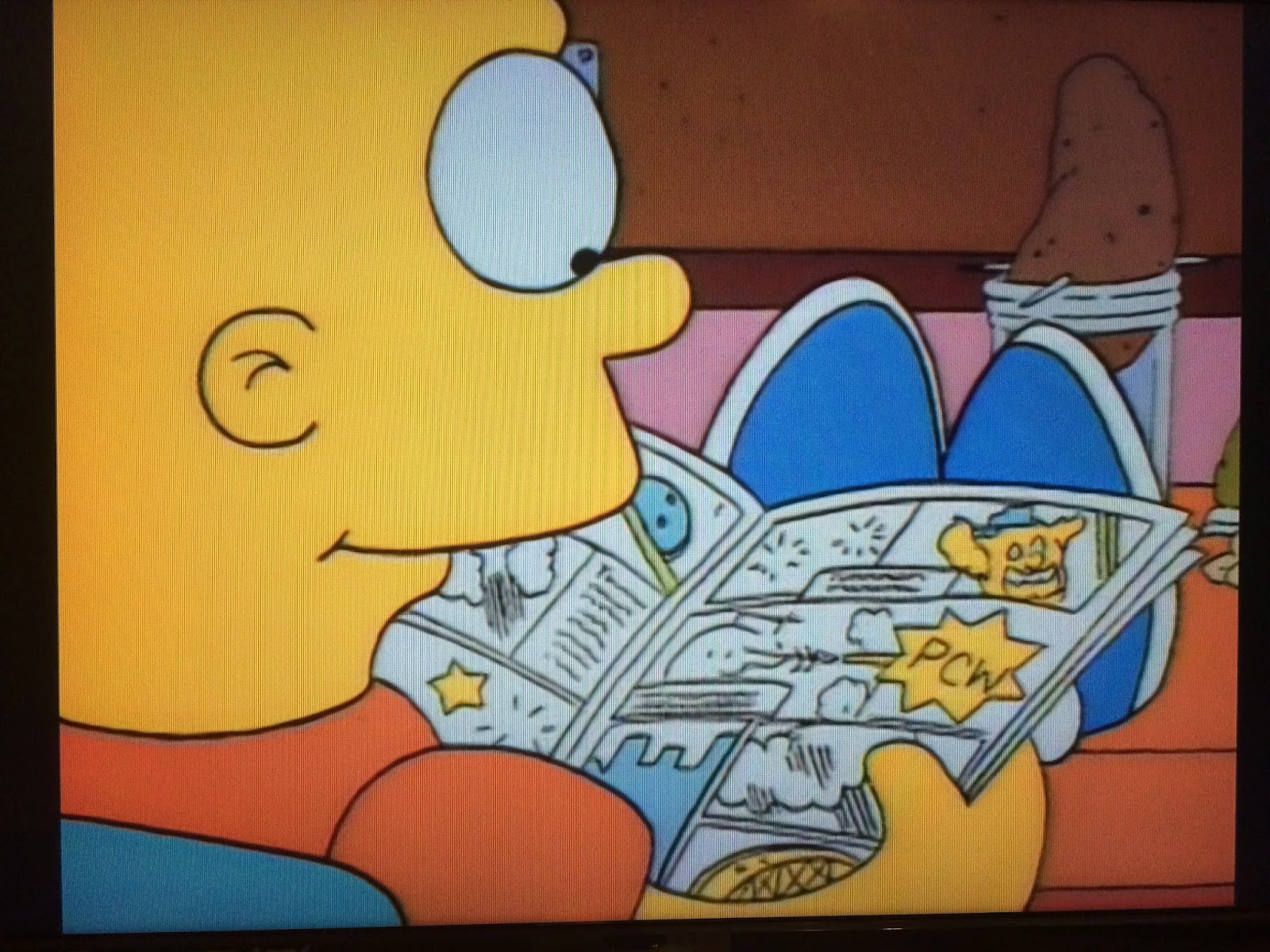 -Homer, after Ned points out several patches of crabgrass in his lawn: "There's nothing wrong with crabgrass! It just has a bad name, that's all. Everyone would love it if it had a cute name like...ELF grass." 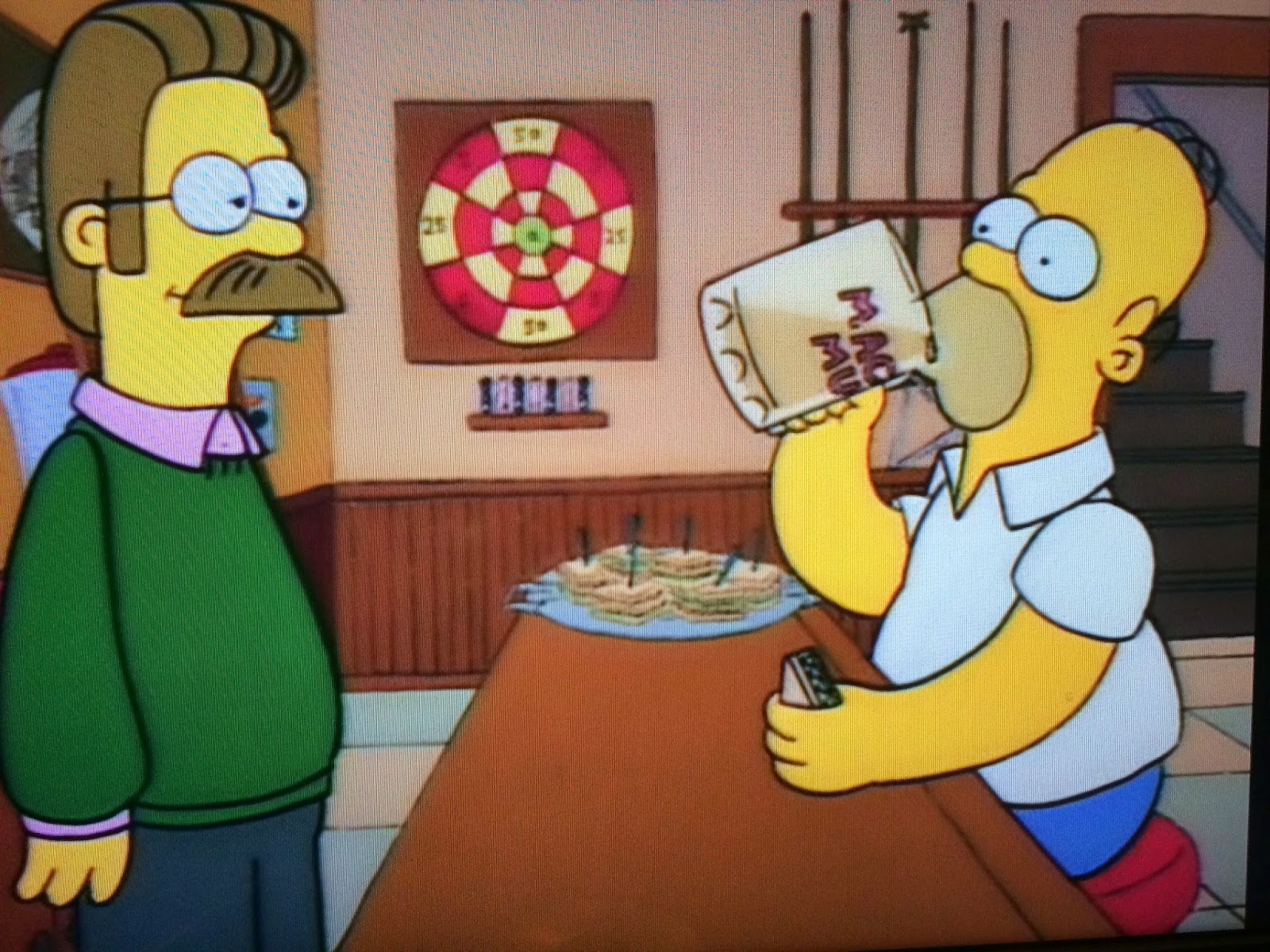 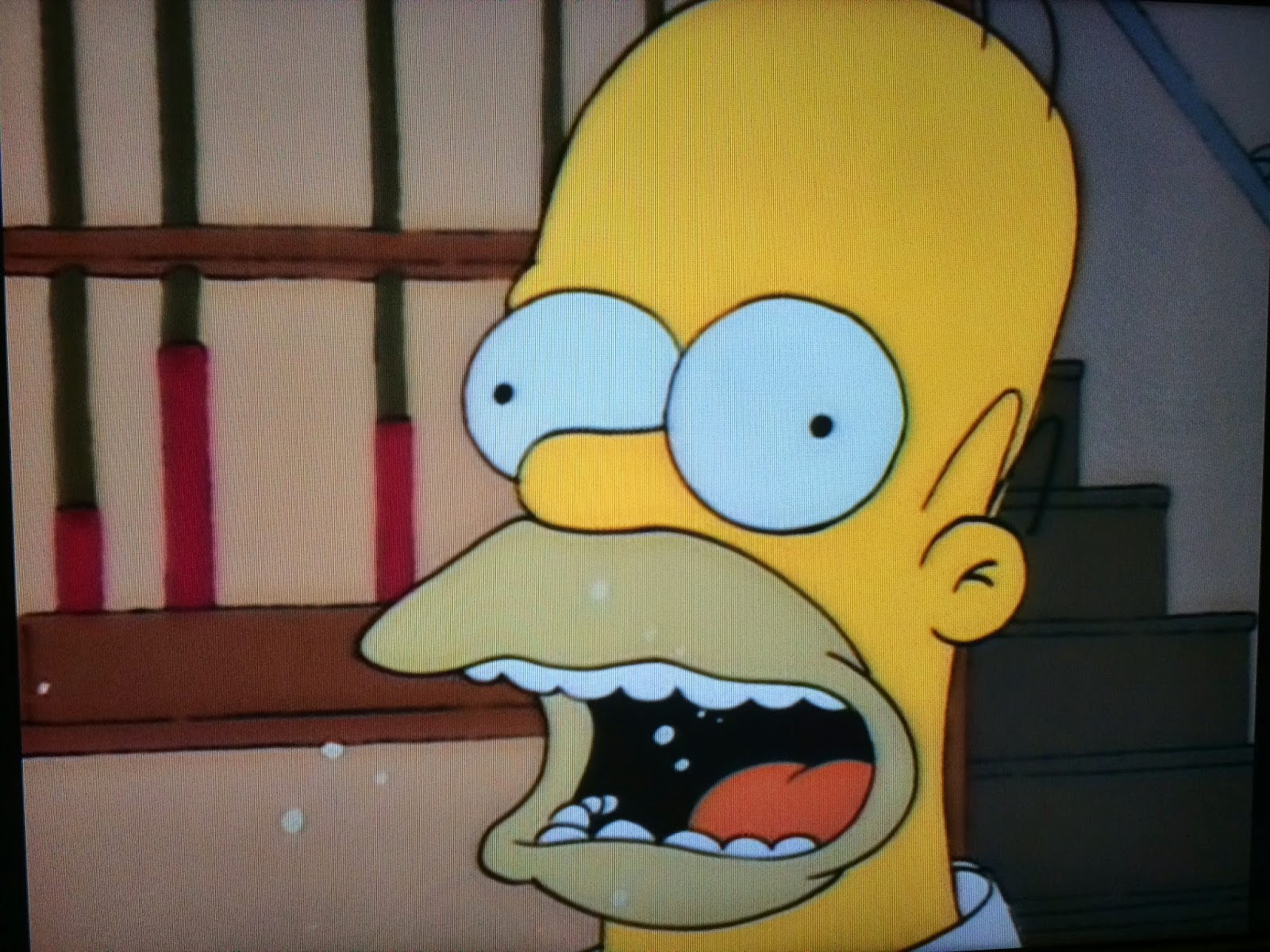 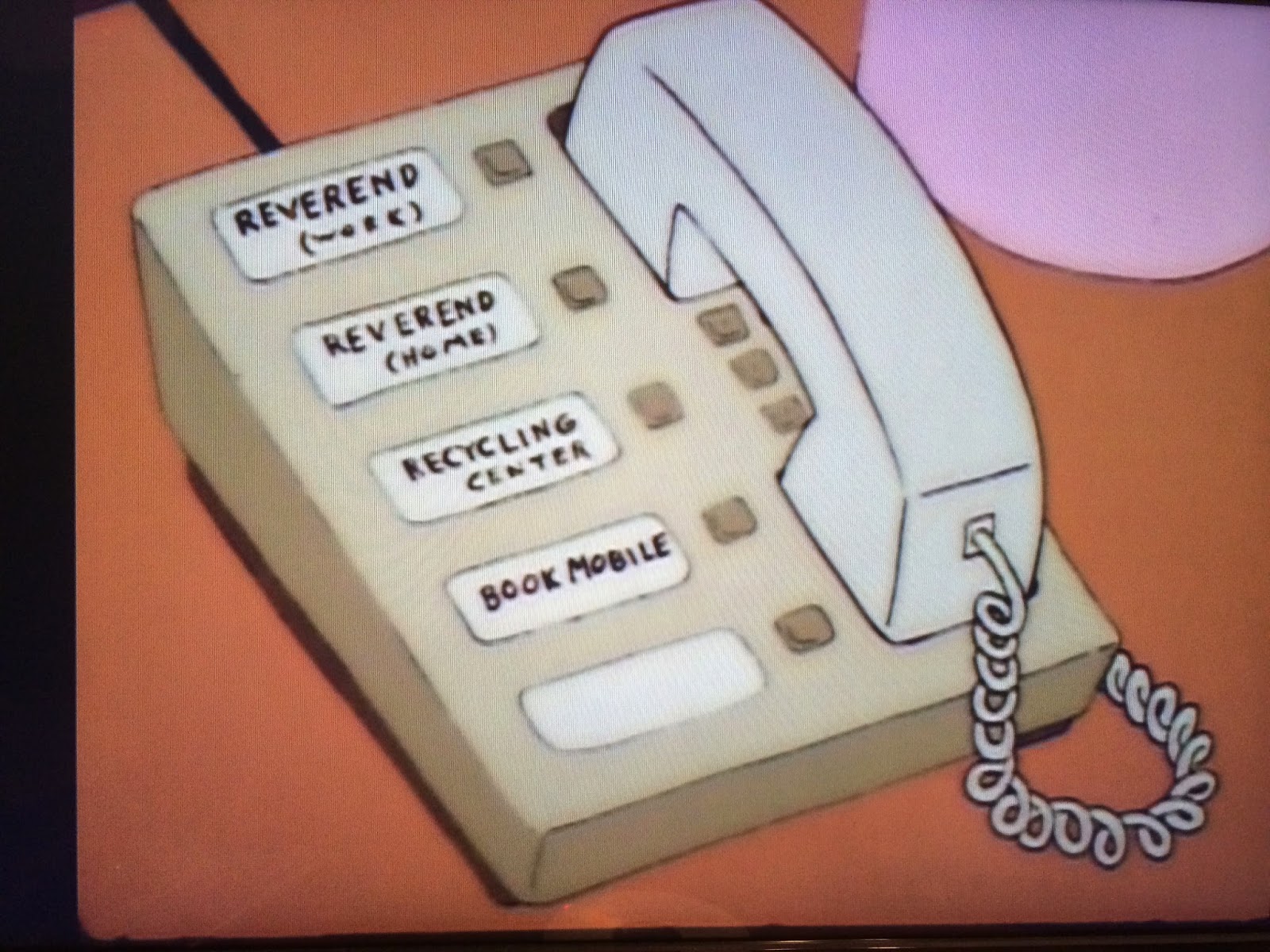 -Helen Lovejoy: "It sounds like Ned Flanders is having some sort of crisis."
Reverend Lovejoy: "Ugh. Probably stepped on a worm..." 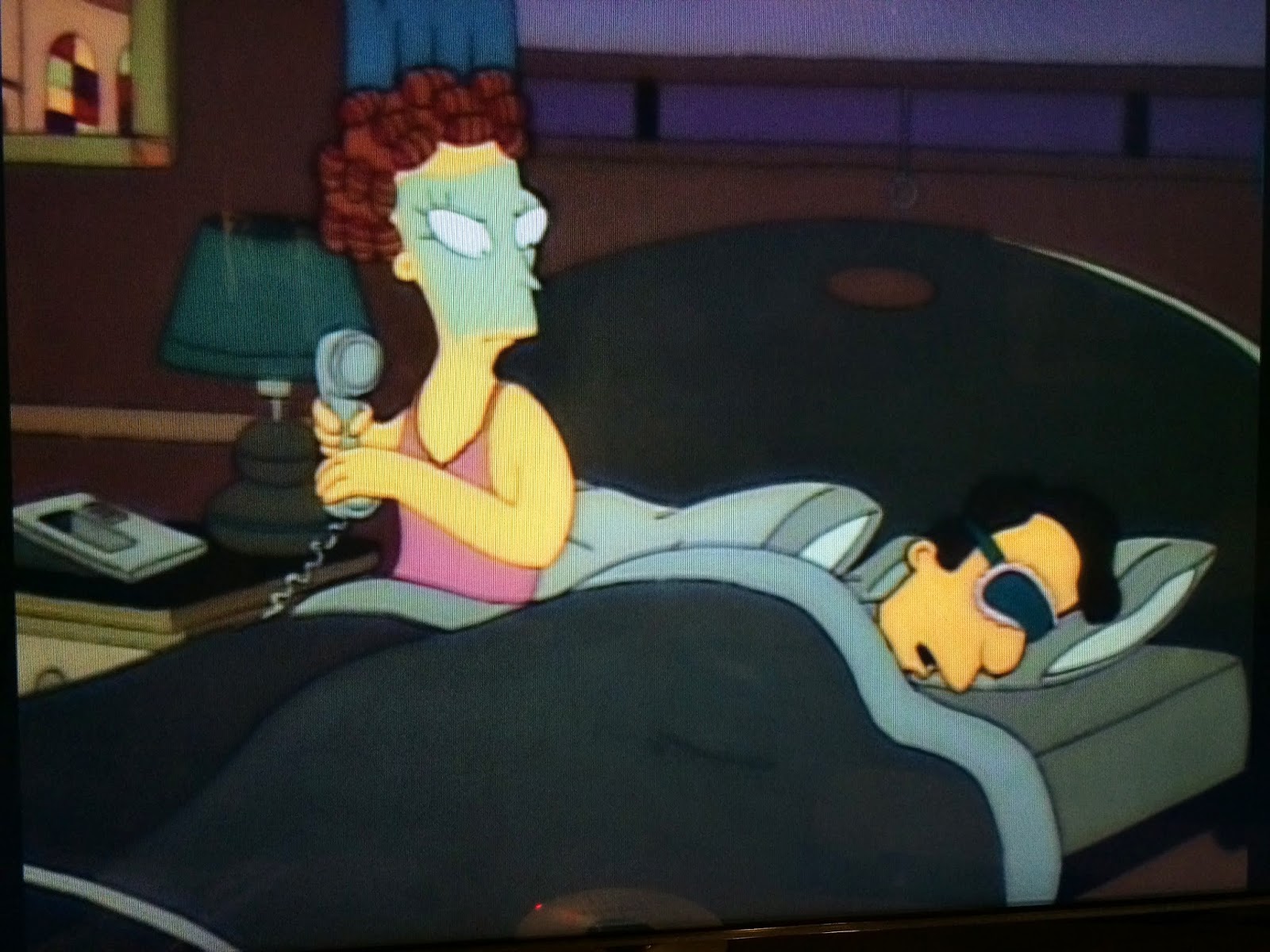 -According to one show creator, there was a running gag on the show during this time period that everyone had personalized stationary; e.g. "From the Mind of Marge," "From the Head of Homer," and...
-Homer: [reading Ned's apology letter] "And yet, I feel a great sadness [giggle] in my bosom..." 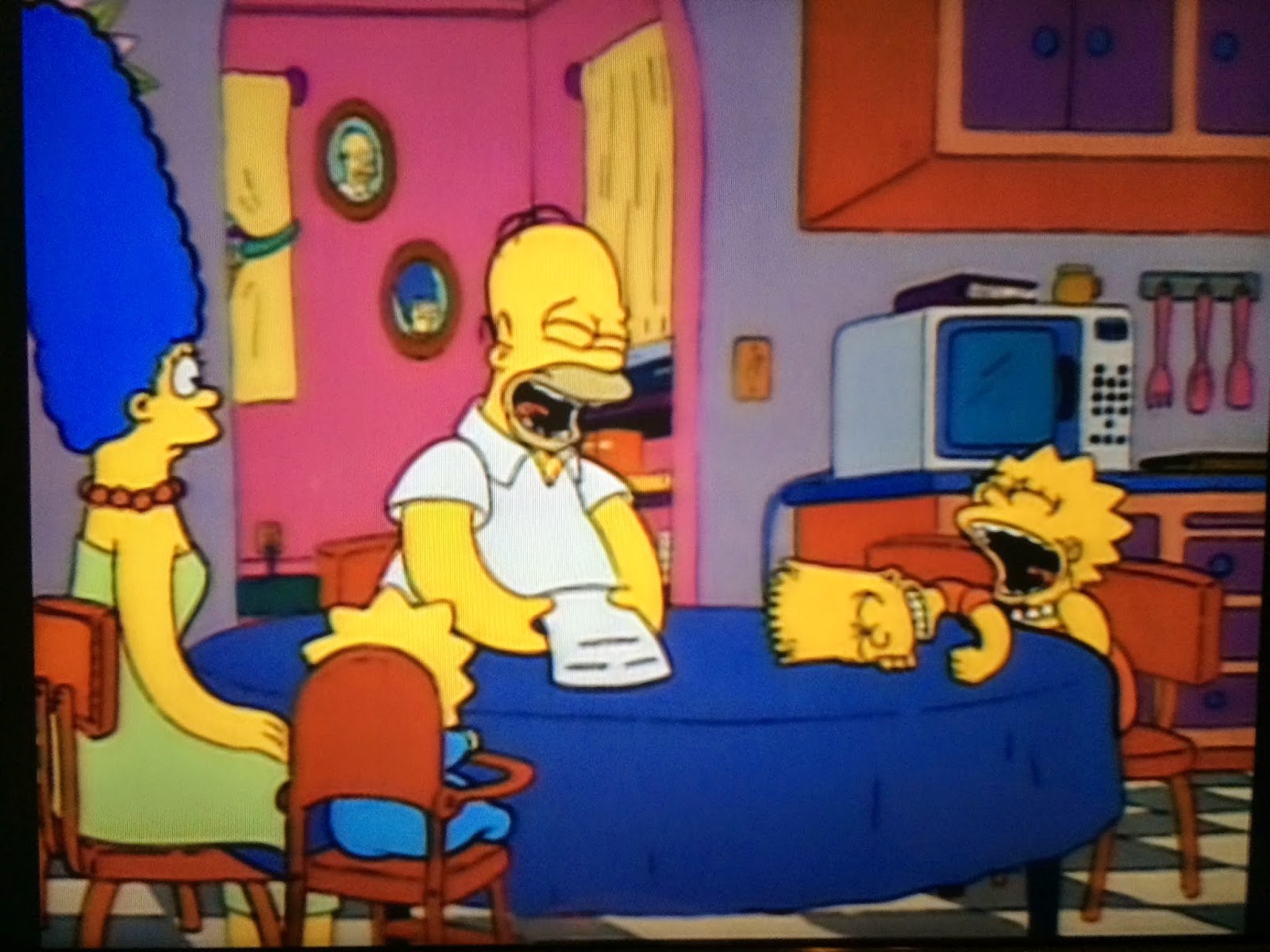 Marge: "I THINK THAT'S TERRIBLE! A MAN OPENS HIS HEART AND YOU MAKE FUN OF HIM!" 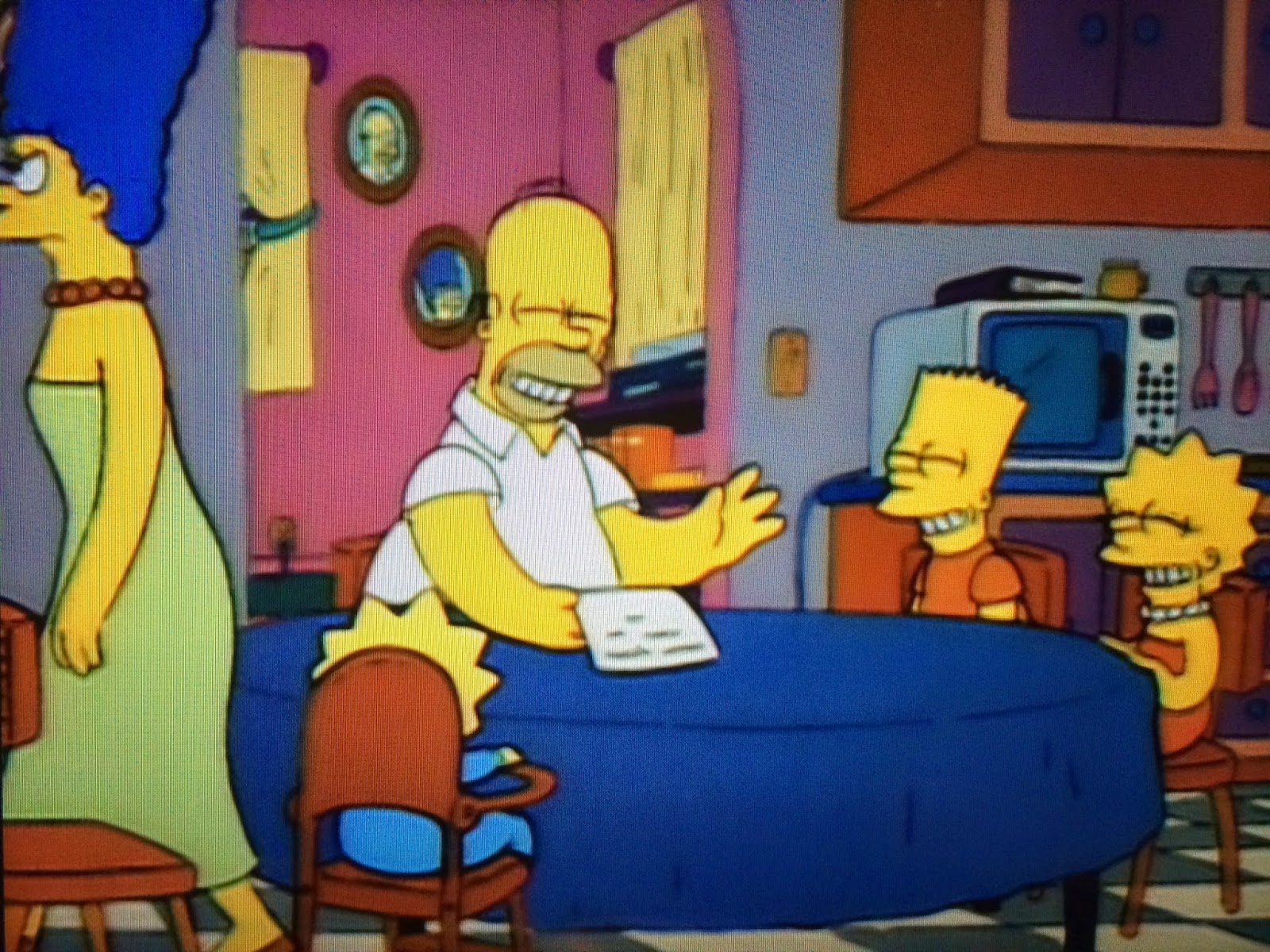 -One of my favorite things in early Simpsons is and forever will be Maggie falling flat on her face out of nowhere and for no apparent reason. 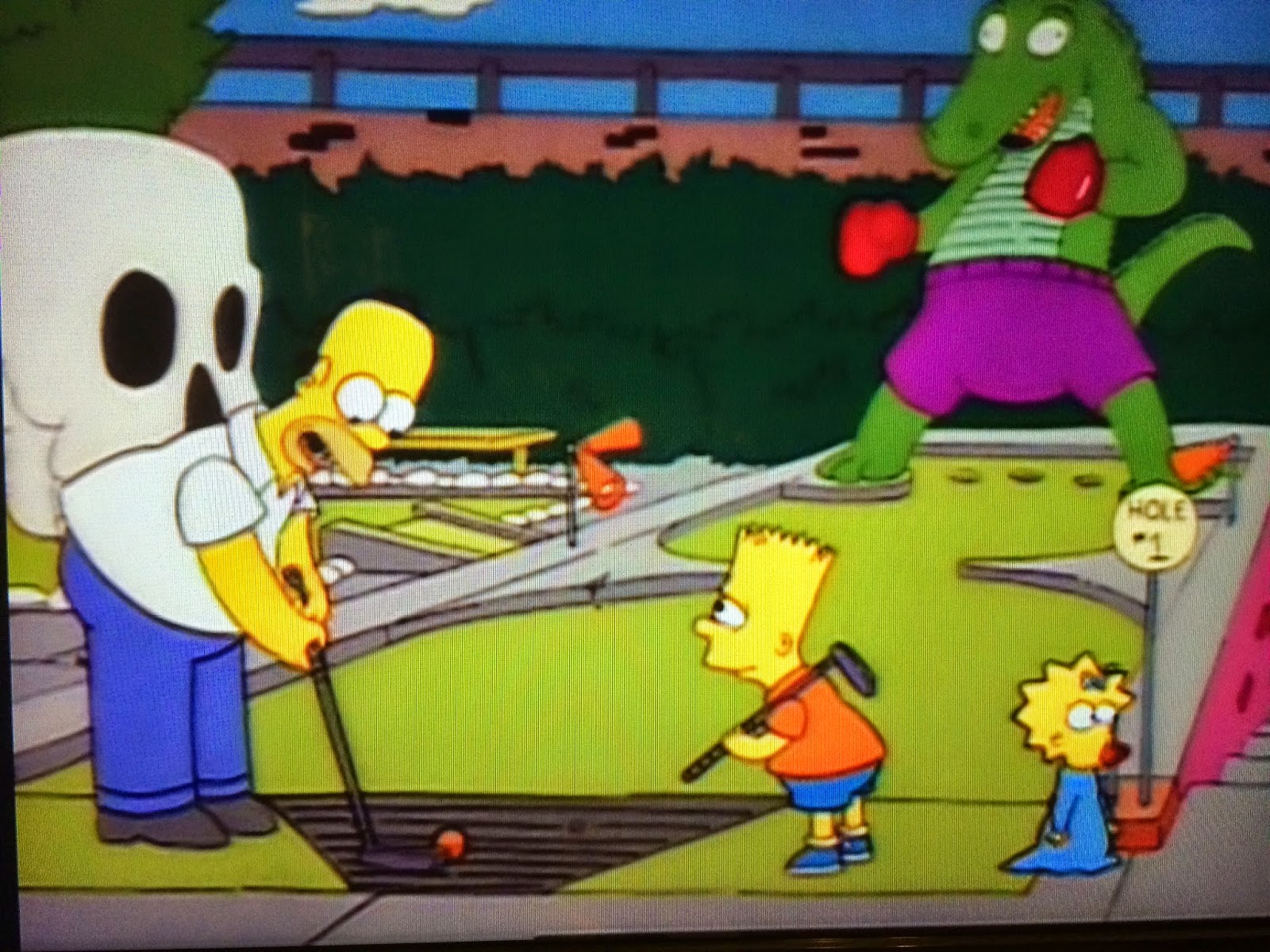 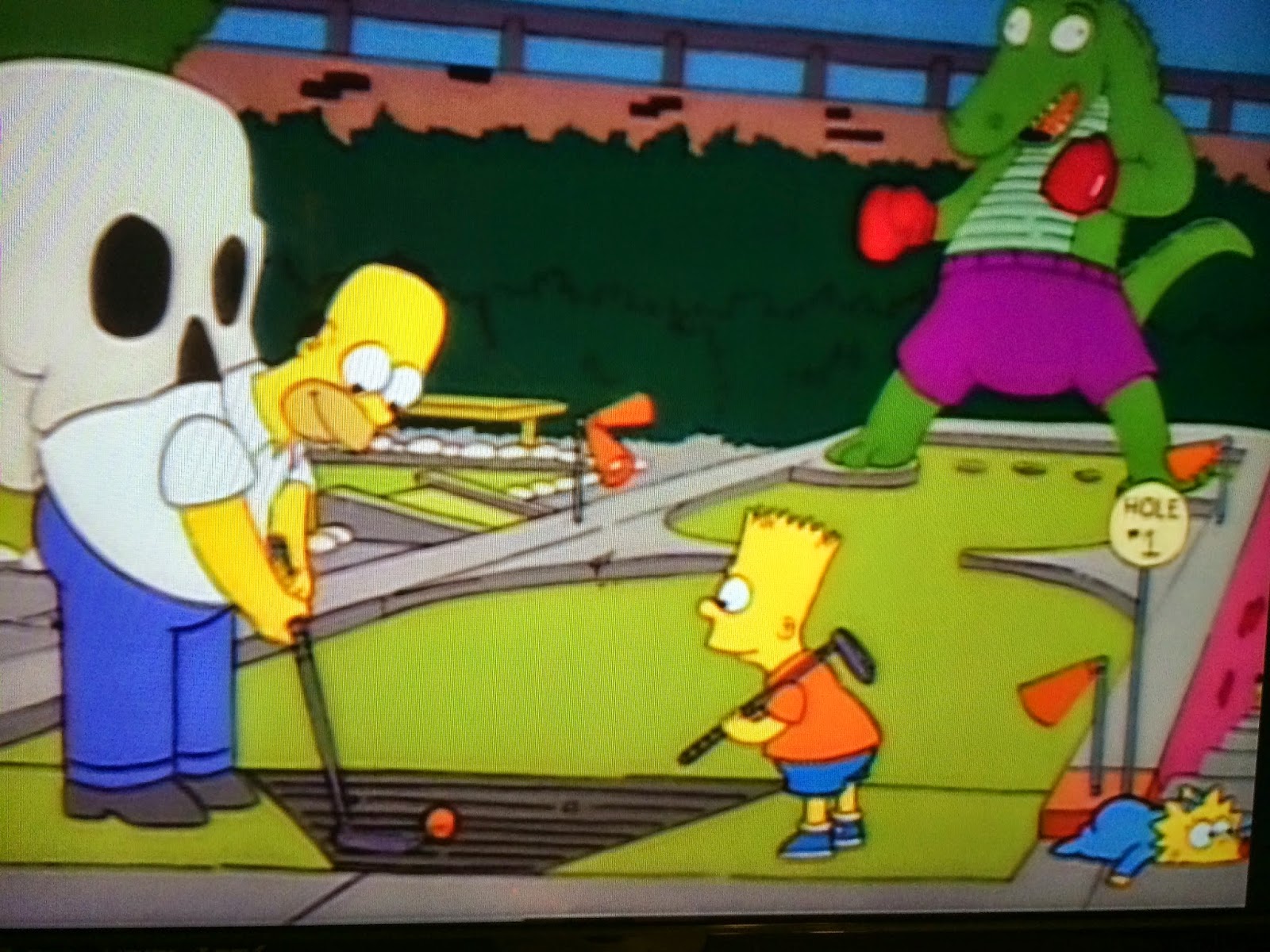 -Maggie goes for a ride! 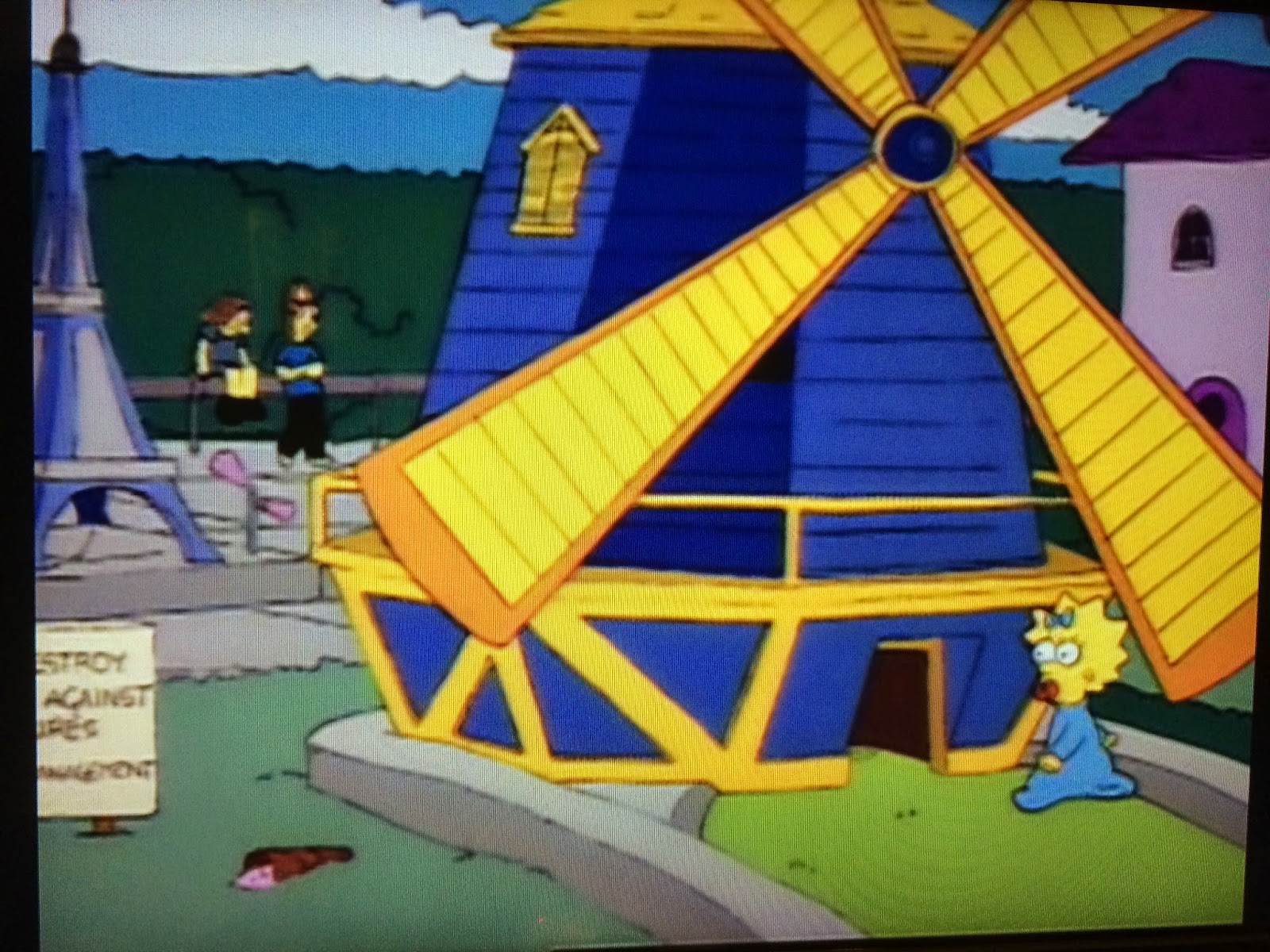 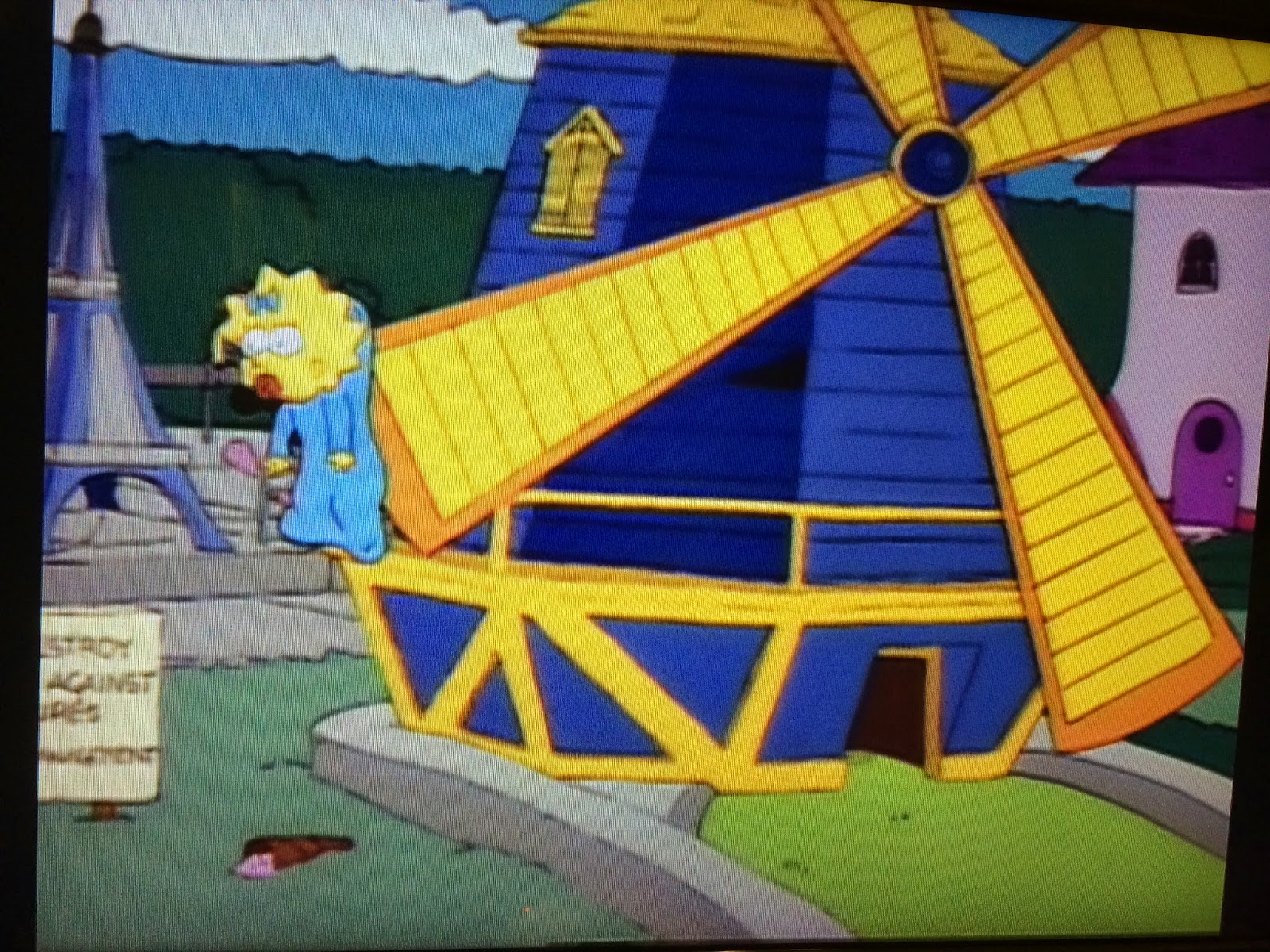 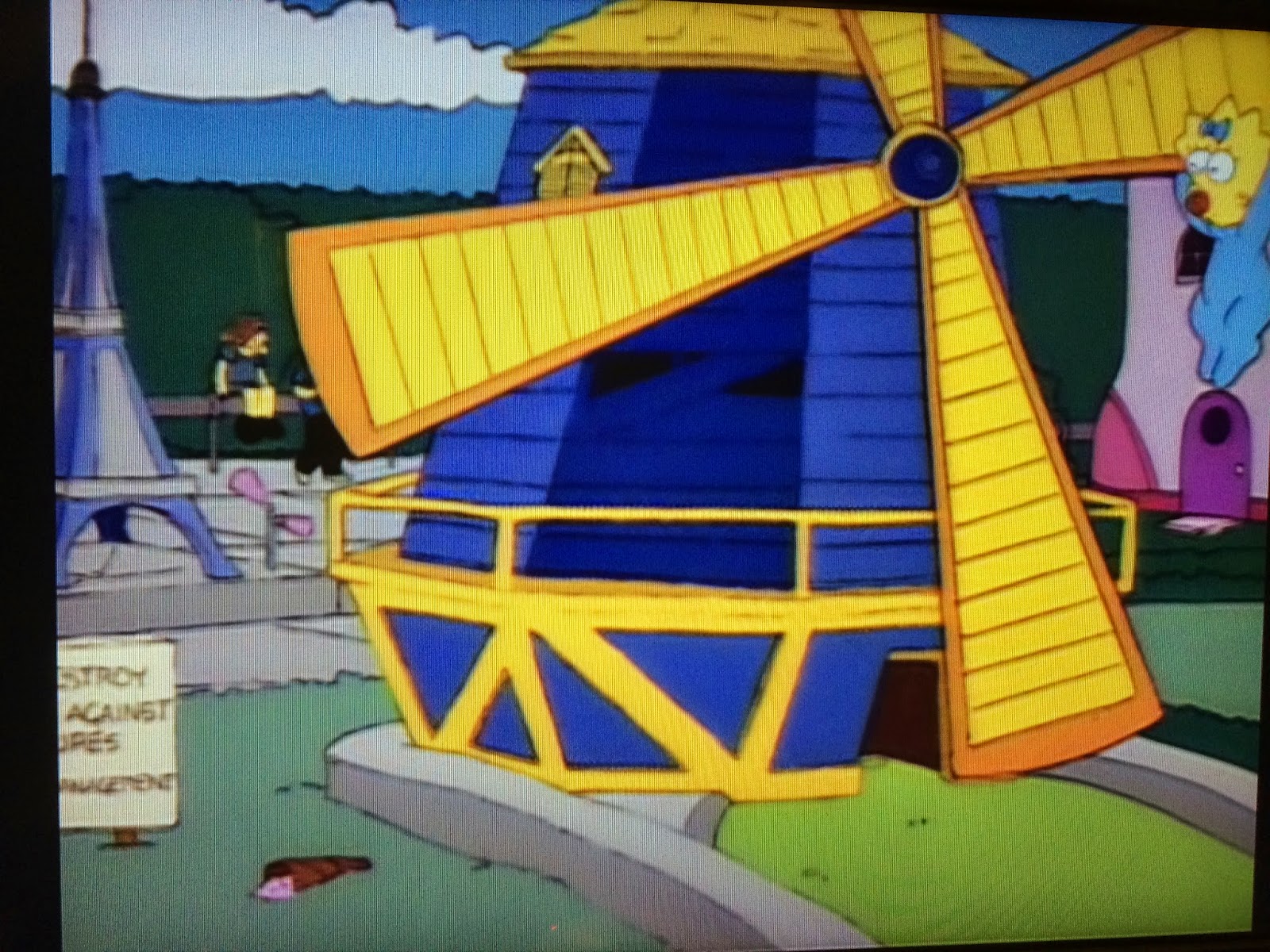 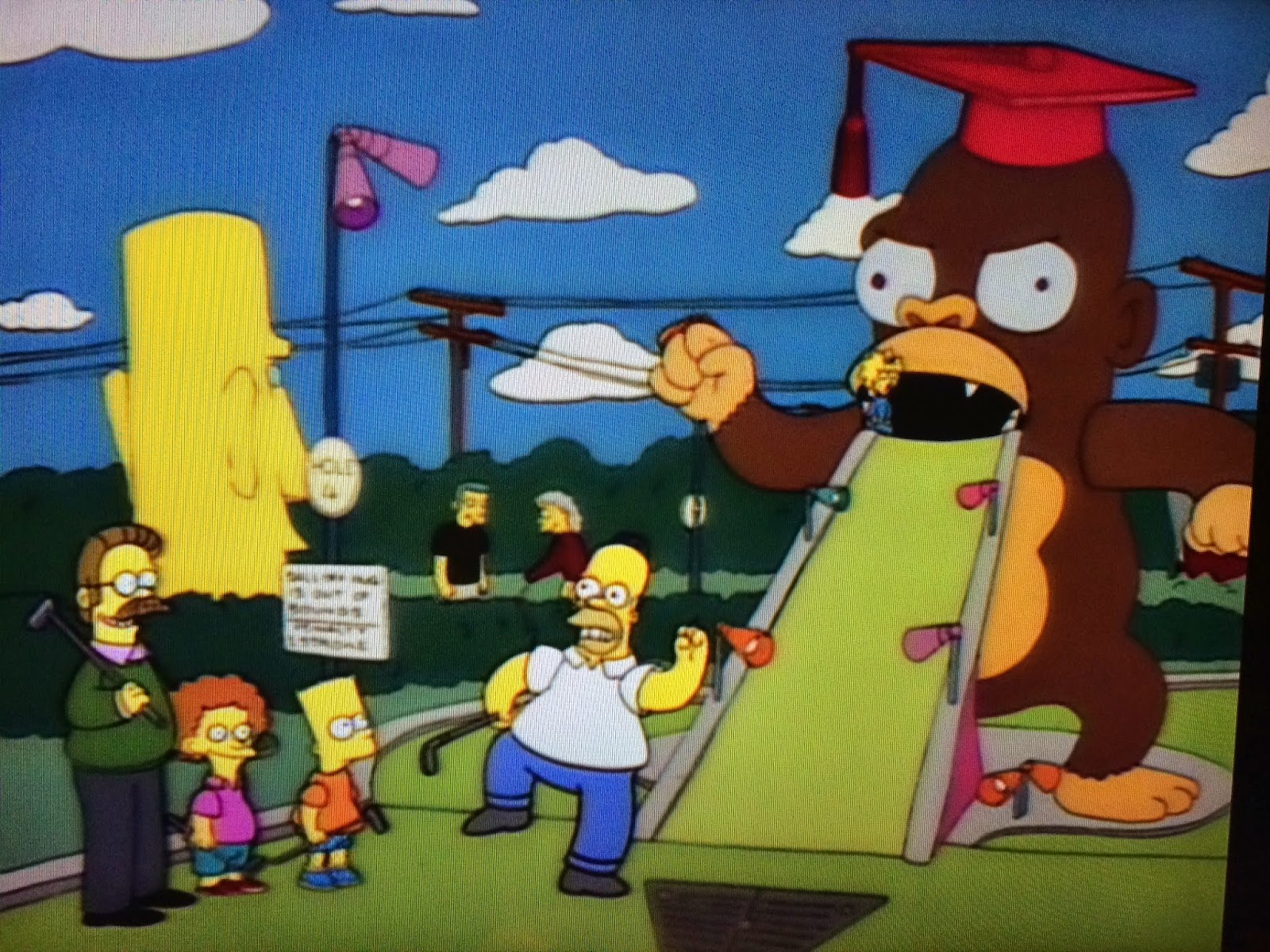 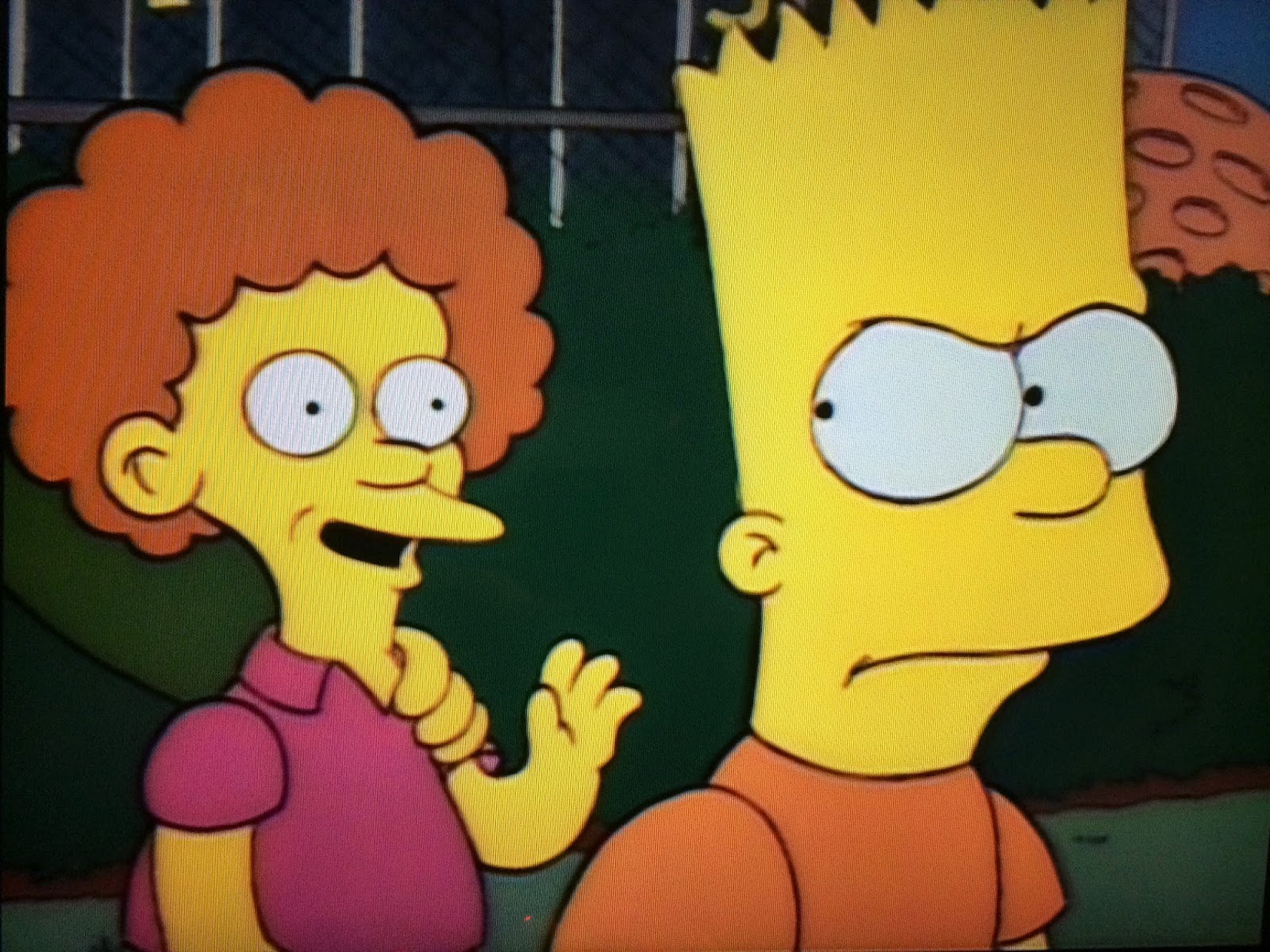 -Bart: "Wow! Free balloons for everyone who enters!"
-Homer: "Now, keep your head down. NO! Not you, I'm talking to the boy!" 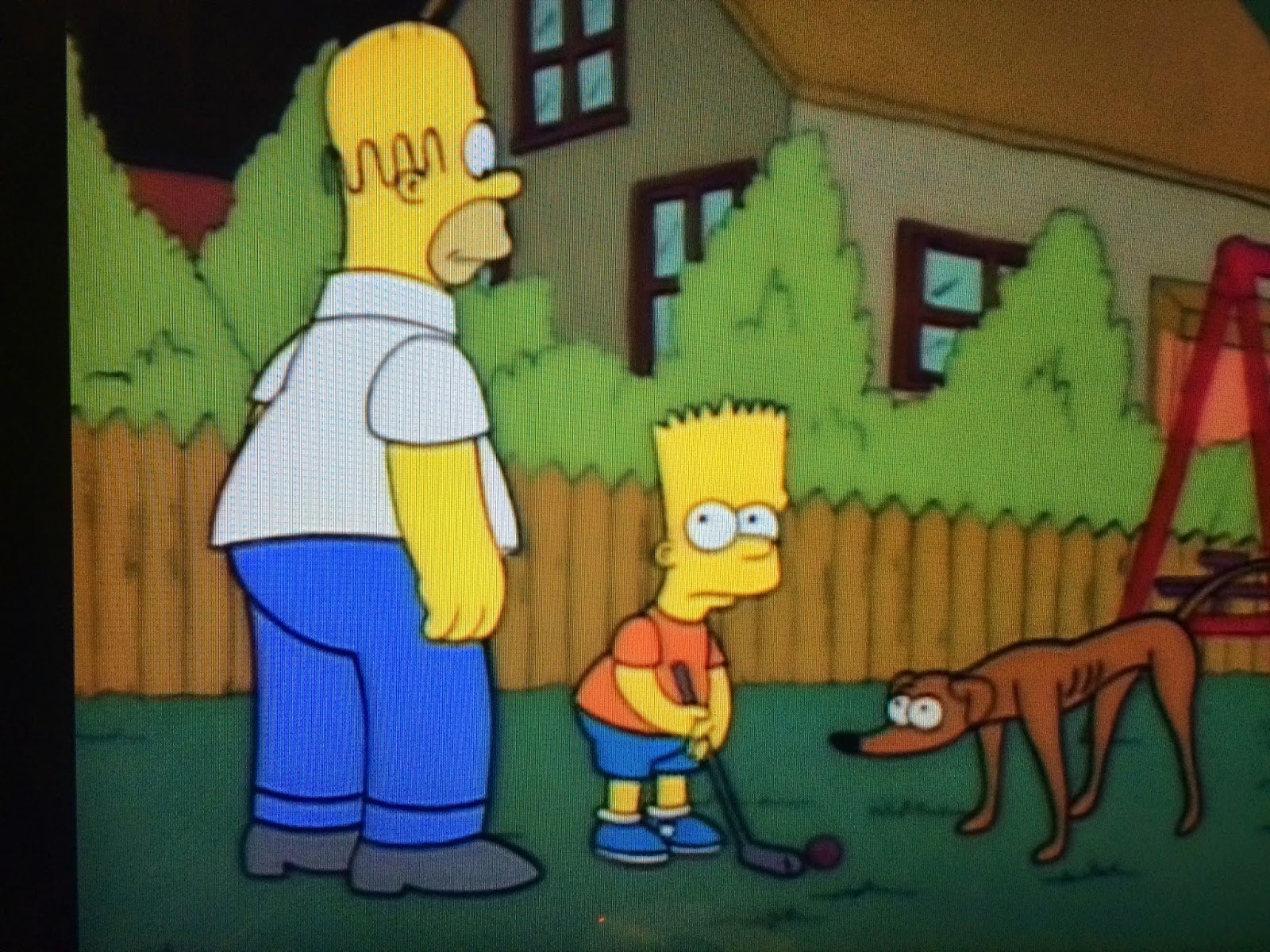 -Marge: "Homer, I couldn't help but overhear you warp Bart's mind."
Homer: "And?" 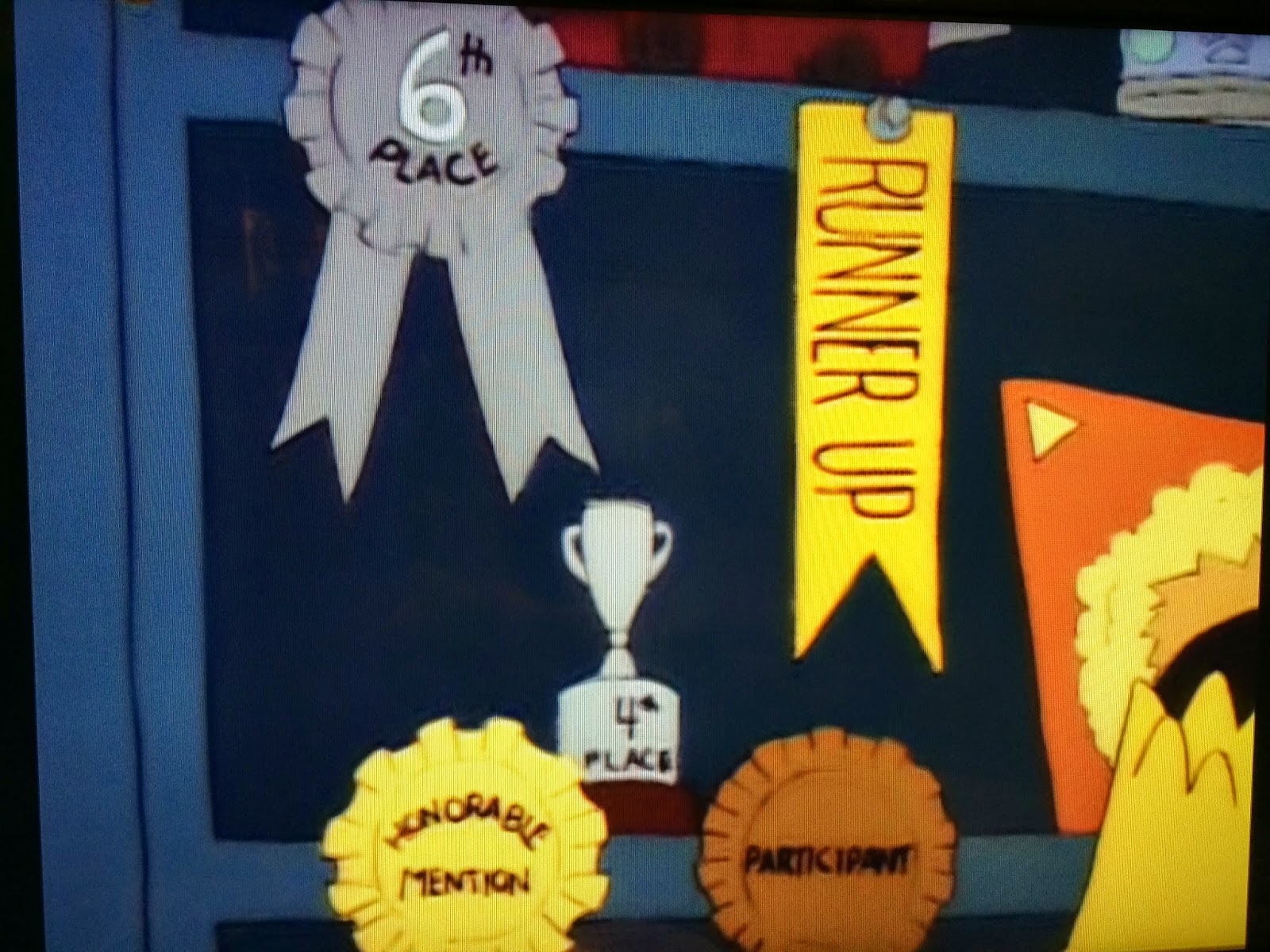 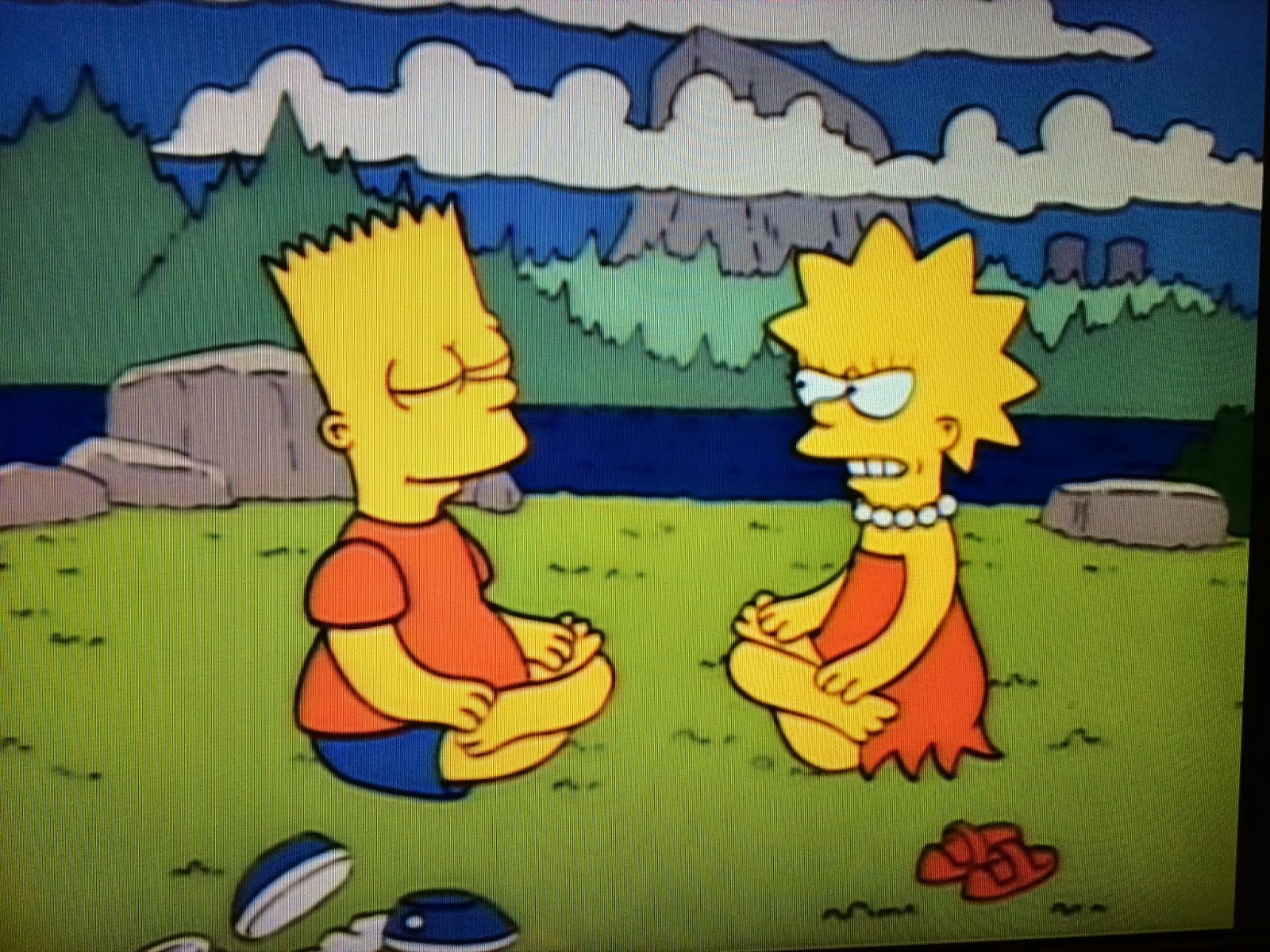 -Lisa: "What is the sound of one hand clapping?"
Bart: "Piece of cake." 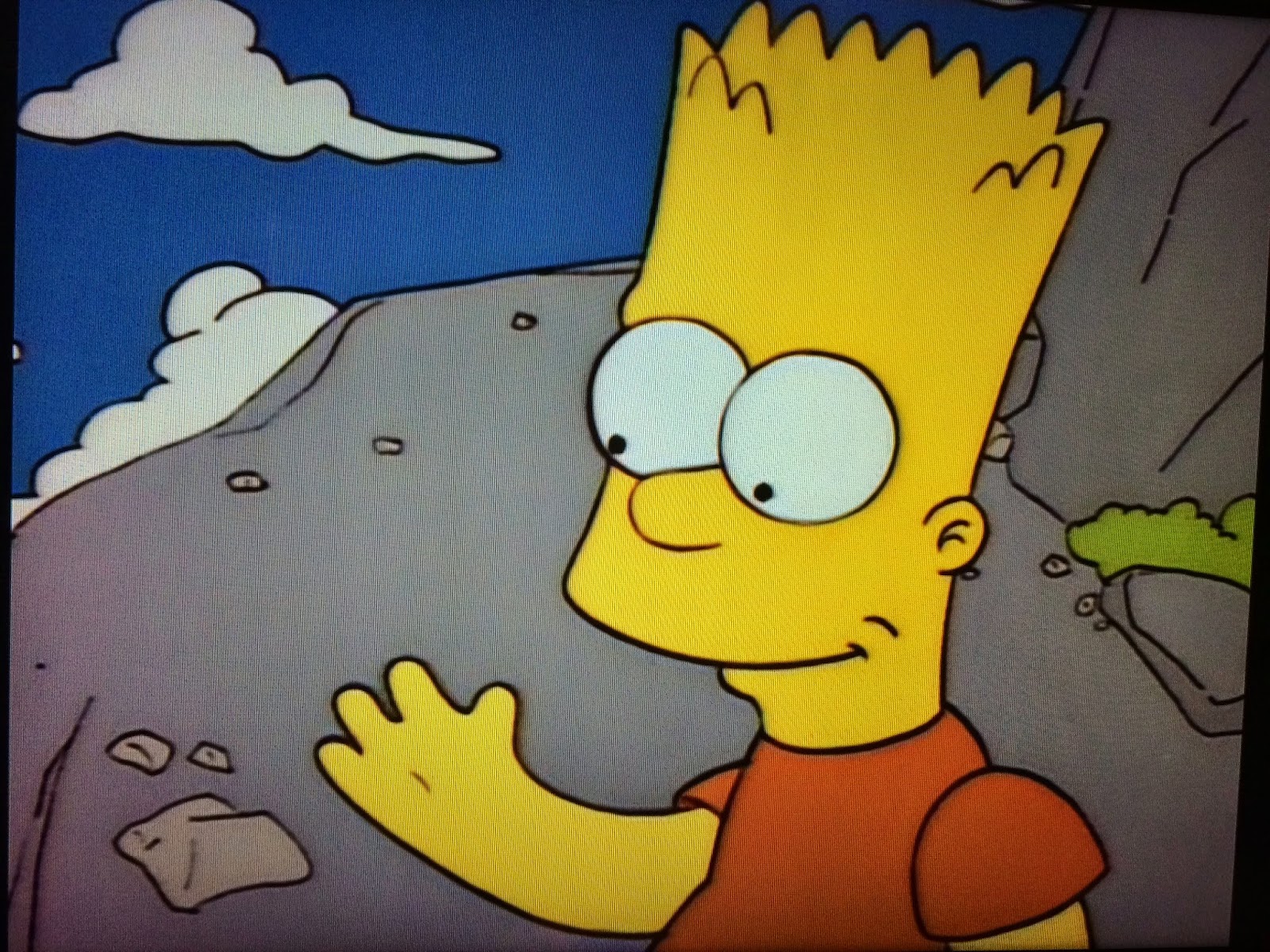 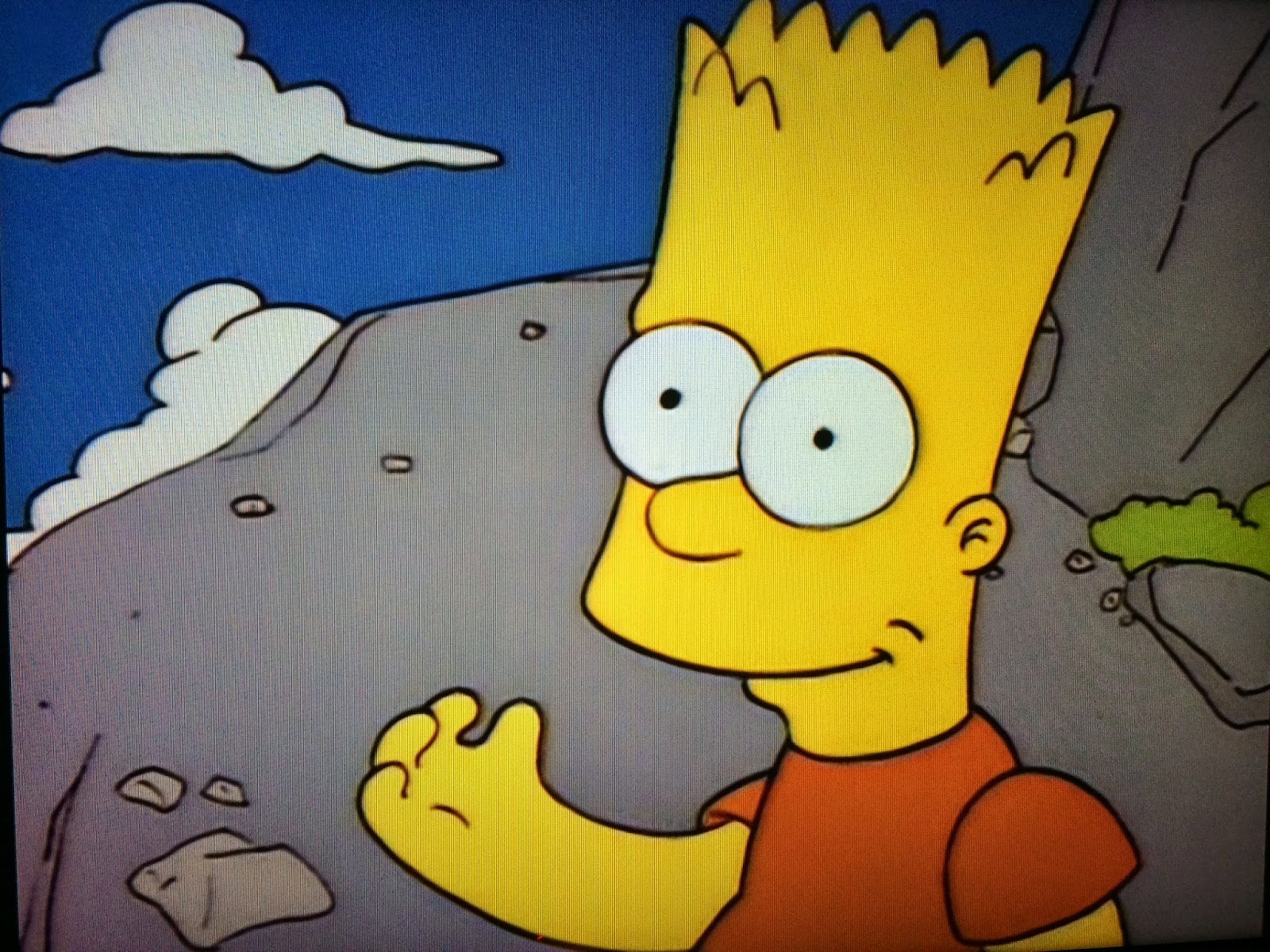 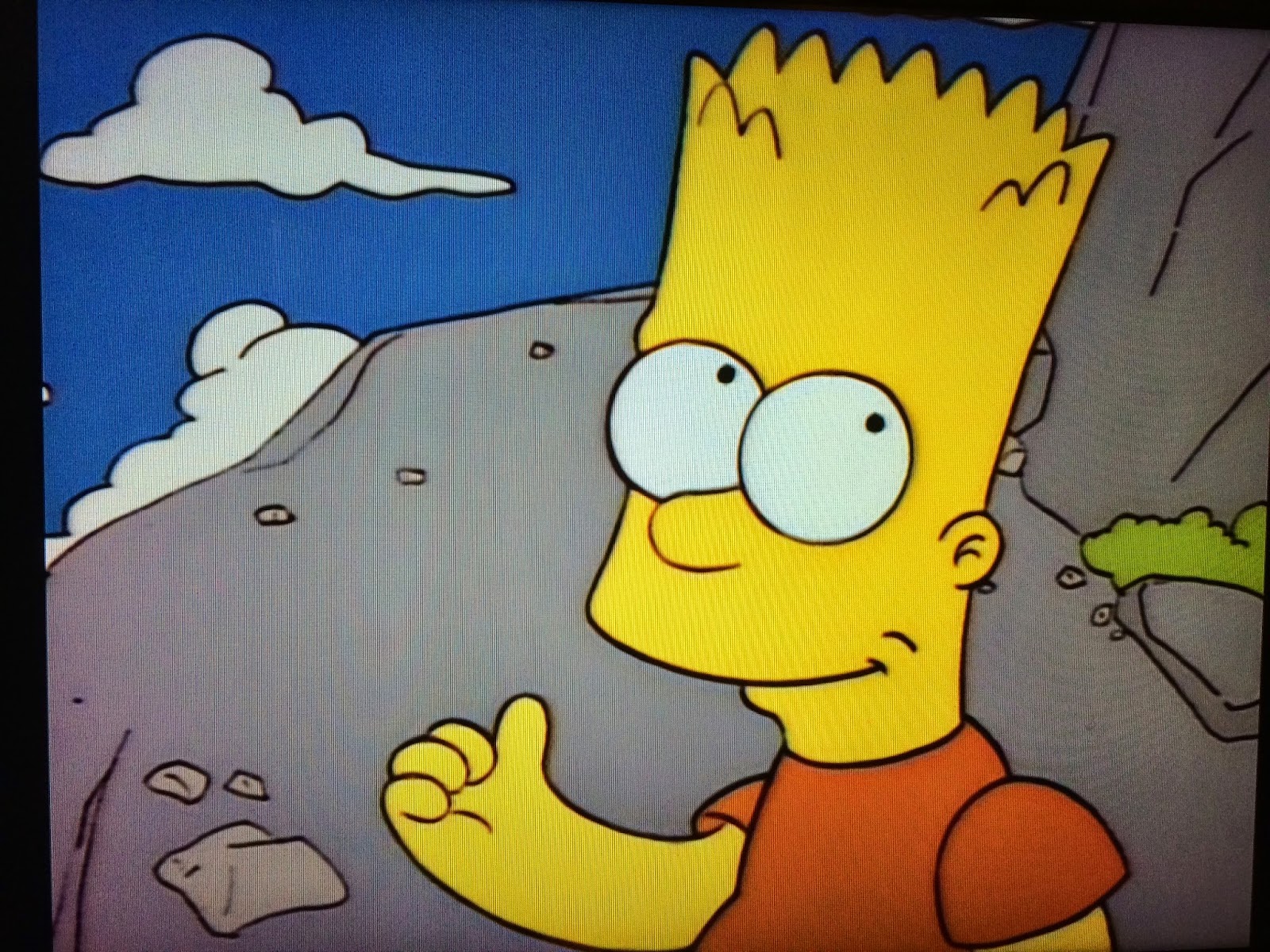 Lisa: "Ugh. Let's try another one. If a tree falls in the woods and no one's around, does it make a sound?" 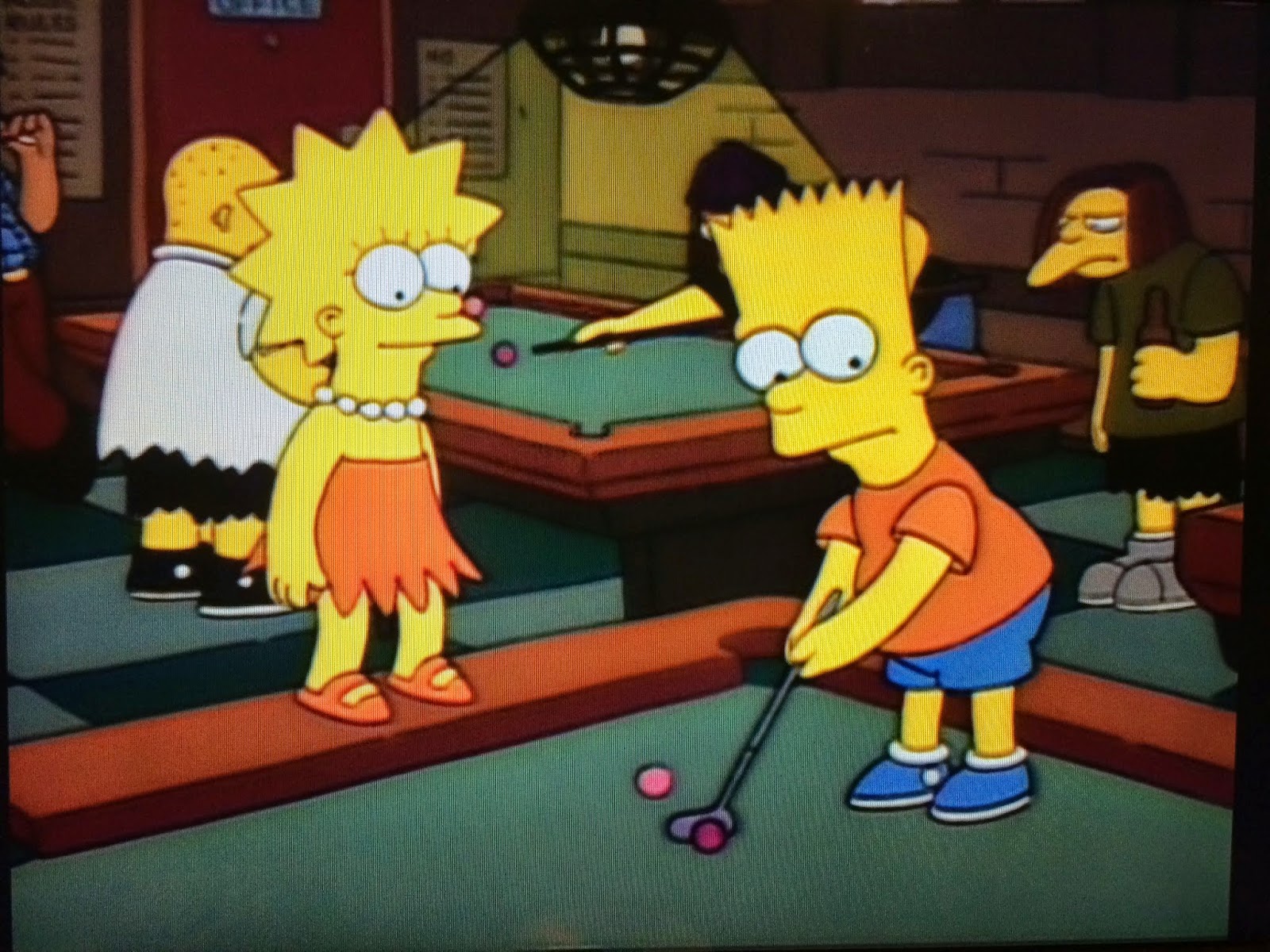 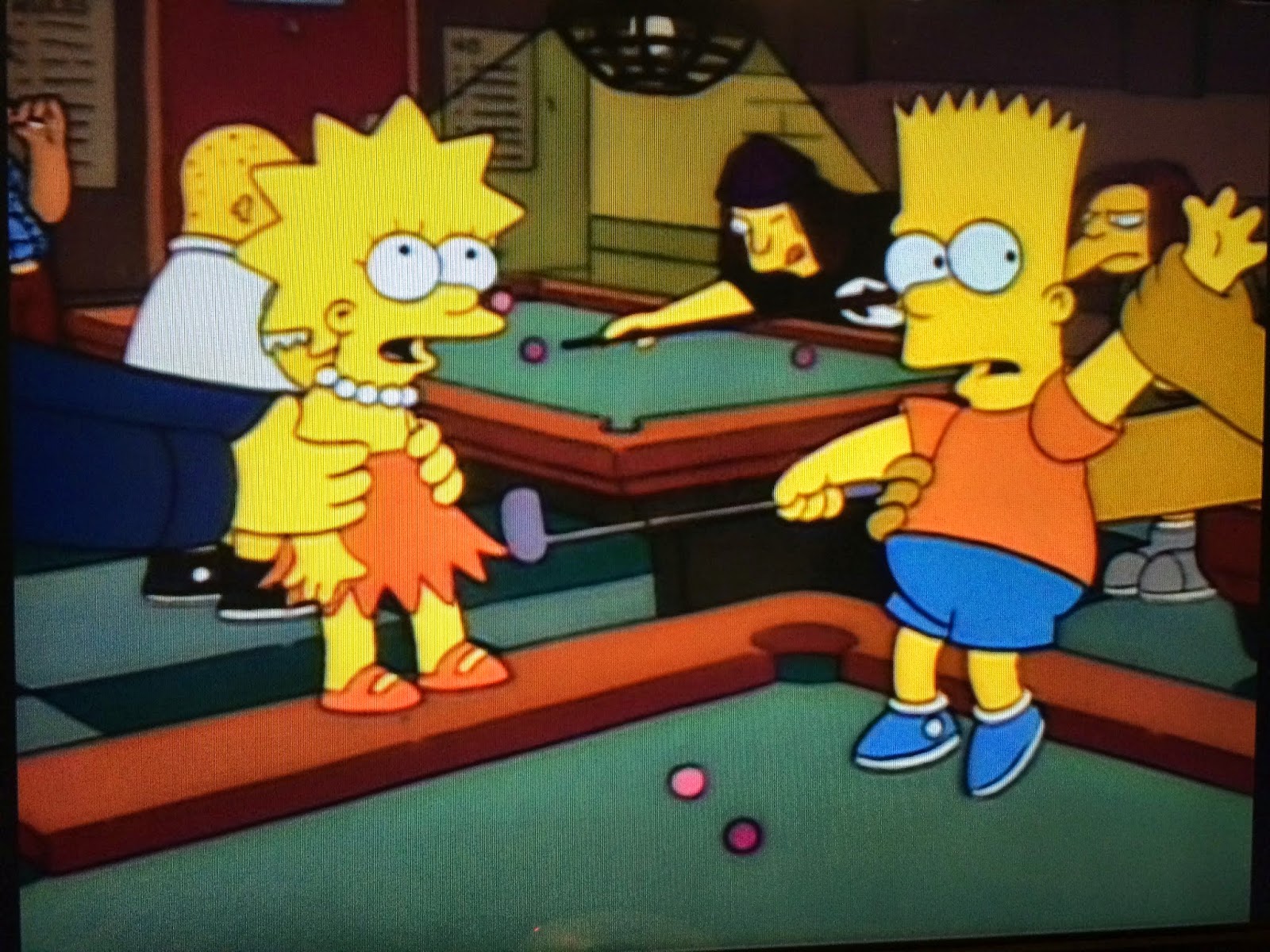 Apparently Krusty takes off all his makeup and goes to dive bars to play pool with Herman, the owner of Herman's Military Antiques (formerly Pet Shop): 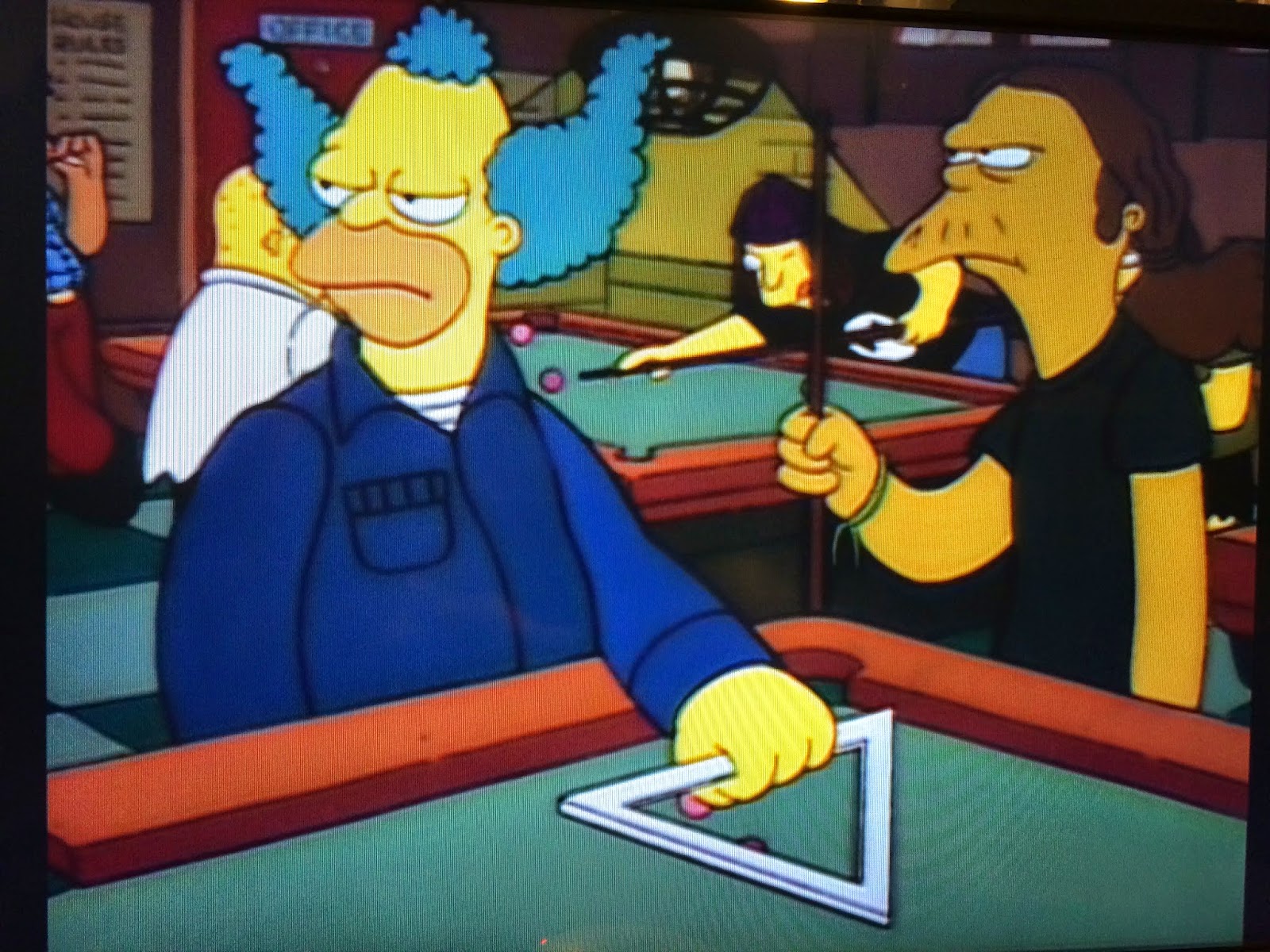 -Easily the most enduring image of this episode, as far as I'm concerned: 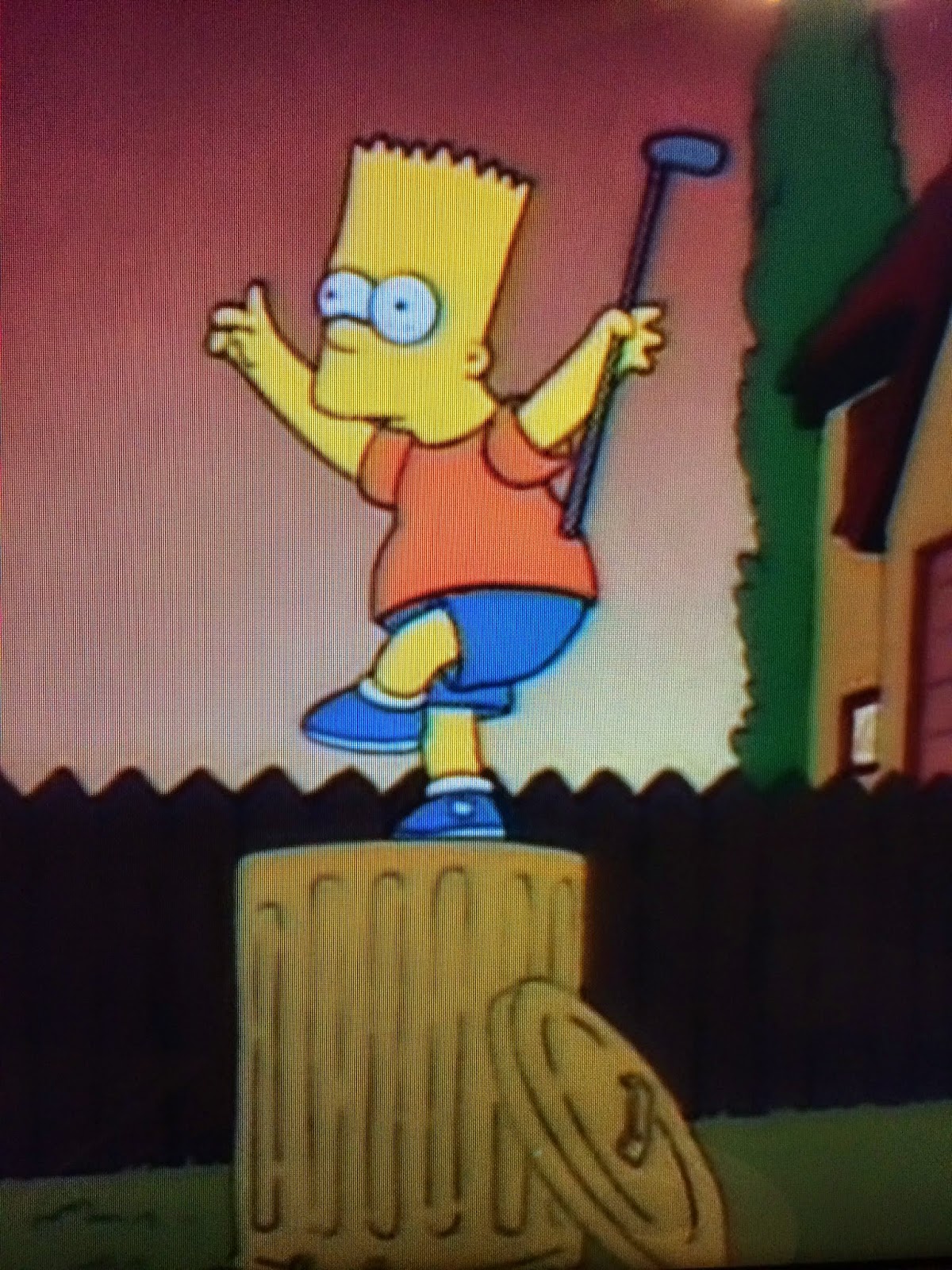 -"To my son Todd, Love Dad"
-"Forgive an old Brit for crying but this is the most stirring display of gallantry and sportsmanship since Mountbatten gave India back to the Punjabs." 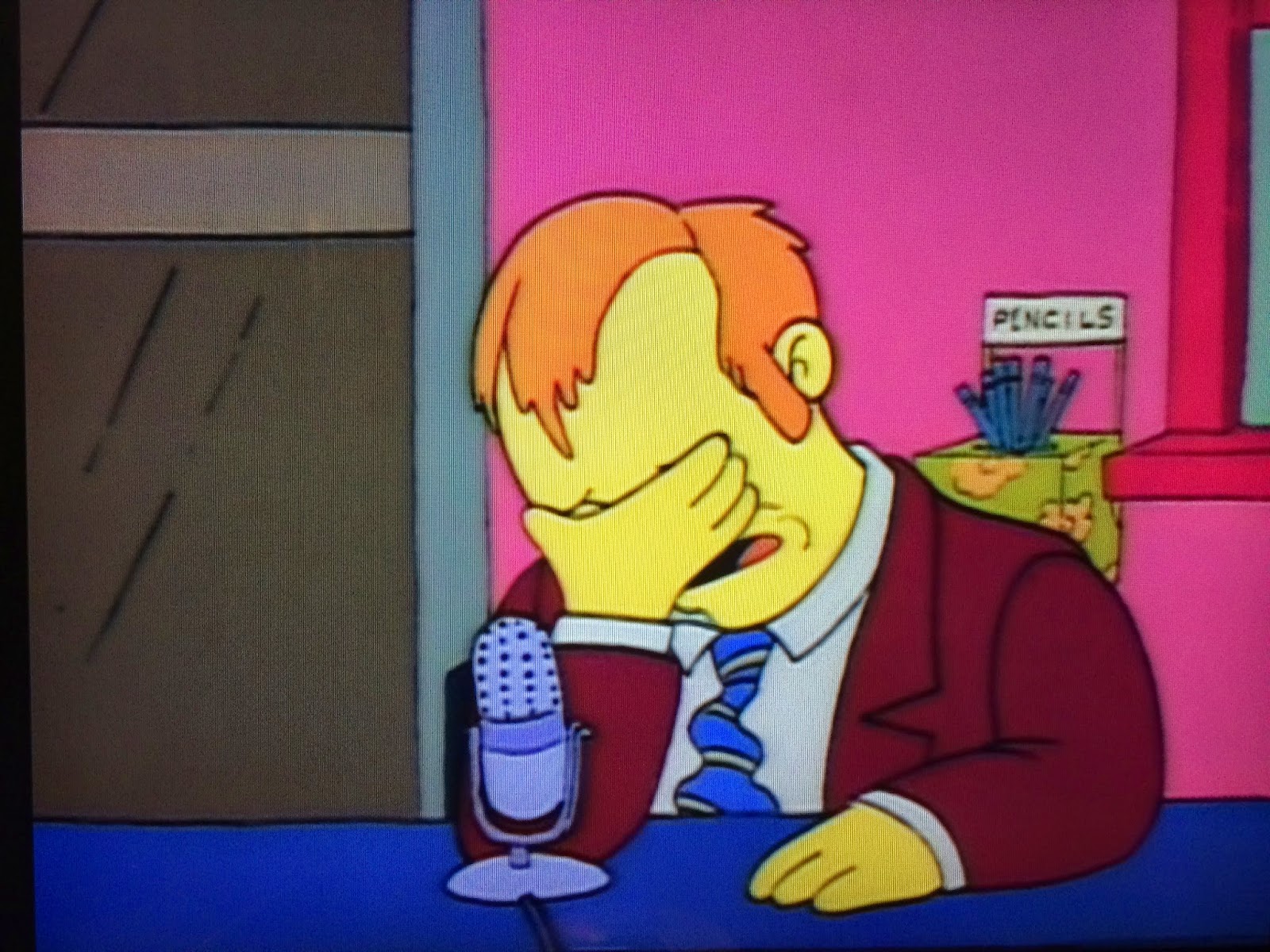 I've loved this episode for over two decades of my life and only now that I have a dual Bachelor's in Political Science and International Relations do I get this joke and it's GLORIOUS. The Brit is overcome by a "display of gallantry and sportsmanship" whose only rival is THE BRITISH EMPIRE GRANTING INDIA ITS INDEPENDENCE. My heart, you guys...

-Lisa: "Why do I get the feeling that someday I'll be describing this to a psychiatrist?" 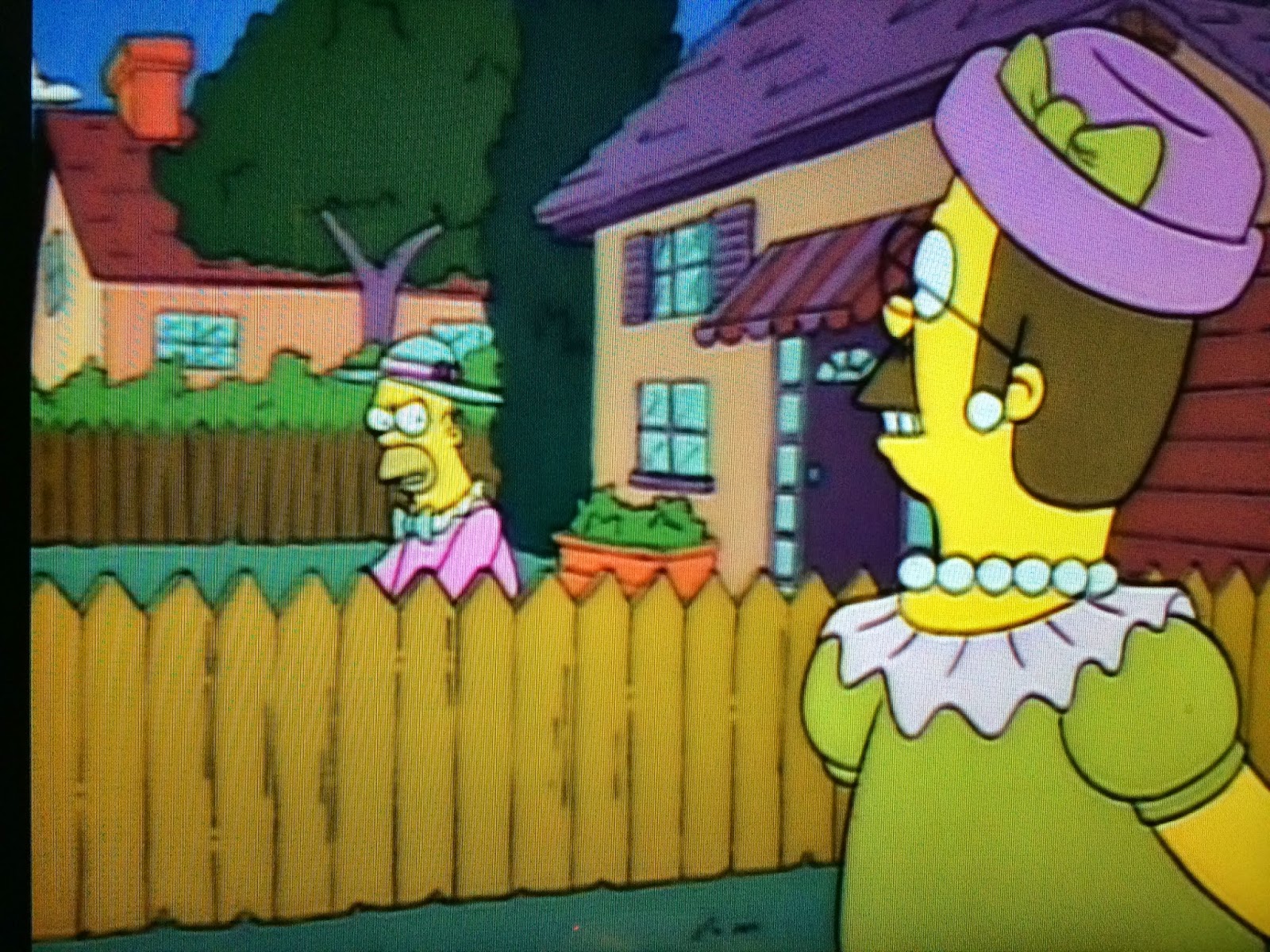 (ALL images, as always, belong solely to Twentieth Century Fox)