By Vundablog March 02, 2008
In the past couple of weeks, I've come across quite a few first issues. So I thought now, would be a good time to let you all know what I think.
Dr. Who #1 - I have never seen an episode of Dr. Who and I still enjoyed this comic. It did a pretty good job of introducing me to the world and rules of the Doctor Who universe. I never felt lost a si was reading this. The story itself was self contained and pretty decent. Will I pick up issue 2? I don't think so. If it comes out on a light week, when I'm only picking six or sev
en comics, I might grab it. All in all I wasn't blown away by the Dr. Who concept and character. I'm an American. I'll read Star Trek
Zorro #1- I picked this book up because I love Dynamite's take on the Lone Ranger. Everything that made that comic engaging, fun, and cool is not present here. Zorro is the complete antithesis of Lone Ranger in story style and execution. Lone Ranger is told in real time the origin unfolding naturally through the first arch of the series. Zorro's origin is given nonsequentially and sporadically. As news of Zorro's exploits reaches a platoon of mexican soldiers. My favorite thing about Lone Ranger is that the dialogue is witty and sparse the art is allowed to carry the story and events unfold in action. Zorro is filled with dialogue and captions. It takes a long time to read and never develops a good pace. In hindsight it was stupid of me to think that Matt Wagner was going to write a book like Brett Mathews. I'm going to pick up issue 2 of this book to see if the story improves. 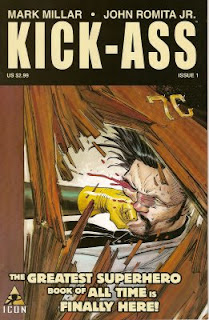 Kick Ass #1 - The caption on the cover says "THE GREATEST SUPERHERO BOOK OF ALL TIME IS FINALLY HERE" but it's not. I t wasn't the greatest superhero book of all time but it was a pretty damn god one. The story is told efficiantly and with a lot of humor. I did find to be very true to life. The main character of Dave was interesting and easy for any comic book nerd to identify with. The idea of the book is simple, and it's something I  have thought about before. Why doesn't some one just become a superhero? All they have to do is put on a mask and beat people up its not out of the realm of reality, it's doable. The art is really fantastic and there is so much humor in this book. I really don't want to spoil it for anyone. Just pick it up, read it, and you will enjoy it. You need to know absolutely nothing about comics to enjoy this book. I'm onboard.
Accidental Acquistions
Last wednesday I accidentally picked up these books. So i thought I'd talk about'em. 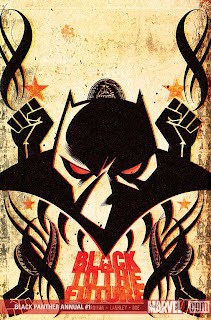 Black Panther Annual #1 - I have never picked up an issue of Black panther before, but the cover called me to it. This is a great comic book cover. First of all it stands out on the rack. I mean a huge Black Panther emblem surrounded by Black Power fists is pretty bad ass. The title of this story is "Black to the Future" once I read that and the last page to see if there a The End,  I was ready to buy It. It's a one and done story telling  a "what if" story about the Black Panther's future and the history of Wakanda. I recomend it.
JLA Classified #53 - This book somehow slipped under my radar and was accidentally put on my hold list. I'm glad I don't read JLA Classified on a regular basis. This was part four of a five part arch. Surprisingly I wasn't all that lost while reading it. The story is a slugfest between the JLA and some god like alien named Titus. After fighting with the JLA Titus offer's them god hood and tells them they can rule the world and care for humanity. The Justice League turns down his offer and they go back to fighting. I didn't enjoy this, I felt some of the characterizations were wrong and that Titus's is character design is basically Kalibak wearing some of Cable's hand me downs. I won't be picking up the next issue.
commentary relevant issues

Greg said…
That really *is* an attention-grabbing bit of cover art! Honestly, I thought it was some bat product at first, but I guess the ears are a little short.