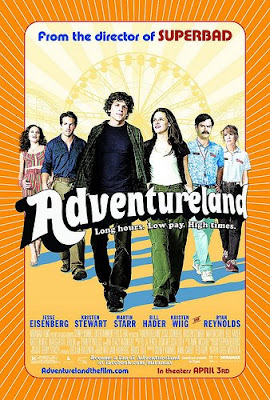 Let's get popping indy style with Mottola's latest film Adventureland. Adventureland feels like a worthy sequel to Apatow's Freaks and Geeks tv show which is also about being a teenager in the eighties. Adventureland focuses on a college grad with wanderlust trapped in ana amusement park job over the summer when he should be backpacking through Europe with his college friends. The film is most definitely a dramedy. 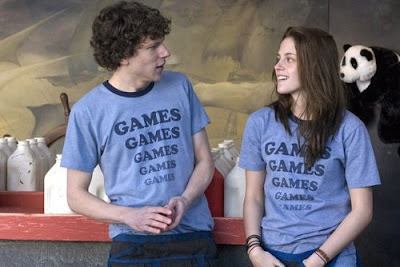 Like most dramedy the cast is very much the star of the film. Hader and Wiig steal the movie as the odd amusement park owners and managers. They are strict but oh so understanding and seemingly the perfect bosses. 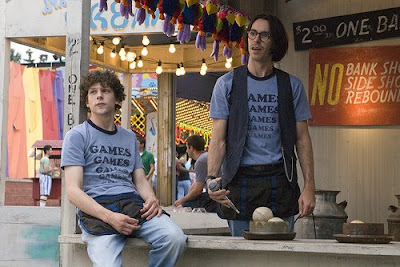 Martin Starr gives an amazing performance as Joel the pipe smoking awkward literature nerd at the park. Kristen Stewart who I despised in Twillight truly delivers a complex and seductive performance as the love interest. 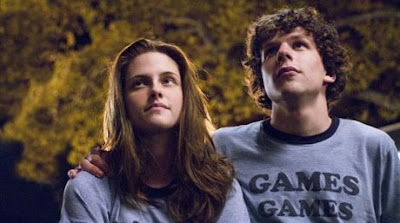 She makes the audience fall in love with her. Her insecurity, naivete, music taste, and general 80's rocker chick style really sell her as a special girl. 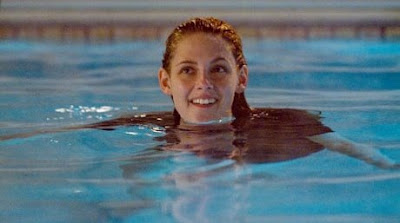 Eisenberg carries the film well and delivers a good standard coming of age film performance balancing comedy and real emotional pain. Ryan Reynolds also plays a park maintenance man with a alot more grace and coolness than you'd expect from the man who starred in Waiting. All around I love this film it is all heart with enough style to make it hollywood. I'm a big fan of Adventureland and I highly recommend it.
advantureland bill hader coming of age films Greg Mottola jesse eisenberg kristen stewart summer movie season 09