Good evening people, I just woke from a zombie like sleep and decided it was time to blog. This is part 3 of my series where I countdown my 'Top 11 of 2011'. This top eleven will be my best movies of last year. A lot of good movies came out last year actually, I was very impressed, lets see if I remember them all.

Once again this is in no particular order, I just went with my ooh factor on these.

1. The Girl with the Dragon Tattoo - David Fincher - I had seen the Swedish version and fallen in love with Noomi Rapace but there was something so magnetizing about Rooney Mara that in some ways I prefer her performance, or perhaps it's just more fresh in my mind. Frankly, I think Rooney should spend the rest of her life with five piercings in her face and black hair. David Fincher and Trent Reznor's score really capture the under tone of unsettling darkness that this story has, the idea that there is something twisted about humanity and Lisbeth can see through people. I love that she is this subversive moral compass, worming her way in to people's lives illegally and discovering their darkest secrets. Daniel Craig was also a pitch perfect Blomkvist. This movie just had a very nice aura of cool around it. I believe this story to be one of the great mystery crime dramas of our time.

2. Hanna - Joe Wright - I watched this movie late at night by myself, thinking I would use it as a vehicle to fall asleep. Instead I was captivated by the story of this little girl, the pale starkness of the landscape and production design was an amazing backdrop to the sharp and bright violence of the story. This had great action, great suspense, and a child character that was at times ambiguous, and at times as innocent as she appeared. Kudos to Saoirse Ronan for a 'tour-de-force' performance. I've always wanted to write that.


3. Mission Impossible: Ghost Protocol - Brad Bird - Brad Bird is the man. When it comes to superhero like action he knows how to do it well, he manages to give characters a human face among all the explosions and building climbing going on. This movie also has Simon Pegg who is one of my favorite people living today. I saw this in IMAX, and I don't think I could ever watch it again on a normal screen, when you literally get the feeling that you are about to fall off the tallest building the world, you can't go back to normal suspense. Can't wait for 'Dark Knight Rises' on IMAX!!

4. Thor - Kenneth Branagh - First let me say, that I LOVE Kenneth Branagh, I am a Shakespeare slut so after all of his awesome work with 'The Bard' I am fully behind all that he does. Plus he was great in 'Rabbit Proof Fence'. Thor was a surprise to me, I really did think I was going to enjoy  this addition to the Avengers  because it seemed such an easy trap for really corny cheesy mess( Poor, poor Green Lantern) but it was entertaining, set up the rest of the series and really got the ball rolling for the Avengers movie coming out this summer. Excited!!

5. Bridesmaids - Paul Feig - This movie was laugh out loud amazing. This is the girl comedy girls have been waiting for. It's funny, it's not condescending, it's honest, and Kristen Wiig was so likeable as a character, I almost cried as she made her sad little beautiful flower cupcake. Melissa McCarthy is one of my new favorite comedians, her physical comedy makes me snort milk out of my nose.

6. X-Men: First Class - Matthew Vaughn - Another suprise for me in the comic book movie universe. I did not expect this to be good even though it has James McAvoy and Michael Fassbender, two of the most attractive men I have ever seen. This movie turned me on to the idea of period piece superhero stories, a pleasant surprise from some of  the over teched out contributions of recent years (Yes we get it, science is awesome). While this got a little slow in the middle, it was still a great story and beautiful to look at. January Jones was the perfect Emma Frost, seeing as how her appearance readily adapts to the idea of the frigid blonde ice queen. There is something way too disconcerting about white people that are so damn white, you look like vanilla ice cream that's about to stab me to death, this is why I'm so glad Nicole Kidman went back to being a strawberry blonde.

7. Super 8 - J.J. Abrams - I love J.J. Abrams, I loved this movie, these children talented to the point of creepy, and the nostalgic feel of this movie made me happy.

8. Drive - Nicolas Winding Refn - Devin Faraci had this to say about Drive: (and also has a pretty great Top 10 list for 2011 as well) : "Where Spielberg goes right for the heart, Refn goes right for the corner of the lip where James Dean’s cigarette dangled." His synopsis of the film is almost as great as the film itself, which is one of the coolest and most beautiful movies of 2012. I was captivated by this movie, and I think I need to see it about three more times.

9. The Muppets - James Bobin - This is one of those films that just makes you happy. The return of the Muppets is one of the happiest moments of my life honestly, Kermit will forever make me smile. The music is by Bret McKenzie, of 'Flight of the Conchords' fame and I think that he deserves an Oscar nod for "Life's a Happy Song" and "Man or Muppet". I recently revealed that I saw this movie in an altered state, and let me tell you, this movie is great when you are in control of all your own faculties, but it is ten times BETTER when you are not, you will never experience such pure euphoria at a movie theather. I highly recommend it.

10. Young Adult - Jason Reitman - I loved this movie because it was a fantastic chracter study of a protagonist so inherently antagonist. You don't like Mavis Gary, but by the end of it, you HAVE to feel a bit sorry for her. Charlize Theron plays her without fear, she is open and raw about all of Mavis' worst traits and saddest qualities. The scene where she cannot understand why the range of emotions sheet Beth (played sweetly by Elizabeth Reaser) does not have a space for neutral or indifferent is more telling to her character than the entire film. Patton Oswalt is also my favorite comedian and he played Matt Freehauf with his patented sweet cynicism. You have to love Patton. I think Charlize may get an Oscar nod for this performance.

11. Don 2 - Fahran Akhtar - Why Don 2 you may ask? WHY THE HELL NOT, I say. This movie was two hours of pure delicious over the top silliness and great action. I wanted badly to put a foreign film in my list and this is one of the few I actually caught this year, (still have not seen Pedro Almodovar's 'The Skin I Live In' much to my consternation) and while this is not going to be on any "Top Ten" lists this is going to be on MY Top 11 list simply because it was a fun ride from start to finish. Shah Rukh Khan is one of my new favorite people going in to 2012, simply because I believe he is the saint of Bollywood(Read his Wiki sometime) and a great actor(See 'My name is Khan' for evidence of his actual talent). See this movie and laugh and dance and enjoy. This movie is the biscuits. Stay tuned for my more in depth review of 'Don 2' in my new segment "Now and Then". 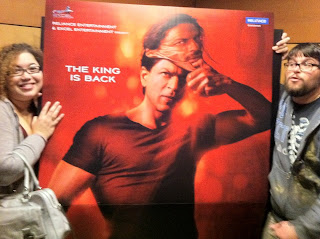 I was thinking of doing honorable mentions, but there are a LOT of movies that I liked and have seen, even more that I wanted to see and have not, so I think we are at an impasse entertainment. Get back to me in six months.
2011 film news lists top 11