Am I the only person I know who thinks what Obama is doing with his budget proposal right now is utterly brilliant?

Let's take a look at this logically for a minute.  It seems pretty obvious to me that this is a purely political move (more of Obama's famous three-dimensional chess) geared at positioning his party for political gains next year.  Think about it: do you really think he honestly believes even for a second that this budget (or, really, ANY budget he produces) is going to pass?  Republicans want deep cuts to spending and entitlements--non-starters for Democrats--and Democrats want modest spending cuts to be accompanied by new revenue and some modest new investments--non-starters for Republicans.  It would be nearly impossible to create a budget that pleases 60 Senators and 218 House members.  And the president knows this better than anyone.  And so he's chosen to use his budget proposal not as a policy document or even a statement of values but as a political weapon.  A weapon that may well fracture the GOP caucus and soften up Republicans for the coming debates over gun control and immigration--and possibly help Democrats gain ground in 2014.

Listen very closely: Chained CPI is NOT going to happen.  The President knows this.  He knows there's no chance in hell congressional Republicans will accept this compromise.  He knows that even if House Republicans call his bluff, Senate Democrats will block any cuts to Social Security.  He's playing both sides against each other: on the one hand, he's demonstrating Republicans' radical unwillingness to deal in good faith by showing how much heat he's willing to take from his base in order to get a deal done while Republicans balk at "modest entitlement reforms" and ANY tax increases; on the other hand, he's giving Democrats something to run against in 2014, elevating the national debate over "entitlement reform" by begrudgingly putting his name on the Social Security and Medicare cuts Republicans have long been clamoring and voting for in the vacuum of the House chamber.


Just look at the gargantuan grassroots mobilization currently being undertaken by liberals with broad public support.  Look at the mainstream media FLOODED with stories about Obama's proposed cuts to Social Security and Medicare and the outrage they're causing.  You really think there are still 60 Senators and 218 House members that want to go on record voting for cuts to Social Security just a few short months before they have to start campaigning for all 435 House seats and 33 Senate seats?  Especially now that Obama has brought the debate over Chained CPI to the forefront?

Even the Chairman of the Republican National Campaign Committee (you know, the guy leading the effort to elect as many Republicans to Congress as possible next year) has already come at Obama from the left, calling his budget a "shocking attack on seniors" prompting Speaker John Boehner to publicly (and privately) express his disagreement (when asked during a press conference if he would "call on Republicans next year not to attack Democrats" for cutting Social Security, Boehner replied: "Chairman Walden and I had a conversation and I'll leave it at that."  This proposal is already fracturing the Republican party.  Who knows how Republicans will run on Chained CPI next year?  If they oppose it, they risk backlash and possibly a primary challenge from their own party.  If they support it, they risk an entire election cycle full of TV ads about how they want to let grandma die.  We do know how Democrats will run on it--which is to say: away from it.  And if they win back the House or build on their advantage in the Senate by running against Chained CPI, don't be surprised if Obama gets at least some of the credit.  Either way, I can assure you that the president knows exactly what he is doing right now... 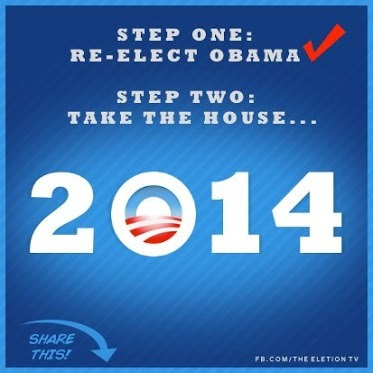