COMICBOOK REVIEW: Wolverine and the X-men #17

One man's art is responsible for me getting into comics. That man is Mike Allred. Mike Allred is an amazing artist. I've tried to share his art with others before but they couldn't quite understand the magic of Allred's art. Allred draws the comics and his wife Laura adds the color which is such a vital element to his style. It is timeless he makes every character seem like their most classical interpretation. I can't get enough of seeing him draw my favorite characters. I was in a used bookstore and the year was 2003 or 2004 maybe even 2005 it's hard to say. This used bookstore had some old comics on the wall. Three of those comics were X-statix #1, 2, and 3 written by Pete Milligan and drawn by the master Mike Allred.

This comic sung to me from the rack. I was always a big fan of the X-men and religiously followed the 90's X-men the Animated series. In Elementary and Middle School I collected cards based on DC and Marvel comics. My favorite cards were usually X-men cards, because there was always so many interesting and diverse characters to learn about. Characters they didn't put in the animated series that captured my imagination like Sunspot or Albert. The name X-statix meant nothing to me at the time, I knew it was an X-book and it had a cover full of character's I'd never heard of before. The thought of the wonder of not knowing still brings me a tingle of joy. I immersed my self in the world of X-statix which I learned had come from another book called X-force. I own every issue of X-force, X-statix, Wolverine and Doop 2 issue mini, X-staix Presents: Dead Girl six issue mini, and bevy of appearances by Doop. All of which I intend to review in one form or another before the end of my days, but for now I get to review a Doop adventure. 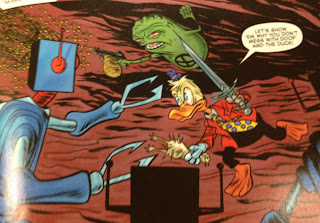 Doop was immediately my favorite character in X-statix. In that X-statix issue 1 I picked up so long ago, Doop was set up as mysterious dark, powerful, neutral, and yet still a member of the team. Doop was cameraman to the X-statix and has been revealed to be an alien(I think he's maybe an alien/mutant but I'm not 100 percent sure of that's true or not). He's great character and in this book we're reviewing we can see why.

Wolverine and the X-men #17

Doop is one of Wolverine's greatest pals.  Doop is a hard partying, artsy, urban, classy, and he can out Bond James Bond. So with Wolverine's current leadership status in the Marvel universe Doop gets to come off the bench and serve mutantkind. We begin the issue with Wolverine talking to Deathlok. Deathlok is breaking down the schools operating capacity and criticizing Doop's role on the campus. Wolverine once again vouches for the floating green spud, whose napping on duty. The narrative jumps back to a few weeks prior where Wolverine is recruiting Doop from a strip club, where Doop is drinking with a couple of lovely ladies on each arm. Doop is reluctant to team up and makes Wolverine do a series of random wacky tasks to win Doop's favor. Such as tag team lucha libre wrestling match, an Andy Warhol film marathon, and making Wolverine dress up as Cyclops for a talent show to name a few. 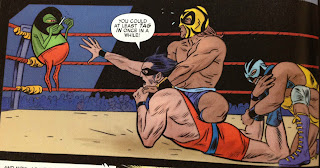 Allred let's loose with Doop never finding anything to obscure or wacky to draw. The other professors of the Jean Grey school don't understand Doop and disregard him like the students do because Doop is always passsed out and exhausted. Doop is only exhausted because he is spending all his time defending the X-men from the threats that are either to big or weird for them or beneath them. 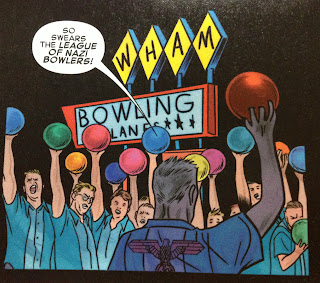 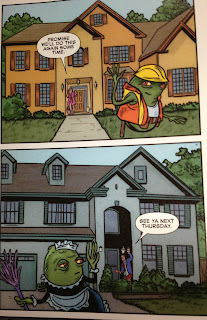 Doop takes out Nazi Bowlers, stops the town from starting witch hunts against the X-men by culling dissent with both violence and his powers of sexuality.
Doop apears to have travelled back in time and saved the Xavier bloodline in the 1600's, Doop throws down with Sabretooth, fights the Moleman's monsters, and even quells internet dissenters. Doop is a true hero and totally unsung, except for the appreciation of his last friend Wolverine. Doop never gets a moments rest being bombarded by danger room tests and school chores.

Allred even draws Doop besting the Devil in a music competition like Charlie Daniel and Tenacious D. Allred draws in a ton of awesome cameos from Deadpool, Man-thing, Gambit, She-Hulk, Howard the Duck, Sabretooth, Cannonball, Lockheed, and Tigra to name a few. Allred and his wife are also working on FF currently. Which has been a lot of fun and stars Medusa, She-Hulk, Antman, and Miss Thing Darla Deering. It's another team book and Allred captures the fun magic he gives me with X-statix. I'll probably put up an FF review once I feel like an arch has finished that I can talk about. 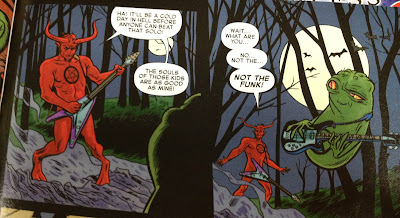 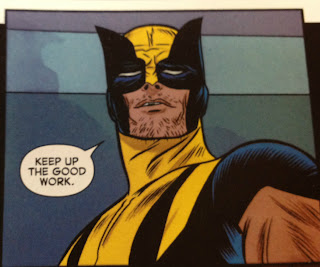