Walt's going to draw a couple of Dick's today. Some Dick Grayson's of course. In his two greatest forms as the Boy Wonder Robin, and as Bludhaven's grim disco defender Nightwing.

Walt's preferred Nightwing is the disco collar Nighwing, from his debut. I dig the version of Nightwing's outfit they had in he BTAS. I like the blue symbol over the red one, because the red one reminds me of Chris O'donell as Robin. Though I understand the idea behind the red as oppose to light blue, as his old Robin costume is red. 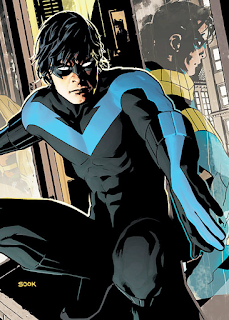 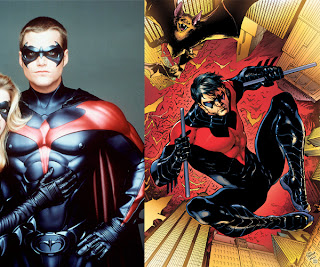 However, I think Nightwing is Dick really redefining his personality, so I like that he is the combination of Batman's black and Superman's blue. Since Nightwing was the original name Superman fight's crime as in the bottle city of Kandor. Dick chose that name to honor his two mentors Superman and Batman.

His old school Robin costume is classic and doesn't feel unrealistic to me. I think that Burt Ward maybe responsible for that. He wore the costume so believably and unabashedly, you can imagine some kid working with a crazy super hero, would think this was cool. Kyle Higgins was on Fatman on Batman and he is like an oracle of Richard Grayson, check it out.
dick grayson kevin smith nightwing robin Satuday Smodcast Share Time smodcast SMODCAST Saturday share time smodco cartoon show walt flanagan