By Vundablog August 09, 2008
Pineapple Express did not deliver for me. I was very hyped for this move. I loved Superbad and I am a big Apatow fan. I thought this movie was going to blow Step Brothers away but it didn't at all. The wierd thing is that i hated this move and Ebert liked it, and I loved Step Brothers and Ebert ripped it.
PINEAPPLE EXPRESS!!!

6. Poor Plotting - A film that mixes genres successfully is From Dusk Till Dawn the first half is action the second horror. The style changes halfway through and there's never any foreshadowing or tease that the characters can expect to run into vampires it just happens. Like it would in real life. This film doesn't do that. Going from stoner comedy to buddy action isn't smooth at all. They just begin flailing about punching and shooting each other out of nowhere. The action or tension never rises. In action movies things usually escalate in this movie things only fizzle out.
5. 4o minutes too long -The film is 15 minutes too long but it feels like forty. A comedy shouldn't be more than 90 minutes especially a bad one. The film drags maybe its the plot that never seems to develop a goal or motivation beyond find those guys. 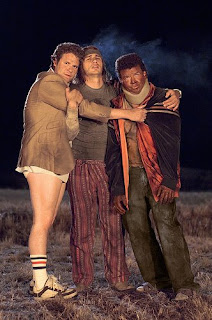 4. Rogen and Franco - - Rogen's Dale Denton is hard to like. He has a girlfriend in high school which requires some suspension of disbelief. His dialogue just doesn't work with him in the lead. Superbad, and Knocked Up were ensemble enough that everyones acting and screen time is equal so you never really get sick of anyones one dimensional personality. In this buddy flick Rogen and Franco own the screen time and they got on my nerves. There is only so much ineptitude I can stand to watch. 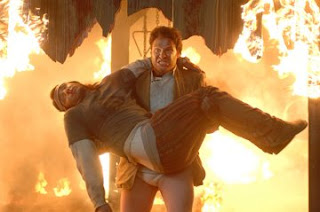 I love Franco I think he is the best actor of our time His portrayal of James Dean is magnificent and his work on Freaks and Geeks is so honest he looks like he's in a documentary half the time. This movie doesn;t show off his range. It doesn;t even give him that out there a character. Saul Silver is basically a quiet drug dealer who is contemplative but quick to action. He isn't horrible but he isn;t all that great in the flick. 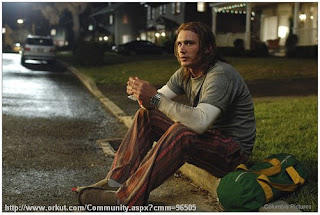 3. Red - Red is played by Danny Mc Bride and he is hilarious. He almost saves the movie. He is probably the only good performance in the film simply because he has a schtick. Therest of the movies villains are lame and kind of standard. 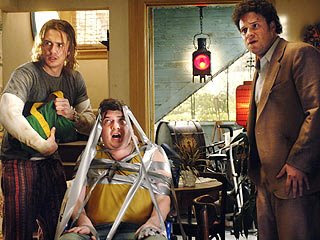 2. Shitty Action - This films intent seems to me, to be to marry the stoner comedy genre and the buddy action movie genre. In doing so it serves neither master. The action is lame, and not in a funny lame like Steven Seagal where its funny because it takes it self overly serious. It's lame because it's really trying to be cool but is only mediocre. I've seen better production value on tv. The Killpoint which was a mini-series on spiketv which proably didn't have half the money this flick had, had superior action. 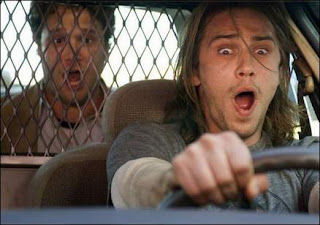 1. It didn't deliver- This movie's trailer was perfect.
It had an awesome song, the promise of cool action, and few laugh lines. It is still probably my favorite trailer of the year. However, MIA's Paper Planes is never used in the movie only the trailer. I guess this is good because they probably would have wasted it and now some other director like Guy Ritchie, or Rob Zombie can take it and use it for one of their films right.
What did you think?
Did I dissuade you enough?
Are you still interested in seeing Rogen's Green Hornet?
6 reasons summer movie season 08

Anonymous said…
Saying that you disliked this movie just further proves that you're a pretentious asshole. Figure out how to properly use the term "requires some suspension of disbelief". Hello! McFly! when people suspend their disbelief, what happens? They begin to believe things!
Oh, and you liked Step Brothers better? That makes you a fucking retard who can't enjoy a movie unless someone flashes some testicles onscreen. Homo.
You say: "There is only so much ineptitude I can stand to watch."
Step Brothers was a movie about two 40 year old retards that make dick jokes all the time. Get off the fucking internet.
August 10, 2008 at 4:25 PM

Stephen said…
i'm not a pretentious asshole thank you for your patronage and good day sir.
August 11, 2008 at 9:54 AM

Levitra said…
The principal reason for which I hate this film is because the starring is terrible, I honestly expected more from them all.
October 6, 2010 at 10:20 AM